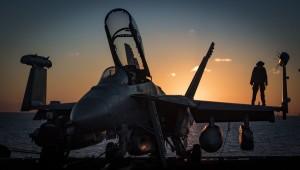 n 2014, the nation watched in outrage as the Veterans Affairs scandal erupted in Phoenix. When the widespread failures surfaced and later VA Secretary Eric Shinseki resigned, a massive void was left to be filled and a huge undertaking needed to turn around the second largest government agency. VA’s brand was shattered. Every veterans group in America was pleading for overdue reform and a 21st century VA. The time was ripe to achieve it. | CNN >>

Pentagon audits found widespread problems in enlistment bonuses given to soldiers in several National Guard units across the country, but soldiers facing repayment demands in those states won’t be eligible for waivers under a new federal law that will apply only to the California National Guard. The bonus mistakes appeared less common than in the scandal that has rocked the California Guard, although the Army Audit Agency looked only at a small sample of the bonuses and only at four states. | The Los Angeles Times >>

Who knows what President-elect Donald Trump and hip-hop artist Kanye West were talking about today at Trump Tower. But the visual got the backs up of two national veterans groups, which either feel that Trump hasn’t given veterans issues enough personal attention since Election Day or are critical of him for reportedly declining daily intelligence briefings. The chief executive of Iraq and Afghanistan Veterans of America responded to news of the Kanye encounter this way: | The San Diego Union-Tribune >>

In the offices of a Kurdish government ministry created to promote ethnic and religious harmony, a Jewish man — one of the last in Iraq — reflects on his nation’s past of persecution and a future darkened by ISIS. “Iraq,” says Sherzhad Memsani, “is a graveyard for ethnic and religious minorities. We never expected another Holocaust would happen. But it did.” ISIS killed and tortured Iraqis who did not subscribe to their extreme brand of Islam. Thousands of others fled their homes to escape the militant group’s brutality. Now, some of Iraq’s religious and ethnic minority communities teeter on extinction. | CNN >>

On a cold December morning in a remote corner of America’s largest military base in Afghanistan, three U.S. servicemembers attach a 250-foot-long cable to a cargo container. A Chinook helicopter then lifts the payload off the ground and carries it into the distance. Sling load operations like these, which involve hooking items beneath a helicopter so they can be transported to other sites, are increasing at Bagram Air Field as more U.S. troops are being called to smaller, outlying bases to support Afghan forces in fighting a resurgent Taliban. | Stars and Stripes >>

Even as ISIS (aka Islamic State or Daesh) looks set to lose control over the Iraqi city of Mosul, observers are warning of the danger of more insurgencies springing up in Sunni-majority areas of Iraq which remain alienated from the Baghdad government – in effect, this suggests Iraq could repeat the disastrous train of events from 2007, which saw the US military ‘surge’ defeat Al Qaeda in Iraq only to pave the way for ISIS. | Forbes >>

U.S. Defense Secretary Ash Carter is convening his final war-planning conference with core members of the anti-Islamic State coalition, dogged by questions about what Donald Trump’s arrival in the White House next month will mean for the future of the coalition. Closing out a nearly two-week overseas trip that included a stop in Iraq, Carter was meeting Thursday with his counterparts from 14 nations. They are to receive an update from Army Gen. Joseph Votel on the battles to retake Mosul, the Islamic State’s key stronghold in Iraq, and Raqqa, the self-declared IS capital in Syria. As head of U.S. Central Command, Votel is the top officer overseeing the counter-IS campaign in Syria and Iraq. | Fox News >>

Fighter pilots from all over the country are taking off from Tyndall Air Force Base for the next couple weeks. For the second time, Tyndall is holding Checkered Flag exercises on base. “The opportunity to train together is key because it builds teamwork and makes us integrated, efficient, effective and into an effective fighting force overall and far more lethal as a consequence, good for America,” said Colonel Randy Cason, Commander, 44th Fighter Group, Tyndall Air Force Base. | New Channel 7 WJHG >>

Connecticut-based Sikorsky Aircraft Corp. has agreed to settle wrongful death and negligence claims in a lawsuit filed over the 2014 crash of a Navy helicopter that killed three of the five crew members on a training exercise off the coast of Virginia. Sikorsky has reached a “settlement in principle” with the widows of the three crewmen and a survivor of the crash who filed the lawsuit in federal court in Connecticut last year, according to court documents obtained by The Associated Press. Terms of the deal have not been disclosed and await approval of a judge. | The Navy Times >>

Charles Claybaker was born in St. Petersburg at Bayfront Hospital. He met his wife, Kandice, at Boca Ciega High School. He knew he always wanted to give back to his city. He just didn’t know he’d be giving back with backpacks. “When I started this, I was actually shocked to see how many homeless shelters there are in Pinellas County,” said Charles, a former Army Ranger who is disabled due to a plane crash in April 2010. “We have a huge homeless issue … That’s unacceptable. As a veteran and as a ranger, that’s unacceptable.”| CBS10 Tampa Bay >>

After four years and countless hours working on restoring and retrofitting his truck to help veterans with PTSD, Jason Velez of Roy, Utah, was invited to be a feature vehicle exhibitor and contestant in the Battle of the Builder at the 2016 Specialty Equipment Market Association Show in Las Vegas last month, the foremost automotive specialty products trade event worldwide. Receiving an invitation to SEMA is a rare honor Velez said, especially given he built the truck on his own from his driveway, without the luxury of a large team of builders, which is usually the case for any vehicle presented at SEMA. | Aerotech News >>

The focus of Leibrock’s Oxford research will be on European Union data privacy and U.S. Homeland Security. “I intend to focus my research and teaching in the topics of terrorism, surveillance/privacy and information security at the U.S. and international level,” Leibrock said. “I want to blend both undergraduate and graduate courses making use of case-discussion and flipped classroom pedagogies.” Leibrock is a disabled war veteran who served in Afghanistan and Iraq. He earned his first doctoral degree from the University of Texas in computer science. | Idaho State University >>