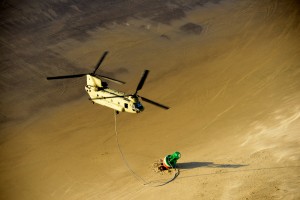 An aircrew aboard a U.S. Army CH-47 Chinook helicopter, from Joint Base Lewis-McChord, Wash., prepares to take the load of a 14,000 pound buoy that washed ashore just south of the entrance to Tillamook Bay, in Garibaldi, Ore., Dec. 12, 2016. PO1 Levi Read/Coast Guard | Military Times >>

President-elect Donald Trump met with rapper Kanye West, but hasn’t faced veterans yet. Rapper and fashion designer Kanye West was seen entering Trump Tower in New York City on Dec. 13 for a meeting with President-elect Donald Trump. After a 15-minute encounter, the pair posed for a photo and West went on his way while Trump wished him well. The reason for the visit is unclear, and they did not take questions from reporters. | Task and Purpose >>

The legislation named for the leaders of the Senate and House veterans affairs committees — Sen. Richard Blumenthal, D-Conn., and retiring Rep. Jeff Miller, R-Fla. — was sent to President Barack Obama after the Senate approved it on Saturday morning. Pieces of the 57-page bill were taken from the 400-page Veterans First Act, which the Department of Veterans Affairs and veterans groups collaborated to create. The Veterans First Act passed the Senate Veterans’ Affairs Committee unanimously in June, and then stalled. | Stars and Stripes >>

The House Veterans Affairs Committee is demanding that Veterans Affairs Secretary Robert McDonald answer questions about a veteran whose body was left in a shower room at the C.W. Bill Young VA Medical Center hospice for more than nine hours in February. The veteran, whose name has not been released, died Feb. 1 at the hospice and an internal investigation found that some staff violated hospital and VA rules then tried to cover up their mistakes. Two employees were fired and several others were disciplined, according to hospital officials. | Tampa Bay Times >>

An Afghan police officer shot and killed one foreigner and wounded another at a security checkpoint outside the Kabul airport on Wednesday, a security official said. Authorities were investigating the incident but declined to comment on the nationalities of the individuals. Police stepped up security at Kabul airport on Wednesday for the arrival of Afghan warlord Faryadi Zardad, deported from Britain after serving a prison sentence for torture. | Reuters >>

The Islamic State group was manufacturing weapons in and around Mosul on an industrial scale with products largely purchased in bulk from Turkey, according to a report published by an arms research group Wednesday. The findings show that IS maintained a “robust and reliable” supply chain between Turkey and Iraq that allowed the fighters to produce tens of thousands of weapons, the London-based Conflict Armaments Research said. | The New York Post >>

A politician here said Tuesday that he was tortured and sexually abused while being held hostage by Afghanistan’s vice president, the latest development in a sordid episode that has raised serious questions about the rule of law in the country. Speaking with local media, Ahmad Ishchi leveled the accusations against Abdul Rashid Dostum, a former warlord and militia commander who holds the title of first vice president. | The Los Angeles Times >>

Election night came as a shock to many in the nation’s capital. Military planners want to make sure there aren’t any such surprises on Inauguration Day. On Wednesday, officials and military organizers held a walk through of logistics for transition officials and media members, complete with a map of Washington, bigger than the Oval Office to illustrate their security plans. “Whatever the number is, the U.S. military and National Guard can support our partners,” said Army Brig. Gen. William Walker, commander of Joint Task Force-District of Columbia. “We have the ability to surge. We have the ability to shift. | Military Times >>

The U.S. Marine Corps announced Wednesday it would temporarily ground all Japan-based MV-22 Osprey aircraft after a crash Tuesday six miles off the coast of Okinawa. The Osprey, which can take off like a helicopter and fly like a plane, was conducting a nighttime mid-air refueling operation over the Pacific when the rotor blades struck the refueling line, damaging the aircraft, Lt Gen. Lawrence D. Nicholson, the Commanding General of III Marine Expeditionary Force, said at a news conference. | Fox News World >>

The June crash of an Air Force Thunderbird jet in Colorado Springs is being blamed on a throttle malfunction, according to an accident investigation report released to The Gazette on Wednesday. The June 2 crash of the F-16 fighter in a field just south of the Colorado Springs Airport destroyed the $29 million plane, but the pilot safely ejected. | Colorado Springs Gazette >>

Chris Curtis is stationed in the Eagle Transport Terminal in Kingsport, Tenn., and spent nine years serving in the U.S. Marine Corps. He served two tours of duty in Afghanistan, one in Europe and one in Africa. “I am honored to be carrying these wreaths to help recognize the service of our veterans. I just hope that next year Wreaths Across America will receive enough contributions to furnish a wreath for every veteran’s grave,” Curtis said during a brief stop made by the two trucks Monday in Rocky Mount. | Rocky Mountain Telegram >>

After two DUIs and a suicide attempt, Iraq War veteran Jonathan Hancock had hit rock bottom. Deciding he needed to do something dramatic to restart his life, Hancock made plans to walk across America, reconnecting with brethren from the 2nd Battalion, 4th Marines who had fought alongside him in Iraq. He would visit mothers who had lost sons there. On Monday, 15 months and 5,800 miles after he set out from College Park, Md., on Sept. 11, 2015, Hancock, 33, completed his journey. | The Orange County Register >>