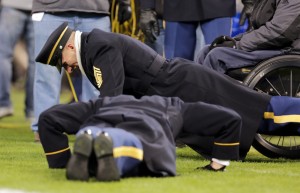 Sergeant Major of the Army Dan Dailey does pushups on the Army sideline after his team scored on Dec. 10 at M&T Bank Stadium. Jennifer Milbrett/Staff | Military Times >>

Prescription drugs received through the Department of Veterans Affairs for non-service connected conditions could cost many veterans less under a new rule that kicks in Jan. 1. Currently, the VA charges veterans who do not qualify for free health care $8 or $9 for a 30-day or less drug supply, depending on their category. Those costs were set to increase over time based on a Medical Consumer Price Index calculation. | Military.com >>

“Now they have an opportunity to get the help that they certainly deserve and they have earned and they should feel the motivation to come forward to make sure that that help is provided to them,” he said Just three days after the group appeared at the Capitol, Fairness for Veterans passed as an amendment to the National Defense Authorization Act” | KING5 >>

President-elect Donald Trump has come under intense pressure from powerful veterans organizations to keep current Veterans Affairs Secretary Robert McDonald in the job amid increasing opposition to the leading candidates to replace him in the new administration. Trump was harshly critical of VA on the campaign trail calling it “the most corrupt agency” in the country and charging that some veterans are “being treated worse than illegal immigrants.” | The Washington Post >>

Iraqi and U.S.-led coalition forces have killed or gravely wounded more than 2,000 Islamic State fighters in the battle for Mosul since October, the top U.S. commander in Iraq said Sunday. Lt. Gen. Stephen Townsend told reporters there are still an estimated 3,000 to 5,000 IS fighters defending Mosul. | ABC News >>

The Afghan government has asked the United Nations Security Council to remove the leaders of the militant group Hezb-e-Islami from its sanctions list, officials said Monday. The request follows a peace accord signed by President Ashraf Ghani and Hezb-e-Islami founder Gulbuddin Hekmatyar last September. Supporters hope the deal will encourage other insurgent groups — especially the Taliban — to join the peace process, which they say is the only realistic solution to the country’s 15-year war. | Stars and Stripes >>

An Iraqi spokesman says two suicide car bombings targeting security checkpoints in the city of Fallujah have killed at least two people. Interior Ministry spokesman Brig. Gen Saad Maan says that Sunday’s attacks killed a civilian and a policeman, and wounded seven. A local police and a medical official put the casualty toll at three killed and 11 wounded. They spoke on condition of anonymity because they’re not authorized to talk to reporters. | Fox News >>

Marines will wear woodland green year-round, effective immediately, according to a new directive from the commandant of the Marine Corps. The change was quietly announced Dec. 8 through an all-Marine Corps bulletin, signed by Commandant Gen. Robert Neller. Previously, Marines would alternate between tan-and-brown desert camouflage in the summer and green woodland camouflage utilities in the winter on dates roughly coinciding with Daylight Savings Time changes. | Task and Purpose >>

For the first time in 34 years, the U.S. and Philippines will not hold the annual amphibious joint exercise PHIBLEX in 2017, the latest sign of strain in the two countries’ relationship since Philippine President Rodrigo Duterte was elected in May. More than 1,400 Okinawa-based Marines and sailors from the 3rd Marine Expeditionary Brigade, and 500 Philippine troops participated in the 33rd annual PHIBLEX this October. | Military Times >>

President-elect Donald Trump took another swipe at a Pentagon acquisition program on Monday morning, this time taking aim at the Pentagon’s most notorious program, the F-35 joint strike fighter. At 6:26 EST, Trump tweeted, “The F-35 program and cost is out of control. Billions of dollars can and will be saved on military (and other) purchases after January 20th.” | Defense News >>

Sixteen kids went home with a brand new adaptive bicycle thanks to the non-profit REACHcycles, which held their Christmas bike giveaway at the Bon Secours Training Camp Sunday.Family members said they were overwhelmed, overjoyed and grateful by the organization’s generosity. | CBS 6 >>

A 25-year-old U.S. Army veteran was honored at a celebration in West Hills on Sunday, where he was named Penn Foster College’s 2016 Graduate of the Year.
Omar Haughton was deployed in Afghanistan in 2012, where he sustained a traumatic brain injury after being hit by an IED. During his nearly two-year rehabilitation, he earned a degree in Criminal Justice from Penn Foster College. | NBC Los Angeles >>

When soldiers return to civilian life after serving the United States, they often have to learn a new profession. When opportunity is given to become a farmer, a former soldier will use the opportunity to continue to help others. After 25 years of service in the Army, Stewart Davis retired from the military and is going to be a farmer. | High Plains Journal >>