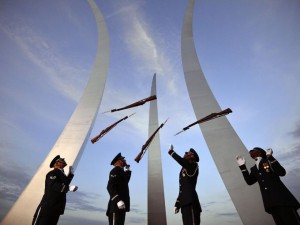 The report estimated that an average of 20 veterans a day died from suicide in 2014, or about 7,300 in the year, compared to a previous estimate of 22 a day. But researchers have cautioned against relying too heavily on that figure to indicate trends in suicides because it does not take into account that the overall number of veterans is declining because of deaths from old age. | Huffington Post >>

The voluntary VA project, called the Million Veteran Program, or MVP, started in 2011 and hit the half-million mark nationwide last month.bIt aims to help doctors understand the genetic component of why some patients respond to treatment, why others don’t and whether some people are more prone to illnesses. | San Diego Union Tribune >>

“We’ve hit a couple stumbling blocks in the Senate, so I have not yet gotten it to the floor for a debate,” he added. “I’m trying to get unanimous consent to do that when we get back. … We aren’t to the nobody objecting point yet. But it’s on varying degrees of change they want to make, not on being against the accountability portion.” | Federal News Radio >>

Taliban militants in western Afghanistan Thursday attacked a convoy carrying foreign tourists, including Americans, leaving at least six people injured, officials in the region told several news agencies. The tourists were in a minibus on a rural highway in Herat Province when they were hit with rockets and gunfire, The Washington Post reported. None of the injuries was said to be life-threatening, and it was unclear whether the three Americans in the vehicle were hurt.| Fox News >>

Late on in the first half Iraq’s Ali Adnan had two free kicks saved by Denmark goalkeeper Jeppe Hojbjerg as the teams went into halftime scoreless. Although Iraq was the stronger side throughout the second half, the teams remained knotted with neither finding the back of the net. | NBC >>

The fact Afghanistan attracts tourists at all may come as a surprise to some, but a number of companies offer tours to the country where there were more than 11,000 casualties of violence last year. The UN World Tourism Organization does not receive statistics from the Afghan government on tourist numbers, so it is difficult to track how many visitors are making it there. | BBC News >>

“They failed to reduce the number of uniforms sailors must maintain. Their threads put sailors at risk for worsening burn injuries by melting. And sailors said they were uncomfortable and that the only camouflage they offered was when someone fell overboard,” the Navy Times explained, rattling off complaints made countless times by sailors in the past decade. | The Washington Times >>

“(We) all took command the last week in June,” Col. Kevin J. Lambert, commander of the 1st Stryker Brigade, 25th Infantry Division, said of the drills that help prepare soldiers for readiness training at centers across the country. “So this was our first opportunity to really see our organization, let alone train the organization … Every leader ought to have the opportunity to start their tenure like this.” | Stars and Stripes >>

On any given day along the North Carolina coast, boaters are on the local waterways not anticipating a broken motor, getting off course or finding themselves in dangerous conditions. Those are the moments the Coast Guard is there. “We’re active every day. If we’re not on a mission, we’re training for a mission. We’re always ready,” said Petty Officer 2nd Class Eric Platania, an 8-year veteran of the Coast Guard now serving at Coast Guard Station Emerald Isle. | Military.com >>

Last Tuesday, 12 charter fishing vessels from the Rhode Island Party & Charter Boat Association took veterans fishing aboard their vessels out of the Port of Galilee. It was the third year in a row that veterans, many of them with disabilities, family members, friends and caregivers (about 50 of them) were out on the water with charter fishing association members in Rhode Island. | Cranston Herald >>

This program, which Cornell hosted this summer for a second consecutive year, aims to immerse veterans seeking their degrees in the college environment, using intense academic training to prepare them for the rigors of college classes, according to the project’s website. Last year also Cornell hosted approximately 15 veterans entering the University, according to Director of Education for the WSP Craig Plunges. | The Cornell Daily Sun >>

At 19 years of age, Alabama native Pamela Dockstader ’16 signed up for the United States Army. Over the course of six years repairing armament on M1 Abrams and M2 Bradley tanks and serving two tours in Afghanistan, Dockstader fell in love with the military. And while transitioning to civilian life and attending The College of Idaho, she discovered a love of microbiology.| College of Idaho >>