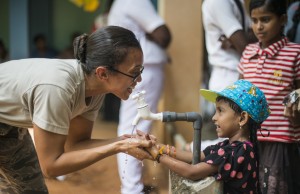 Enterprising Veterans Affairs employees took to a podium Monday in Washington, D.C. to pitch projects for improving VA health care, hoping their novel ideas would win support — and funding – for implementation across the department. | Military Times >>

In what may be the biggest online sensation since the ALS Ice Bucket Challenge, movie stars and U.S. Olympians alike have taken to the internet to film themselves doing 22 pushups— an effort to honor the 22 veterans thought to commit suicide every day. | Fox News >>

Iraq has allowed the Russian air force to use its airspace if needed during airstrikes on Syria, following Russia’s decision to deploy aircraft to Iraq’s neighbors, Iran, on Tuesday. Russian government officials have previously not ruled out expanding the bombing campaign on militants from jihadist group Islamic State (ISIS) and others, from Syria to Iraq, though Russia’s Foreign Ministry has said this would require Iraq to ask for the airstrikes first. | Newsweek >>

Fate, however, had something different in store. On a cool September autumn day in London Fatime’s first class in MBA was cut short as planes struck the Twin Towers in New York as terrorist carried out the worst strike in the US history. | Economic Times >>

The next president will face countless challenges as soon as he or she takes office. Among the biggest are the fight against ISIS, and unrest in Iraq. CBS News’ Margaret Brennan spoke with retired general and former CIA director David Petraeus about the dangers of Iraq — on day one. | CBS News >>

Navy pilots say piloting the F-35 Joint Strike Fighter on to the flight deck of U.S. aircraft carrier is almost like flying a plane that flies itself. The software aboard the new fighter could enable the military to train pilots faster and, in the event of a major conflict, possibly fly more sorties against the enemy. | Defense One >>

“The Naval Safety Center concludes that these devices pose a significant and unacceptable risk to Navy personnel, facilities, submarines, ships, vessels and aircraft,” the memo reads, going on to recommend a full ban of the products on Navy property. | Navy Times >>

It is a much slower speed at which the former Air Force colonel once traveled, a combat veteran who flew F-15s and F-16s but who today is peddling his way down the East Coast for charity. Mr. West is hoping to raise $60,000 for Folds of Honor, which provides educational scholarships to children and families of fallen service members and to disabled veterans. | central jersey.com >>

Beginning Sept. 7, a team of athletes will compete in Rio de Janeiro across 23 sports in the 15th Paralympic Games. Many of these paralympians have persevered in the face of illness, injury, and stigma to make it to this year’s games. Perhaps none more so than the 31 military veterans who are part of the U.S. Paralympic Team. | Task and Purpose >>

Solid steel, cut, scorched by fire and shaped into an American flag. In a way, Ryan Courtney’s art is a reflection of himself. A soldier in the Navy and Army National Guard, he’s been battle tested, battle-scarred and scorched by PTSD. But using art, he has found a way to let his patriotism and compassion for humanity shine once again. | Farmington Independent >>