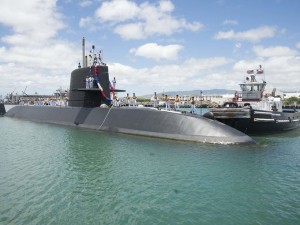 A new report from the VA inspector general released Thursday found the policy violations took place in Iowa City, Iowa, and Black Hills, S.D., The Associated Press reports. Placing patients with doctors who no longer work at the facility is a way VA administrators make it appear as though caseloads for physicians are smaller than they are, according to critics of the practice. | The Daily Caller >>

Many people see a problem and lament it; few actually have the guts to do something to solve it. Air Force veteran Jayson Browder is in the second category. While the lack of veterans in key foreign policy roles has been remarked on previously, no organizations had been founded specifically to address the problem. | Task and Purpose >>

Power cuts that last 12 hours or longer in Iraq mean that homes can become uncomfortably warm during this particularly hot summer. And for kids, that’s just awful, especially since there is already a lack of air-conditioned recreational facilities here. So many boys improvise by cooling off in the Tigris River, where they fish and play games. | The Washington Post >>

The Islamic State group, which has been building a presence in Afghanistan for more than a year, has established a recruitment and training camp in a restive southern province bordering Pakistan, Afghan officials said. | Army Times >>

Kurdish forces in Iraq say they have captured several villages near Mosul from the self-styled Islamic State (IS) group, the last major city the militants hold in the country. The offensive began at dawn on Sunday, backed by air strikes from the US-led coalition battling IS. | BBC News >>

“I was shocked like everyone else because it looked like a cloud of thousands of bees, but I knew they wouldn’t sting anyone and were just looking for a new place to live,” Tech. Sgt. Jeffrey Baskin, 192nd Maintenance Squadron crew chief, said in an Air Force story about the June 11 incident. | The Virginian-Pilot >>

The U.S. Marine Corps is looking for a few more good women. And this time the campaign is a bit different. Marine recruiters are turning to girls high school sports teams to find candidates who may be able to meet the Corps’ rigorous physical standards, including for the front-line combat jobs now open to women. | The Denver Post >>

How to insert autonomous systems into the fleet is indeed one of the subjects of debate, says naval analyst Bryan Clark, of the Center for Strategic and Budgetary Assessments. Clark and other outside experts have participated in a series of “fleet architecture studies” led by the office of the chief of naval operations. Their findings will shape decisions on how to size and organize the future fleet. | National Defense Magazine >>

At the time of the shooting, Corsa had been out of the Army for about a decade. He joined the North Carolina Army National Guard in 1997, then moved to the Washington Guard for 1999-2002, a span that included eight months in Kosovo with a public affairs detachment. He left as a private first class in 2006, after four years in the Individual Ready Reserve. | Army Times >>

Dana Liesegang was 19 years old and had only been enlisted for a few months when she was sexually assaulted by a fellow Navy sailor, thrown off a cliff and left to die. Thus began her life journey to prove everyone wrong and show others that they could recover, heal and even thrive after the odds were stacked against them. | The Daily Sentinel >>

“I volunteered for everything,” Martin said. “I wasn’t told I had to go; I was always a volunteer. (Of) course when you’re 20 years old, you think you’re made out of steel.” His service took a toll, leaving him injured and eventually homeless. “I’ve been diagnosed with PTSD (post-traumatic stress disorder). Music — that’s kept me sane,” Martin said. “There were times I was sleeping in the woods. There were times I was sleeping in a Salvation Army.” | WMUR >>