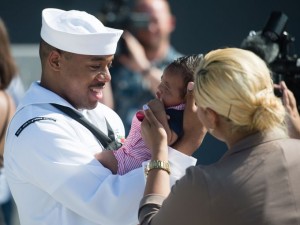 Damage Controlman 2nd Class Devin Bingley meets his child for the first time on Aug. 10 after returning from a seven-month deployment. Carrier Air Wing (CVW) 9 is disembarking from John C. Stennis in San Diego before the ship returns to its homeport in Bremerton, Washington MC3 Andre T. Richard/Navy | Military Times >>

More than two million claims for private sector emergency healthcare services provided to VA-enrolled veterans since February 2010 could be eligible for VA reimbursement if a recent ruling by the U.S. Court of Appeals for Veterans Claims is allowed to stand, the VA general counsel has warned. | Stars and Stripes >>

Women in the military who experience combat have a much greater risk than those who don’t of developing post-traumatic stress disorder (PTSD) and other mental health issues, a U.S. study suggests. Compared to their peers without any combat exposure, enlisted women who had just one combat experience were over four times more likely to screen positive for PTSD in post-deployment exams, the study found.| Fox News >>

Nathan thrived because four very disparate organizations worked together seamlessly to recognize the needs and value of transitioning service members. When it comes to veterans and military families, business and non-profit leaders should consider the three priorities the organizations followed for ensuring success with transitioning veterans. | The Huffington Post >>

The commander in charge of US forces in Afghanistan has asked India to step up military aid in the Middle Eastern country. Gen. John Nicholson’s call to action comes as Western sanctions against Russia is leading to a paucity of spares for Russian-made weaponry used by Afghan forces. | Defense News >>

Several tourist companies have emerged to take advantage of the relative stability of Afghanistan as it slowly emerges from the rubble of decades of military conflict. And it is not just Afghanistan, either. Enterprising companies have started providing adventure tours not only to the mountainous regions near Kabul, but also to the bustling neighborhoods of Baghdad, Iraq. | Business Insider >>

Iraq has reached agreement with BP, Shell and Lukoil to restart stalled investment in oil fields the firms are developing, allowing projects that were halted this year to resume and crude production to increase in 2017, Iraqi oil officials said. The agreements, reached in July and August, effectively delay to the second half of the year projects that the three companies had planned to carry out in the first half, which had been suspended because of low oil prices. | Reuters >>

Senior Air Force officials said Wednesday the Air Force will face a shortage of 700 fighter pilots by the end of 2016. That shortfall is estimated to grow to 1,000 by 2022. The gap in pilots marks a sharp increase since March, when Gen. Herbert “Hawk” Carlisle testified before Congress that the Air Force needed 511 fighter jet pilots to adequately carry out current missions. | CNN >>

For women chiefs and officers who have complained their khaki pants were outdated and unflattering, your voice has been heard. The Navy is in the midst of redesigning those much loathed slacks, and is loosening some uniform regulations in the meantime to accommodate women who can’t stand them. | Navy Times >>

As a survivor of a grenade attack in Mosul, Iraq in 2009, which severely injured his right arm, Hogg knows what it’s like to have life radically shift direction without warning. “I know what it is like to be that Soldier that literally lost everything, that thinks he lost everything” | Aerotech News >>

Ms. Francis, an Army veteran who served in Afghanistan and Iraq, at first didn’t think she would remain in New York. “I’ve lived in seven different countries and 12 different states, so I move a lot,” she said. “Because of my military history, I’ve gotten used to being flexible, and I’ve been cautious about settling down.” | The New York Times >>

Timothy McGill has participated in many cycling events since leaving the Army and moving back to Biloxi. But three tours in Iraq — two lasting a year each and one of 18 months — left him with a traumatic brain injury and physical problems. He has balance issues, back problems and short-term memory loss. | Sun Herald >>