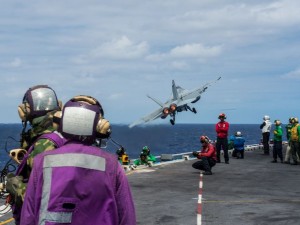 Two companies have joined UnitedHealthcare in protesting military contract awards worth up to $58 billion to manage the Tricare health program, including one of the winning bidders, Government Accountability Office officials said Monday. | Military Times >>

The Veterans Health Administration has improved the quality of and access to health care for vets over the past two years, but the agency’s continuing struggle with hiring and retaining employees is undermining its mission, according to a newly-released report from an outside organization. | Government Executive >>

While it’s possible that veterans are receiving better offers from other companies or moving onto higher-level positions elsewhere, veterans may be struggling to assimilate into civilian culture or finding it difficult to see the impact of their work. | Task and Purpose >>

Islamic State and the Taliban, after more than a year of fierce combat, have forged a patchwork cease-fire across much of eastern Afghanistan that has helped both insurgencies regroup and counter U.S.-backed efforts to dislodge them. Until several months ago, Islamic State fought bloody battles with local Taliban units over fighters and territory in several provinces. | Fox News >>

The American University of Afghanistan has temporarily suspended campus operations after two of its teachers were kidnapped at gunpoint Sunday, according to a statement released by the school. “We are devastated by the news and will remain vigilant to ensure the safety and security of all university personnel and students,” said Mark English, the president of the university. | CNN >>

Florida State University’s Center for Advanced Power Systems has been awarded a $35-million grant by the U.S. Navy – its largest grant ever – to broaden its research in creating an all-electric ship. The grant, spread over five years, is the latest coup for the Innovation Park-based research center. | Tallahassee Democrat >>

The U.S. Air Force is asking industry how it could head off looming gaps in the collection of high-priority weather data. In a broad agency announcement released Aug. 3, the Air Force said it was looking for solutions to provide cloud characterization and theater weather imagery by 2019. In 2014, the Air Force examined potential gaps in space-based weather data. | Space News >>

Following the Defense Department’s lifting of the ban on transgender service members in June, the Navy Department is preparing to provide medical and administrative support for transitioning sailors and Marines, train personnel on the particulars of serving in a transgender-inclusive force and, by next summer, accept transgender recruits into boot camp. | Marine Corps Times >>

Servicemembers worldwide are cranking out millions of pushups and posting videos of their efforts online to raise awareness about military suicide and post-traumatic stress disorder, a campaign that has crossed over into the civilian community. | Stars and Stripes >>

Marine veteran Noah Currier wants people who are facing obstacles to stay “Oscar Mike” — or “on the move.” That’s why he started the Oscar Mike apparel company. Currier, who spent four years in the Marines as an light armored vehicle crewman and rifleman, deployed to Iraq in 2003 with Charlie Company, 1st Light Armored Reconnaissance Battalion. | Marine Corps Times >>

Marine veteran Joyce Ralph sometimes stays at home in Massachusetts instead of going for a bike ride or doing other things she likes to do. She feels too anxious because of her post-traumatic stress disorder. Army veteran Paul Miosek sometimes feels isolated at his home in New York. No one else he knows is in a wheelchair. | Military.com >>