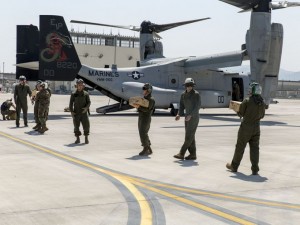 Senators Call on Obama to Investigate Military Sexual Assault
President Barack Obama is being urged by two U.S. senators to investigate whether the Pentagon misled Congress with information about sexual assault cases in an effort to undercut support for a Senate bill that senior military officials steadfastly oppose. | Military.com >>

Surgical Implant Prosthesis for Veteran Amputees
Researchers and physicians hold their collective breath as Veteran Ed Salau clicks his new prosthetic leg into place and stands on it for the first time. “Oh my gosh, I can’t believe this day is here, it’s so surreal, I have goosebumps,” says Dr. Sarina Sinclair, a key researcher on the team. | VA Blog >>

NATO foreign ministers have agreed to keep about 12,000 troops in Afghanistan through next year, while pushing forward with a funding drive to help the country through 2020. | Military.com >>

Afghan officials this week arrested a man suspected of killing two American officers inside the Interior Ministry building four years ago during a period of deadly anti-American demonstrations. | Stars and Stripes >>

Afghans are increasingly concerned about the lack of security and the country’s economy amid an escalating war with the Taliban and rising unemployment, a survey released on Tuesday showed. | Military.com >>

Iraqi police on Tuesday unearthed two mass graves in the western city of Ramadi, with bodies of about 40 people killed by Islamic State militants during the militant Sunni group’s reign of terror in the city, officials said. | AP >>

An influential Iraqi Shiite cleric on Wednesday called on the United Nations and the Organization of Islamic Cooperation to help find a solution to the country’s simmering political crisis “even through holding early elections.” | AP >>

With the counterinsurgency slog through Iraq and Afghanistan in the rear-view mirror, the Corps is retooling the way it trains Marines to deal with the threat of improvised explosive devices around the world. | Marine Corps Times >>

This past January, the Department of Veteran Affairs released a 44-page report, titled “Veteran Appeals Experience: Listening to the Voices of Veterans and Their Journey in the Appeals System,” which sought out to do just that: Listen to the veterans who are currently in or have gone through the appeals process with the hopes of discovering the best way to overhaul the system. | Task and Purpose >>

The sun is setting over the horizon here as Army Sgt. Cassandra Peel practices one of her final kicks of the day. Precision. Power. Passion. These words come to mind as she delivers one swift kick after another. It is evident that this woman is in her element. | Defense.gov >>

After living in hospitals and other people’s homes for four years, Thomas McRae said the feeling of sleeping in your own bed in your own home is indescribable. | Juneau Empire >>

The Wounded Warrior Amputee Softball Team (WWAST) will be participating in the ‘Red, White, and Blue Weekend’ at the Lubbock Christian University Sports Complex on 26th Street in Lubbock, TX. | KCBD >>

One senator on Wednesday called for the U.S. to boost its spending on defense research and development as competitors like China invest to edge out America as the most technologically superior in the world. | Washington Examiner >>

Planned Army troop cuts would be reversed under a measure that has the backing of the House Armed Services Committee.U.S. Rep. Doug Lamborn, R-Colorado Springs, said the committee-backed plan would also block a Pentagon proposal to close military bases” | The Gazette >>

Senators confirmed Michael Missal to be the new inspector general for the Department of Veterans Affairs late Tuesday, giving the embattled agency a top watchdog for the first time in 28 months. | Military Times >>