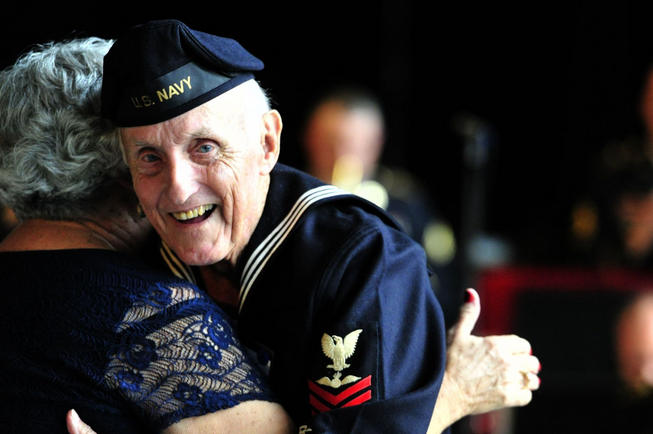 Thomas Foster, a Navy veteran from Huntsville, dances with his wife, Carolyn, as World War II veterans filled the Davidson Center during the the 70th Anniversary of the end of World War II Recognition and Thank You Celebration, at the U.S. Space & Rocket Center in Huntsville, Ala. | Military Times >>

TODAY’S TOP STORIES
Report Obscures Extent of Combat-Related Traumatic Brain Injuries
A Congressional Research Service report on casualties of the Iraq and Afghanistan wars notes how many died, were wounded, suffered major amputations or were diagnosed with post-traumatic stress disorder. But the document is unable to say how many of the roughly 305,000 people who incurred a traumatic brain injury over the last 14 years suffered the damage in the combat theater. | Military.com >>

35,000 Combat Vets Denied VA Health Care Due To Glitch
Many veterans are required to submit a means test, which assesses their household income, in order to be enrolled. But here’s the problem: It’s not required for combat veterans because they are automatically eligible for five years of free care. The document, provided by Scott Davis, a program specialist with the VA Health Eligibility Center in Atlanta and a past whistleblower, shows that 35,093 combat veterans who applied for care were flagged by the system because they did not complete a means test. | Task & Purpose >>

A panel of lawyers appointed by Afghanistan’s president to review the murder of Farkhunda, a female Islamic scholar who was killed by a mob of men, plans to recommend that those accused in her death be retried, the group’s leader said on Wednesday. | New York Times >>

IRAQ
Last week, in large part because of American airstrikes, Iraqi troops dismantled an Islamic State command base. They have retaken the University of Anbar, although American officials are unsure if the entire campus is secure. But the urban heart of Ramadi is still a no-go zone, with dug-in Islamic State fighters continuing to control the city, rigging neighborhoods throughout with explosives. | New York Times >>

Army Chief of Staff Gen. Raymond T. Odierno said Wednesday that he disagrees with Republican presidential candidate Donald Trump’s idea that the United States should go into Iraq and seize oil being used to fund the Islamic State militant group, saying that there are limits on what military power can do. | Washington Post >>

Iraq forces have surrounded the city of Ramadi and are preparing for a final assault in what will be the first significant test of American-trained forces against the Islamic State, according a senior official with the U.S.-led coalition that is supporting the mission. | USA Today >>

MILITARY AFFAIRS
Marines deploying Down Under are facing strict rules to keep their equipment clean of invasive species that might be hitching a ride to Australia. Marines’ vehicles, aircraft and other personal gear are going through tough inspections upon arrival to ensure they’re not bringing along exotic pests, weeds or diseases that can spread across the continent. | Marine Corps Times >>

The Navy is playing musical chairs and moving around three aircraft carriers in a complicated maneuver that will leave the Asia-Pacific region without a forward-deployed carrier for several months. The Navy announced Tuesday that the USS George Washington arrived in San Diego from Japan, which it left in mid-May. The carrier is heading to Newport News, Va., to begin years of maintenance. | The Hill >>

Major Gen. Jeffrey Snow is first to admit he has a lot to learn about recruiting. But the new chief of Army Recruiting Command, who took over June 23, has been moving fast. “I’m only 45 days into it, and I will continue to circulate and spend as much time (with recruiters),” Snow said during an Aug 6 sit-down with Army Times. “I want them to continue to communicate their needs and desires. That part I’ve been grateful for. I think there’s a good dialogue. They’ve been open and candid with me.” | Army Times >>

#VETSRISING
Marine vet Paul Mooney explains why he created the TV pilot “Vetted,” a comic story of being a veteran. | Task & Purpose >>

After coming back from Iraq, Noky applied to the Fashion Institute of Technology in New York, where she studied graphic design and advertising. The knowledge she gained from her bachelor’s degree helped Noky develop her own business, where she designs, prints, packages and mails the clothing all by herself. | A Plus >>

When military veteran Tyler Jeffries got the idea to propose to this girlfriend, he wanted to make sure he had some well-wishers to hand. Who better then, than two former presidents who were present as Mr Jeffries popped the question to Lauren Lilly. With ex-presidents George HW Bush and George W Bush looking on, thankfully Ms Lilly said “yes.” | The Independent >>

INSIDE WASHINGTON
The U.S. Department of Veterans Affairs can expand the group of veterans who are eligible for benefits due to Agent Orange exposure without making the change retroactive, a federal appeals court held Tuesday. | Reuters >>

Veterans Affairs officials in Pittsburgh failed to properly monitor three multimillion-dollar, no-bid contracts with a physicians group and paid multiple invoices for anesthesiology and cardiac surgery that could not be accounted for, a VA inspector general report shows. | Pittsburgh Tribune >>

At a press meeting in Anchorage Tuesday, U.S. Department of Veterans Affairs Secretary Robert McDonald admitted his agency had lost the trust of many veterans. McDonald — who was confirmed as VA secretary in July 2014 — also said that some of the recent changes made to the agency have hurt Alaska veterans. But McDonald promised the VA would do better. | Alaska Dispatch News >>