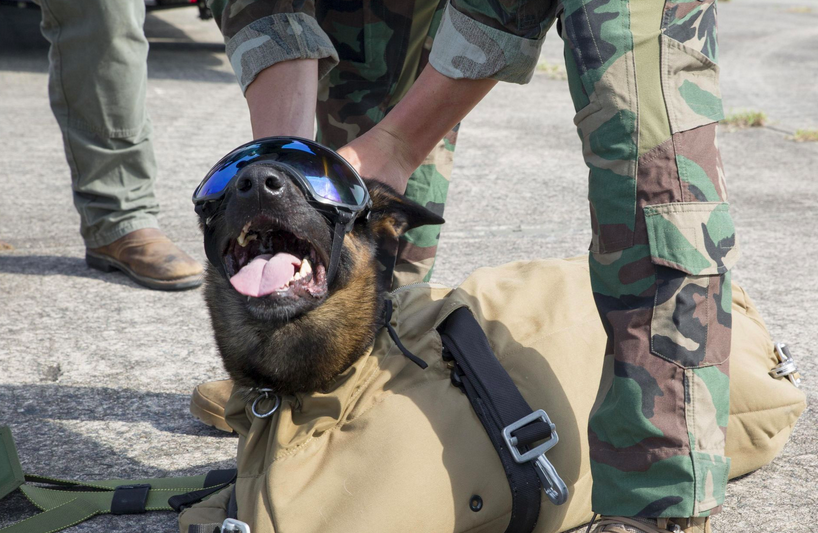 A Multi-Purpose Canine handler with Marine Corps Forces, Special Operations Command prepares his canine for a parachute jump over Marine Corps Base Camp Lejeune, N.C., on Sept. 10. As MARSOC continues to demonstrate their versatile capabilities, MPC handlers with the command are preparing their canines to maneuver in new areas of operation. | Military Times >>

David Petraeus apologizes again for affair, lays out vision for Iraq and Syria
David Petraeus, the retired Army general and former CIA director, apologized Wednesday before the Senate Armed Services Committee for his high-profile extramarital affair, and then proceeded to lay out his his vision for how the United States should handle the ongoing conflict in Iraq and Syria. | The Washington Post >>

VA pledges to scrutinize unaccredited schools getting GI Bill funds
The Department of Veterans Affairs has vowed to increase scrutiny of unaccredited schools that received federal funds through the GI Bill and to review state criteria that allow such schools to benefit financially from the country’s largest educational program for military veterans. | Reveal >>

‘Lean In’ Circles For US Military: Female Career Advancement Support Groups Allowed By Defense Department, Official Announces
The “Lean In” concept for women seeking career advancement in the corporate world found a place in the U.S. armed services this week. | International Business Times >>

Zakia Mohammadi, a woman in Afghanistan’s first national paragliding team, waited on a hilltop on the outskirts of Kabul for a wind to lift her craft into the sky, as dozens of watching teenagers clapped and cheered. | Reuters >>

Separate attacks in northern Afghanistan on Tuesday killed at least 15 Afghan troops, including 10 soldiers who died in an “insider attack” when a fellow soldier smuggled insurgents inside a checkpoint to kill his colleagues, officials said. | The Seattle Times >>

When two U.S.-made Humvees approached a checkpoint in Afghanistan’s Helmand province last month, the police assumed them to be friendly local or coalition forces. | Reuters >>

A car bomb killed at least 12 people and injured 42 others on Monday in Ameen, a Shiite district in eastern Baghdad, the police and medical sources said. | The New York Times >>

The booms come at regular intervals like incoming artillery. In the background is a heavy metal soundtrack pumped through an iPhone speaker. | The Daily Signal >>

A U.S. federal court dealt a setback to efforts by Iraq’s self-governing Kurds to sell Iraqi crude oil in the U.S., further complicating the Kurdish drive for financial independence from the central government in Baghdad. | Bloomberg Business >>

Military officials on Tuesday stepped up their rebuttal to the claim by some U.S. troops that an American policy encouraged them to overlook the rampant sexual abuse of young boys that is common in Afghanistan, particularly by men in the Afghan security forces. | Military Times >>

The brigade’s soldiers will collaborate with personnel from 18 countries to develop the capabilities of Iraqi security forces at 11 different sites across the country, as those forces fight the Islamic State. | Watertown Daily Times >>

U.S. military commanders have proposed a program to provide arms and ammunition to a coalition of up to 5,000 anti-ISIS Syrian rebels now operating in northern Syria. | CNN >>

Victoria Phillippi spent eight years in the Army, including two eventful tours in Iraq. She was on her first tour, January 2004 to January 2005, when on Dec. 21, 2004, a powerful explosion ripped through the mess tent at the Army base in Mosul, Iraq. | Ellwood City Ledger >>

In the car with her husband, Brian, her 8-month-old son, Dallas, and the family dog, Jake, Melissa Stockwell was heading from Chicago to Detroit on Aug. 14 to compete in the 2015 Detroit ITU Paratriathlon. | Pensacola News Journal >>

Now, with two U.S. Army infantry tours of Iraq and Afghanistan behind him, an admittedly more “grown up” Taggart is back behind the counter as owner of one of the area’s last family-run feed stores. | The Oregonian >>

A new comprehensive report on Veterans Affairs Department health care calls for a complete overhaul of the system, noting that without change, the department’s problems will continue and veterans will be denied the treatment they deserve. | Military Times >>

The Department of Veterans Affairs continues to retaliate against whistleblowers despite repeated pledges to stop punishing those who speak up, a national group said Tuesday. One called the department’s office of inspector general a “joke.” | Washington Post >>

Ill veterans and those whose family members died from diseases related to contaminated drinking water at Camp Lejeune are outraged by recent comments from Navy Secretary Ray Mabus in which he discounted a link between chronic disease and service at the North Carolina Marine Corps base from the mid-1950s to 1980s. | Marine Corps Times >>