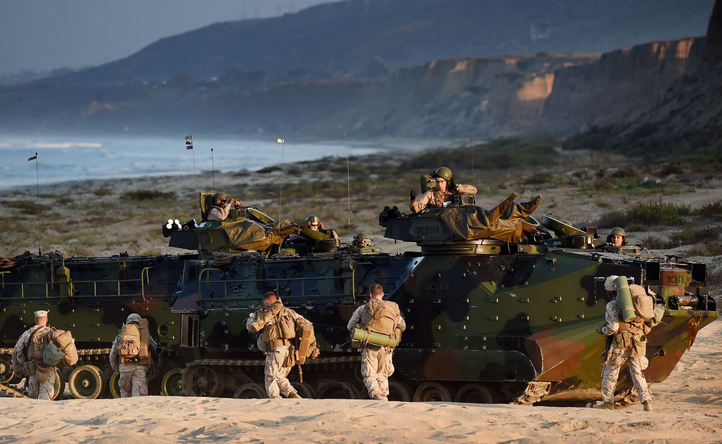 Marines take their positions during an amphibious landing operation with the Japan Maritime Self-Defense Force at the Dawn Blitz 2015 exercise in Camp Pendleton, Calif. | Military Times >>

Ceremony in Phoenix honors 9/11, War on Terror casualties
Surrounded by a seemingly endless, flat swath of gravel filled with the graves of veterans and their family members, an estimated 200 civilians, veterans and active military men and women on Friday morning honored the victims of the terrorist attack that shook the nation 14 years ago today. | The Arizona Republic >>

PTSD Insight: Could Low Heart Rate Variability Contribute To The Risk?
Heart rate variability is the variation in the interval of time between heartbeats, and it might play a role in the likelihood that a person could develop post traumatic stress disorder (PTSD) after exposure to traumatic events like natural disasters, serious accidents, and military combat. | The Inquisitr >>

The Taliban fired a series of missiles into a U.S. base in Afghanistan late Thursday but caused no injuries among the soldiers or personnel at the base, an Afghan official said. There was no immediate confirmation of the attack from Washington. | Associated Press >>

At first glance, the tastefully decorated rooms, embellished by dark wood floors and soft mood lighting, seem like an unlikely incubator of radicalism. The occupants of this space, in a glassy residential tower overlooking one of Kabul’s poshest neighborhoods, wield master’s degrees, not Kalashnikovs. | Washington Post >>

There is a growing belief within the US government that the Islamic State militant group is making and using crude chemical weapons in Iraq and Syria, a US official has told the BBC. The US has identified at least four occasions on both sides of the Iraq-Syria border where IS has used mustard agents, the official said. | BBC News >>

Iraq and Syria may have been permanently torn asunder by war and sectarian tensions, the head of the Defense Intelligence Agency said Thursday in a frank assessment that is at odds with Obama administration policy. | NBC >>

Iraq’s most influential Shi’ite Muslim cleric, Grand Ayatollah Ali al-Sistani, on Friday praised government reforms but said they should be sped up and warned against the process being derailed. | Reuters >>

U.S. military commanders around the globe need more eyes in the sky amid a proliferation of global threats, and the Army is moving to help fill that shortage. Although primarily a land force, the Army is planning to stand up new units this fall to expand its aerial exploitation battalions forces, which fly manned intelligence missions around the world. | The Hill >>

Hatch was shot in the leg looking for Berghdal, the American sergeant who was held by the Taliban for more than five years after U.S. authorities say he deserted his unit in 2009. Bergdahl was returned to the U.S. last year as part of a prisoner swap. Hatch shared the dramatic tale of the failed rescue mission with CNN’s Anderson Cooper on “AC360” Friday evening. | CNN >>

Chris Pratt fights the bad guys in the movies, but he has huge admiration for the heroes who do it in real life. That’s why today, fourteen years after the tragic terrorist attacks of Sept. 11, 2011, the Guardians of the Galaxy star made a point to thank a veteran, and he encouraged his fans to do the same. | E! Online >>

The eLine Military program, which launched in 2010, streamlines the capabilities and experience of military medics to accreditation applicable in the nursing field, cutting the course load significantly for their real-world military experience. | Corpus Christi Caller Times >>

Szczepanski has come a long way in the decade since, overcoming deep bouts of depression and anxiety, returning to school and founding his own nonprofit, through which he tours the country speaking about his faith and mental health. He and his wife, Alyssa, have two children — Elijah, 2, and Micah, 5 months. | M Live >>

The added $625 million in federal dollars is crucial for the unfinished veterans hospital. If Congress doesn’t agree to a funding boost by the end of September, prime contractor Kiewit-Turner is at risk of suspending work at the site because of a lack of cash — further delaying a project that is expected to cost at least $1.67 billion. For now, there is a general agreement between Congress and the administration on how to drum up money for the hospital. But an unrelated fight over abortion, government spending and Planned Parenthood could complicate the effort. | Denver Post >>

During a speech to the industry and government group ACT-IAC, VA’s Chief Veterans Experience Officer Tom Allin said the new portal — called Vets.gov — will aim to incorporate VA’s more than 1,000 websites into a centralized hub to streamline users’ access to the department’s various services. | iHealthBeat >>

The VA’s new PTSD brain bank and the Defense Department’s brain tissue repository at the Uniformed Services University of the Health Sciences are dedicated to studying neurological diseases common in troops and veterans, including concussion, amyotrophic lateral sclerosis, Parkinson’s and epilepsy, as well as psychiatric disorders. | Military Times >>