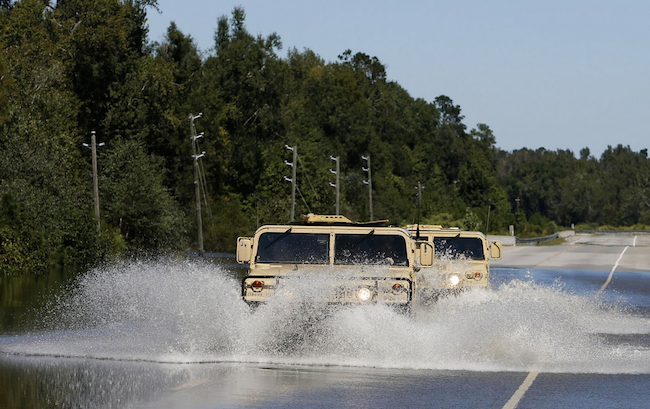 Wars the World Over Leave Many Fighting PTSD at Home and Abroad
The world is at war. Pockets of civil unrest from Syria to Afghanistan put soldiers and civilians in harm’s way. And for those who live through the trauma, many now battle with post-traumatic stress disorder, in which their past remains, in many ways, a part of the present. | U.S. News & World Report >>

Veterans health care study sparks partisan clash in Congress
Democrats and Republicans on the House Veterans Affairs Committee were divided Wednesday over the future of veterans health care as the panel heard testimony on a highly-critical study that suggested a complete overhaul of the VA medical system. | Las Vegas Review-Journal >>

Thirty-three people remain unaccounted for after a deadly weekend U.S. airstrike hit a Doctors Without Borders hospital in Kunduz, Afghanistan, the organization said Thursday. Missing are 24 staff members and nine patients who were in the hospital at the time of the blast early Saturday morning, Guilhem Molinie, the charity’s representative in Afghanistan, told reporters at a news conference in Kabul on Thursday. | USA Today >>

Defense Secretary Ashton Carter on Thursday asked NATO defense ministers for flexibility in their Afghanistan plans, saying that extending the U.S. military mission beyond 2016 is “very much the United States’ position.” | The Hill >>

A senior Democrat on the Housed Armed Services Committee on Thursday unleashed a harsh attack on the 14-year-long Afghanistan war, calling it a “failure” as Islamic extremists have simply set up shop in a list of other places to conduct terrorism. | Washington Times >>

Protesters hurled stones and scuffled with riot police in the second largest city in Iraq’s Kurdish north on Thursday, in the most intense show of discontent since an economic crisis hit the region. | Reuters >>

Twenty seven people were killed in Iraq on Thursday when mortars landed in the provincial capital of Baquba, police and medics said. It was not clear who fired the mortars at the northern town. | Reuters >>

Iraqi security forces have launched a operation to retake the city of Ramadi from ISIS militants and for the first time in months have taken control of part of the city, Iraqi and U.S. officials said. | NBC News >>

The authorized voluntary departure of dependents of military and civilian personnel assigned to Incirlik Air Base in Turkey has been extended for another 30 days, Air Force officials said Thursday. | Stars and Stripes >>

The Army must rely on more rotational forces as well as the National Guard and Army Reserve as it prepares to expand its training mission in Ukraine and continue reassuring its European allies in the face of Russian aggression. | Army Times >>

Farrar started a non-profit organization called 22 Needs a Face, referring to the estimated 22 veterans who commit suicide each day. He refined the name to something he thought resonated better with veterans: Platoon 22. Farrar served in the Army for nine years as a paratrooper and has dealt with various traumatic issues. | Southern Maryland Online >>

Luis Carlos Montalvan shared his recollections from serving in Iraq during a video advertisement for his New York Times bestselling memoir: “Until Tuesday: A Wounded Warrior and the Golden Retriever Who Saved Him”: | The Santa Clara Weekly >>

A secret restriction on internal Veterans Affairs FOIA policy within its Veterans Health Administration (VHA) prompted two veterans rights attorneys to push back this past Monday. The policy was leaked to the press and surfaced following blanket denial letters sent to NBC News reporters nationwide. The reporters are investigating a fraudulent scheme within VA where the agency used unqualified doctors to conduct brain injury examinations. | Disabled Veterans >>

Female veterans who try to take their own lives are often successful at a far higher rate than their female non-veteran counterparts because of one reason: They use guns. Female veterans die by suicide at nearly six times the rate as those with no service record, such an alarming number that mental health experts at the Department of Veterans Affairs say the agency is reaching out to former servicewomen to talk about gun safety. | Washington Post >>

VA Secretary Robert McDonald disputed an audit’s conclusions that his department needs a “systemwide reworking,” saying Wednesday that he’s already fixed many of the problems and what he really needs is a bigger budget and more flexibility to move that money around. | Washington Times >>