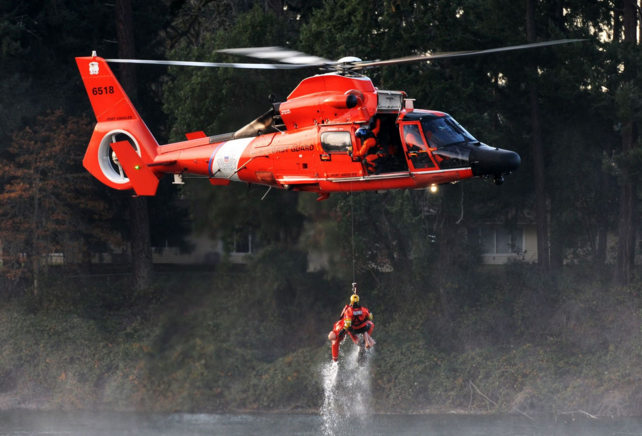 A Coast Guardsman is hoisted up during extraction training as part of the Disaster Management Exchange event on Joint Base Lewis-McChord, Wash. | Military Times >>

VA is buried in a backlog of never-ending veterans disability appeals
The appeals system does not have enough staff to handle the record number of veterans — from the wars in Afghanistan and Iraq as well as Vietnam — filing for disability payments over the last decade, then appealing when all or part of their claims are denied. But experts point to a more fundamental problem. Unlike U.S. civil courts, the appeals system has no mechanism to prevent endless challenges. | LA Times >>

Retirement changes mean tough choices for troops … eventually
In the coming days, President Obama will sign legislation putting in motion a massive military retirement overhaul that will affect the personal finances of hundreds of thousands of service members for decades to come. Just not right away. Defense officials still have dozens of details to work out with the new system, and the first individuals to feel the impact likely haven’t enlisted yet. | Military Times >>

New director appointed at Phoenix VA hospital
The Department of Veterans Affairs has named a new boss for its troubled Phoenix medical center, appointing social worker Deborah Amdur to a position that has been through a series of fill-in leaders for the past year. | The Arizona Republic >>

An Army Colonel who blew the whistle on a task force that was responsible for building a $43 million gas station in Afghanistan says he is being retaliated against, according to a prominent U.S. senator. | Washington Post >>

When Sakena Yacoobi ran 80 underground schools for 3,000 girls in Afghanistan under the Taliban, some teachers hid books in sacks of wheat and rice to avoid detection. “It is very hard to operate a school where the students cannot be seen,” says Yacoobi, who is known as Afghanistan’s “mother of education.” | National Post >>

The U.S. Geological Survey is reporting that a magnitude 5.9 earthquake has hit northeastern Afghanistan near the border with Pakistan and Tajikistan. There were no immediate reports of casualties. | New York Times >>

Iraq closed its northern airspace to all flights on Monday for at least two days due to military traffic from Russia’s air campaign in neighboring Syria. The closure was expected to affect domestic commercial routes to Erbil and Sulaimaniya as well as international flights from Turkey, Jordan, the Gulf and Austria. | Reuters >>

Islamic State militants captured a series of positions across Iraq’s Saladin province on Sunday following the second phase of an Iraqi military offensive that began in the province earlier this year. | UPI >>

In the wake of the Paris terror attacks – and amid continuing threats of violence in cities like Brussels – the 2016 presidential candidates have offered more details on their foreign policy plans in recent days. Here’s a roundup of how the candidates say they’d handle the threat from the Islamic State of Iraq and Syria (ISIS), from the military campaign overseas to protecting the homeland. | CBS News >>

As the KC-10 tanker hugs the North Carolina coast about 40 miles north of Cherry Point Naval Air Station, six EA-6B Prowlers from Marine Tactical Electronic Warfare Squadron 2 line up to take fuel. The tanker releases a long hose and a drogue refueling basket used for Navy and Marine Corps aircraft. The tanker cannot control the hose, so it is up to the Prowlers to make contact with the basket. | Military Times >>

American paratroops began training Ukrainian troops on Monday, an expansion of U.S. efforts to aid the eastern European country to protect its borders against Russian-backed rebels. | Stars and Stripes >>

Rep. Ryan Zinke explains his philosophy of government through the 13 military combat knives he keeps in his House office. They are all the blades issued to the freshman Republican from Montana over his 23 years as an officer with the Navy SEALs and a commander with Team 6. During that time, the special operators were searching for an ideal tool. | Stars and Stripes >>

Sgt. Andy Springer is a combat veteran. He said, now that he has made strides in dealing with his own post-traumatic stress disorder, he is working to help other veterans struggling after war. He leads Team Shenandoah for Active Heroes. Sunday they walked through Woodstock to raise awareness about the suicide rate among veterans. | KHSV >>

When William Reynolds’ son Malachi, 6, rode his bike for the first time this summer, the father of four ran at his side. And that would not have been possible the previous summer. Reynolds’ story, like the legend surrounding the 26.2-mile races called marathons – a messenger ran from the battlefield of Marathon to Athens to announce the defeat of the Persians in 490 B.C. – involves a war. | Philadelphia Inquirer >>

After years of concerns about the shrinking number of veterans on Capitol Hill, advocacy groups are redoubling their efforts to bring more to the nation’s capital next year. The networking coalition HillVets is planning its first “HillVets House” next summer to bring a contingent of would-be veterans policy staffers into congressional offices. | Military Times >>

A few years back, after the Veterans Affairs Department and DoD leaders announced they’d stop building a shared electronic health records system despite hundreds of millions of dollars in sunk costs, a seemingly exasperated Congress ordered the two departments to at least come up with a way to seamlessly share outpatient data between their existing systems and move on to modern health IT standards. DoD leaders attested last week that they’ve now done that and much more, even though it was a year later than Congress wanted. | Federal News Radio >>

The Department of Veterans Affairs is attempting to build a “culture of innovation” among its employees, beginning with hiring full-time “innovation specialists” for one year at eight pilot facilities. Last week, VA announced the “Innovators Network” — a broad initiative to get employees to contribute their own ideas about how to improve veteran services. | NextGov >>