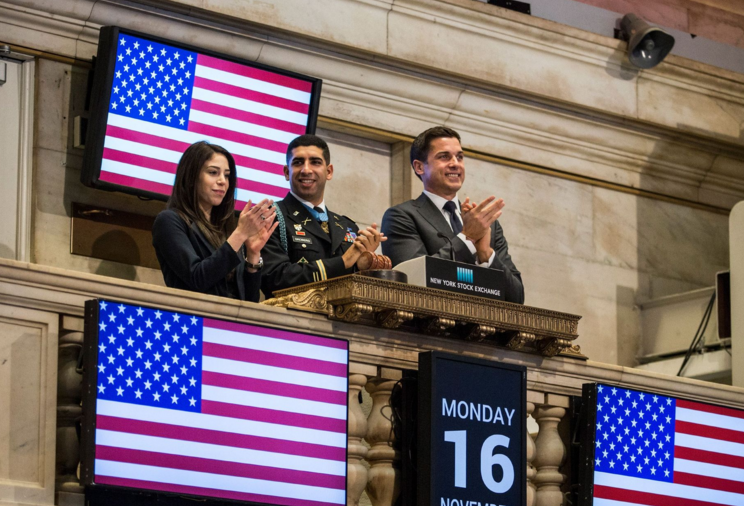 Army Capt. Florent Groberg, center, a recipient of the Medal of Honor, rings the opening bell at the New York Stock Exchange on Monday in New York City. Trading also was marked by a moment of silence before the opening bell for the victims of the terrorist attacks in Paris last week. | Military Times>>

U.S. and Russia entertain cooperation in Syria
In a striking shift, President Obama and Russian President Vladimir Putin are embarking on a tentative path toward closer ties and possible military cooperation, as the bitter rift over Ukraine gives way to common cause against the Islamic State group. | Military Times>>

Germany will send 130 more soldiers to Afghanistan, the government said on Wednesday after a cabinet meeting to discuss support for Afghan forces struggling to tackle an Islamist insurgency. | Yahoo News>>

Afghan refugees who have lived in Pakistan for decades are being driven out of the country in a wave of harassment by officials, with many facing arbitrary arrests and the destruction of what little property they own, Human Rights Watch has said. | The Guardian>>

Annual survey shows Afghans less optimistic about their country’s future than at any point during the past decade, shedding light on why so many flee to Europe. | The Guardian>>

A pair of former presidential national security advisers on Wednesday pushed lawmakers to increase airstrikes in Iraq and Syria with possible boosts in U.S. ground forces in the fight against the Islamic State group. | Military Times>>

The U.S. more than doubled its imports of oil from Iraq between August and September, according to a Platts analysis of U.S. Energy Information Administration statistics. | CNN Money>>

The US-led coalition against the Islamic State launched 29 airstrikes on targets in Syria and Iraq, the Combined Joint Task Force — Operation Inherent Resolve (CJTF-OIR) announced in a statement on Wednesday. | Sputnik News>>

The Marine Corps set a new distance record for Osprey flights on Tuesday as three MV-22Bs traveled from California to Brazil. | Military Times>>

Defense Secretary Ash Carter on Wednesday unveiled reforms to how the Pentagon recruits and retains the personnel he believes it must have to fight future wars. | USA Today>>

Report: Strain on sailors, fleet reaches tipping point
After years of surging deployments, the fleet is facing a looming threat: burnt-out warships and the ship crews needed to man them. | Navy Times>>

Three paintings by Paterson Navy veteran part of PCCC art exhibit
Back when he was a student at Paterson’s School 24, Inti Guarionex Rodriguez developed a love for art. He continued to paint and draw when he worked as a salesman after graduating from Rosa Parks high school. | NorthJersey.com>>

The former member of the 10th Mountain Division Light Infantry, Simpson was deployed four times — twice to Afghanistan and twice to Iraq. Multiple concussions and injuries forced Simpson off the frontline. As he recovered, he returned to basketball. | The Morning Sun>>

Before she delivered a keynote luncheon address Tuesday at the David L. Lawrence Convention Center, the head of the U.S. Small Business Administration popped in to Marty’s Market in the Strip District. | Pittsburg-Post Gazette>>

The VA on Wednesday finally embraced the Choice Card program Congress created in the wake of last year’s wait-time scandal, but said it will need some changes to clean up a convoluted bureaucracy and make the program sustainable for the long run. | Washington Times >>

More than four decades after the end of the Vietnam-era military draft, service members’ pay and benefits still have not caught up to the true needs of the all-volunteer force, members of a congressional military compensation commission lamented Wednesday. | Military Times>>