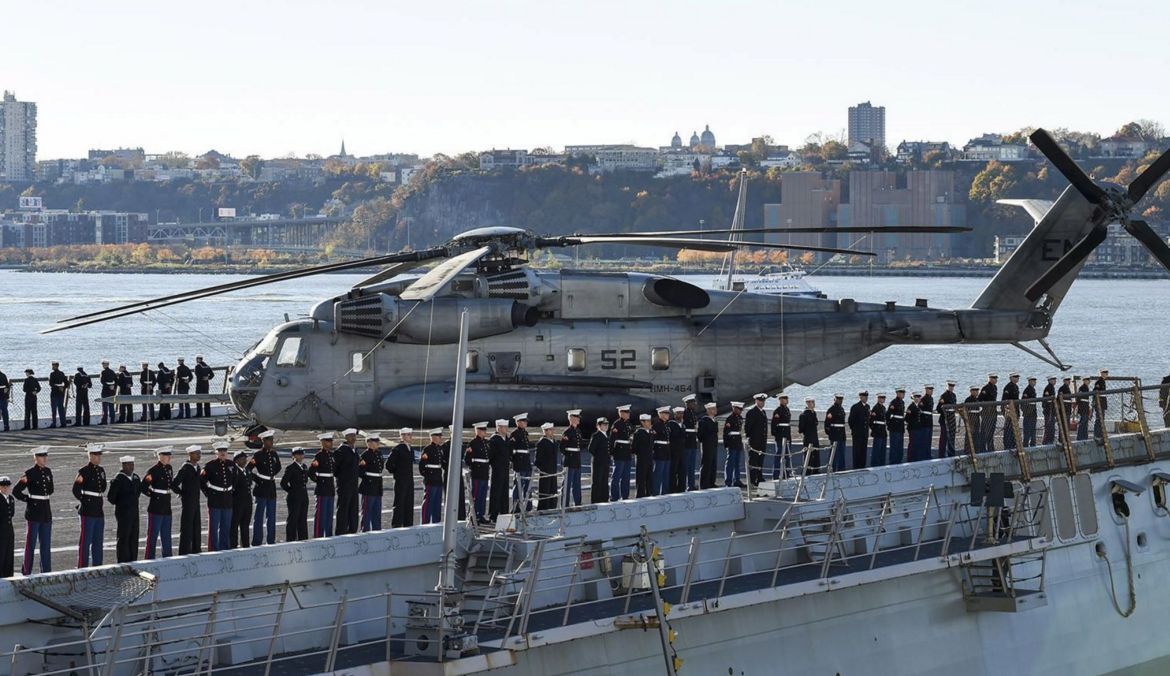 Sailors and Marines man the rails as the amphibious landing dock ship New York (LPD 21) pulls into port. New York is participating in Veterans Week New York City to honor the service of all our nation’s veterans. The ship conducted training certification during its transit from its homeport in Mayport, Fla. | Military Times >>

White House announces In-State tuition for veterans, families
All recent U.S. military veterans and their families will now be able to pay in-state tuition rates at public colleges and universities throughout the country, regardless of how long they have lived in-state, the White House announced on Wednesday in honor of Veterans Day. | Washington Times >>

Homeless veterans number decreased only slightly last year
Governmentwide efforts to help homeless veterans pulled about 2,000 individuals off the streets from 2014 to 2015, according to new estimates released this week by the Department of Housing and Urban Development. | Military Times >>

Technicality keeps thousands of post-9/11 vets from VA benefits
Nearly 30,000 post-9/11 combat veterans – some of whom have been waiting for years – are still without Department of Veterans Affairs health benefits due to a technicality more than three months after a whistleblower brought the issue to light. | Stars and Stripes >>

A suicide bomber targeted a convoy of foreign forces just outside the city of Lashkar Gah in the volatile southern Afghan province of Helmand, killing one civilian and wounding 12 others, local officials said on Sunday. | Reuters >>

The Kurdish Regional Government on Saturday said it thwarted an Islamic State terror attack in Erbil this month, as Iraqi officials said Friday’s Islamic State-claimed attacks proved that inaction in Iraq had implications beyond the Middle East. | Wall Street Journal >>

Kurdish forces backed by U.S. air strikes seized the northern Iraqi town of Sinjar from Islamic State on Friday, a Reuters witness said, in one of the most significant counter-attacks since the militants swept through the north last year. | Reuters >>

An amateur photographer thought the world was ending when she caught pictures of a Trident missile in action near Los Angeles. The series of pictures captured by Porter Tinsley, who posted them on her blog Less Than Amateur, show a white halo backdropped by the Milky Way. She took the pictures while standing on Bombay Beach, two and a half hours away from L.A., on Saturday (Nov. 7) during one of two Trident missile tests over the weekend. | Space.com >>

On Saturday, Army football took the field for its game against Tulane with a powerful and solemn display. West Point junior Caleb McNeill carried the French flag alongside the American flag as the team entered. | ESPN >>

U.S. Air Forces in Europe is urging airmen and their families to remain vigilant and to report any suspicious activity to the proper authorities” following Friday’s attacks in Paris, in which militants reportedly tied to the Islamic State killed more than 120 people, said Maj Sheryll Klinkel a USAFE spokeswoman. | Military Times >>

“One pedal in front of the other,” the hurt is falling away. Sharika Blockett is feeling stronger and more self-confident as she rides with fellow female veterans up the side of a steep hill southeast of Pine Flat Reservoir. | Fresno Bee >>

When veterans return home from active duty, it can take time to get adjusted to civilian life and endure the side effects of combat, like post traumatic stress disorder (PTSD). One way a veteran can deal with the effects of PTSD is by having a service dogs. | KMOV >>

Now a case worker for the Reno-based Northern Nevada Veterans Resource Center, Whitecloud’s job and his passion is to help homeless veterans. In one of his part-time jobs, that of a professional musician and lead singer in the southern rock band Seasons of Insanity, the passion to help veterans carries over. | Associated Press >>

Very few veterans are using benefits added to the GI Bill in 2011 that offer living stipends to nonstudents who seek on-the-job training or apprenticeships, according to a new government report. Only about 27,000 veterans, or about 2 percent of those who have received Post-9/11 GI Bill benefits since 2011, have tapped the offer that provides a full or partial housing allowance to working veterans, according to the report by the Government Accountability Office. | Military Times >>

Sen. Kirsten E. Gillibrand on Tuesday renewed her push for legislation that aims to clear the military records of upwards of 100,000 U.S. veterans who were dismissed from the services just because they are gay. | Watertown Daily News >>

President Obama is marking the week of Veterans Day by noting his administration’s work on veterans’ employment, healthcare and homelessness. In his weekly address, Obama said his administration has worked to increase the Veterans Affairs Department’s budget, expand benefits for veterans and reduce the backlog of veterans’ medical care claims by nearly 90 percent. | The Hill >>