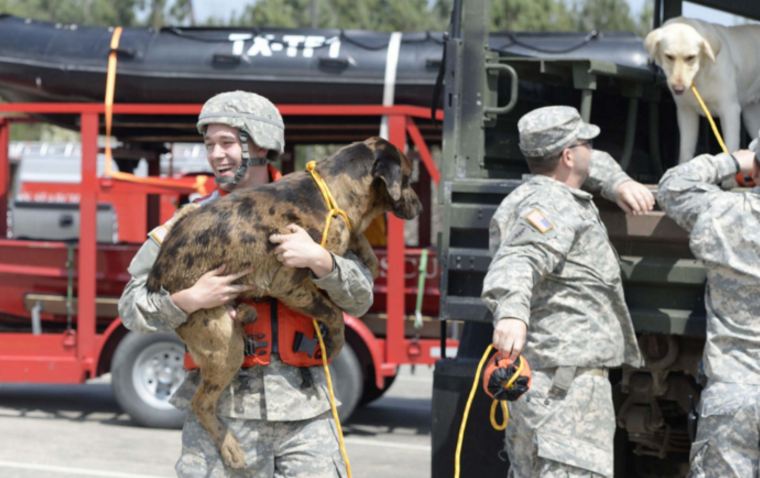 The vast divide between America and its military
For too many Americans in 2016, war isn’t a dire act turned to once all other options have been exhausted. It’s a narcotic, a quick fix, something that happens in strange, faraway lands, where other people’s sons and daughters do violent things for country. | CBS News >>

Facebook may help stop your friend killing himself
In 2015, the Defense Personnel and Security Research Center, working with researchers from Northrop Grumman and the University of Utah National Center for Veterans Studies, undertook two studies on suicide cues in social network posts. Social media’s role in contributing to or preventing suicide has not been well studied, despite reports of deaths linked to cyber bullying, suicide clusters among online friends and numerous saves, experts say. | Military Times >>

PTSD Patients Who Have Nightmares Are More Likely To Experience Suicidal Thoughts, Tendencies
Almost everyone has experienced the terrifying sensations elicited by a bad dream. Nightmares, though they may seem relatively harmless to some, might actually be quite insidious for others. A new study published in the Journal of Clinical Sleep Medicine suggests a significant link between nightmares and suicidal behavior. It’s the first research, its authors say, to prove this association is “mediated by a multistep pathway via defeat, entrapment, and hopelessness.” | Medical Daily >>

The United States has significantly intensified its bombing campaign in Afghanistan in the past two months as part of President Obama’s widening war against the Islamic State militants who have seized territory outside of Iraq and Syria, according to senior military commanders. | New York Times >>

The U.S. military says one of its helicopters crashed in southern Afghanistan, adding that the cause was unknown and there were no casualties. In a statement, U.S. Army Col. Michael Lawhorn said Friday the helicopter made a “hard landing” in Helmand, but gave no details on timing or location. | AP >>

The Defense Department has disciplined at least a dozen military personnel for their roles in an airstrike in October on a Doctors Without Borders hospital in Afghanistan that killed 42 people, senior military officials said, but they are not expected to face criminal charges. | New York Times >>

The Marine killed in an ISIS rocket attack in Iraq on Saturday was at the first American firebase that had only become operational a few days earlier CNN has learned. The existence of the firebase had not been made public. The Pentagon had planned to acknowledge the firebase this week, a defense official tells CNN. | CNN >>

After months of losing ground in Iraq and Syria, the Islamic State group is showing signs of wear and tear, and its opponents say they have seen an increase in desertions among the extremists. But the jihadis appear to be lashing back with more terrorist and chemical attacks. | AP >>

Iraqi forces have launched a broad offensive to retake the city of Hit from the Islamic State group in the western province of Anbar, a top commander said Saturday. | AFP >>

It’s no job for the fainthearted. As the next head of U.S. Central Command, Army Gen. Joseph Votel, whom the Senate confirmed late Thursday, will assume oversight of the most vexing military problems in the world today. | Military Times >>

Meet Tequila, my best buddy while I served in the Marines in Afghanistan. Tequila was my bomb dog. She had the best nose out of all the bomb dogs she served with. In 2010, I was sent to dog handling school outside Fort Bragg, North Carolina, with 12 other grunts from 3rd Battalion, 3rd Marines. | Marine Corps Times >>

Two U.S. Navy submarines have arrived in the Arctic for regular exercises intended to train crews how to operate in extreme, frigid conditions. | AP >>

Chris Nolte suffered a back injury while serving in Iraq in 2003. The injury prevented him from riding a regular bike when he returned to the U.S., so he began riding electric bikes. Then in 2011 he opened Propel Bikes, a bike shop in Brooklyn, to share his love of electric bikes with others. Watch the video above to hear his triumphant story. | Mashable >>

The 19-acre parcel of irrigated land halfway between Redmond and Bend is staffed by 20 volunteers — the majority veterans — who tend the grounds. Several greenhouses, a large barn and a pasture for the herd of endangered Navajo-Churro sheep are among the amenities. | Bend Bulletin >>

Roberts, a photographer and filmmaker, decided to do something constructive in his friends’ memories. He has co-written and hopes to direct a Maine-based indie film called “Those We Leave Behind.” It’s a drama focusing on the story of an Army veteran who takes his own life, and the emotional havoc it wreaks on his wife and daughter. | Portland Press Herald >>

By August, many more thousands of Vietnam War veterans, those suffering from bladder cancer, hypothyroidism, Parkinson’s-like symptoms and even high blood pressure, could learn they will be eligible for VA health benefits and disability compensation. Or perhaps not. | Colorado Springs Gazette >>

A recent scathing review conducted by the U.S. Department of Education Inspector General has found that some military service members may in fact have been overcharged on student loan interest rates after all. That’s an alarming reminder of just how difficult it can be for those who have served our country to navigate the very benefits put in place to make their higher education more affordable. | The Hill >>

The Veterans Affairs Department is counting on an agile development framework to aid in needed IT improvements, according to CIO LaVerne Council. The framework is called the Veteran-focused Integration Process, or VIP, and Council cited it as one of the significant measures VA is implementing to improve its Federal IT Acquisition Reform Act grade, a C in November 2015. | Federal Times >>