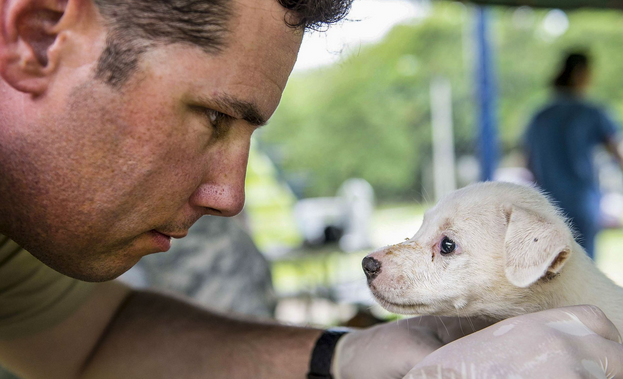 Survey: Women struggle to be seen as ‘real’ veterans
Women already facing discrimination issues in the ranks confront similar challenges being accepted as “real veterans” in their post-military life, according to a new study released by officials at The Mission Continues on Monday. | Military Times >>

Extremists fighting for the Islamic State’s fledgling outpost in Afghanistan have brutally beheaded at least 10 Taliban members, as the bloody rivalry between the two Islamic terror groups intensifies. The attack took place in a remote area in the eastern province of Nangarhar after ISIS jihadis intercepted at least a dozen Taliban fighters who were fleeing a gun battle with government troops. | Daily Mail >>

When she first started riding her Chinese-made bicycle through the streets of this central Afghan town three years ago, university student Zahra Hussaini was so careful to not draw attention to herself that she donned men’s athletic clothes. | LA Times >>

The conflict in Afghanistan is resulting in thousands of people being killed or wounded, forcing families to leave their homes and seek refuge in neighbouring communities, according to Mark Bowden, the UN Secretary-General’s Deputy Special Representative in the country. | UN News Centre >>

One year after the Islamic State stormed out of eastern Syria to take control of Mosul, Iraq’s second largest city, last June 10, it remains a formidable force, with few signs that a U.S.-led bombing campaign has significantly blunted its abilities or ambitions. | McClatchy DC >>

Iraq is committing 27,000 security personnel to protecting its oil and energy industry from the advance of Islamic State (also known as ISIS). The Telegraph reports that Iraq’s oil minister Adel Abdel Mahdi outlined plans for the new oil army at the Organisation of the Petroleum Exporting Countries (Opec) meeting in Vienna over the weekend. | Business Insider >>

The two design contracts awarded by the US Army for the Future Fighting Vehicle (FFV) could yield a Bradley replacement or technology spinouts to upgrade the Bradley. BAE Systems Land and Armaments and General Dynamics Land Systems won the contracts, of more than $28 million each. The work is due Nov. 28, 2016. | Defense News >>

Scientists proved years ago that toddlers who could wait longer than their peers to eat a promised reward of marshmallows were more likely to grow into more successful and better-adjusted adults. Now, the Marines may be looking to adapt “marshmallow test” science to help screen for more resilient and determined officer candidates. | Marine Corps Times >>

The first sailors are now on station at the controversial missile defense shield in Romania, Navy Region Europe announced Monday. The sailors arrived last month as part of an initial wave that will “lay the groundwork for a full team deployment.” | Navy Times >>

Brandy Horchak-Jevsjukova and her husband, Vitalijs Jevsjukovs, hope to shine some light into dark corners with the launch of the Will of the Warrior program for disabled veterans and first responders. The couple, military veterans who met on the battlefield more than 10 years ago, announced the program during the grand opening of their new boxing gym, Warriors’ Call Boxing, in Harmony Township on May 30. | Washington Times >>

During the Veteran Women Igniting the Spirit of Entrepreneurship event in Washington, D.C., on May 30, veteran and military-spouse entrepreneurs gathered to workshop ideas, network and participate in break-out discussion sections. | Task & Purpose >>

A new photo exhibit focuses on those living with Post Traumatic Stress Disorder, brain injuries, and companion dogs. It’s opening at a Phoenix art gallery and was put together by two former service members. | KSAZ Fox >>

John McHugh, secretary of the U.S. Army, will step down by November, the Defense Department said Monday, adding to a growing list of senior military personnel who are departing the Pentagon during President Obama’s final period in office. | Washington Post >>

According to a recent press release, Rep. Steve Israel (D-New York) and Rep. Tim Murphy (R-Pennsylvania) have introduced bipartisan legislation to help improve efforts to end homelessness among our nation’s veterans. The Homeless Veterans Assistance Fund Act of 2015 or H.R. 2591, creates the Homeless Veterans Assistance Fund, according to the release. If this legislation is passed, taxpayers will have a chance to help keep nearly 50,000 veterans off the streets by making an optional contribution to the fund on their federal income tax return form. | The MReport >>