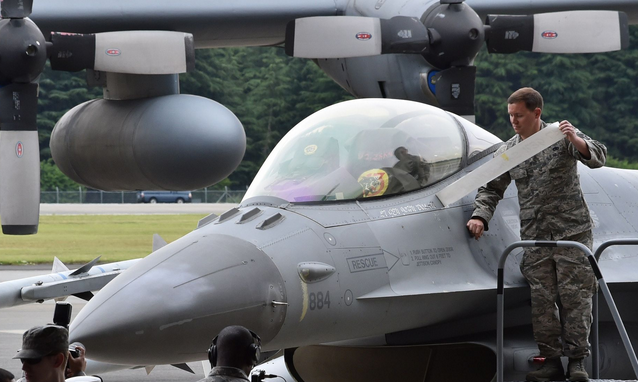 An airman unveils the name of the new commander written on an F-16 fighter aircraft during a change of command ceremony at US Yokota Air Base in Tokyo. | Military Times >>

June 6, 1944, D-Day marked with ceremonies and personal remembrances
The 71st anniversary of World War II’s D-Day invasion was remembered Saturday at a cemetery in France overlooking Omaha Beach and, closer to home, by U.S. vets who bore witness to the horrors of “The Longest Day.” | Fox News >>

Veterans Affairs: Promises and hospital plans handed out
The Department of Veterans Affairs on Friday handed out promises of reform along with its latest plan to finish its Aurora medical center. The VA outlined steps it is taking to rein in a sprawling and often confusing bureaucracy. It currently has more than a thousand websites, nearly a thousand 800 numbers and 21 geographical service networks. | The Denver Post >>

There are not many places in the world where journalists – not to mention government officials – might still rely on passing shepherds to bring them reports of political significance. But that is how one of the early descriptions of an Islamic State training base in western Afghanistan first surfaced back in January. | New York Times >>

A group of Afghan women has held unprecedented talks with the Taliban in the Norwegian capital, Oslo. The women say they focused on the need to protect their rights in any future power-sharing deal. One delegate described the talks as “historic”. | BBC News >>

Hundreds of Taliban fighters overwhelmed a remote district in northeastern Afghanistan on Saturday in an area where the government’s influence has waned considerably over the past two years, provincial officials said. | New York Times >>

The United Kingdom will send an additional 125 military trainers to Iraq to counter the rising threat from the Islamic State, Prime Minister David Cameron said Sunday at the G-7 summit. | USA Today >>

Sgt. Abbas Adwani is helping to train a brigade of fellow soldiers for what promises to be one of the hardest battles yet against Islamic State: an offensive on the city of Mosul—the extremist group’s stronghold in Iraq. | Wall Street Journal >>

Tariq Aziz, a top minister for Saddam Hussein who served as Iraq’s international spokesman for more than 20 years and was perhaps the government’s most recognizable figure after the longtime dictator, died June 5 at a hospital in the southern Iraqi city of Nasiriyah. He was 79. | Washington Post >>

The U.S. Air Force announced Thursday that it is making it a little easier for transgender airmen to stay in their posts, despite the military’s ban on them serving openly. The new policy raises the level of authority necessary to discharge someone for being transgender. | Huffington Post >>

The Navy plans to pull its carrier presence out of the Middle East temporarily this fall, which will sideline the Navy’s premier airstrike platform for the first time since the outbreak of Operation Inherent Resolve. | Navy Times >>

At least 30,000 U.S. troops needed medical treatment after improvised explosive device, or IED, blasts. A new study suggests thousands more could have an unseen injury from those explosions. Veterans Affairs researchers found troops who felt nothing from nearby exploding IEDs are now dealing with premature aging of the brain. They’re losing memory, planning, and function skills generally seen with the elderly. | Fox 30 Jax >>

How to get “micro” farm loans and helping veterans returning to civilian life to become farmers were among the topics members of Farmer Veteran Coalition and federal agriculture officials talked about this week in Washington, D.C. | The Topeka Capital-Journal >>

It’s a different take on therapy. A local center out of Warsaw is using horses to help veterans dealing with post traumatic stress disorder. A few minutes on one of these horses is a major stress reliever. | ABC 57 >>

Congressional efforts to significantly cut workplace protections for Department of Veterans Affairs (VA) employees — with clear implications for the rest of the federal workforce — are moving apace even as the largest federal union mounts a vigorous attack on the legislation. | Washington Post >>

Moulton’s package of bills seeks to improve the quality of VA hospitals through stronger recruitment efforts, training scholarships, and the expansion of a student loan repayment program for health care workers. Any changes would take funding from existing programs. | Boston Globe >>

It took more than 30 years for a select group of female pilots, America’s first female military fliers called the WASP, to gain recognition and veterans’ benefits following their service in World War II. While much has changed since the Women Air Force Service Pilots gained benefits in the late 1970s, with programs and services mounting for female vets, many women who served remain on the outside when it comes to care through the Department of Veterans Affairs. | The Messenger Post >>