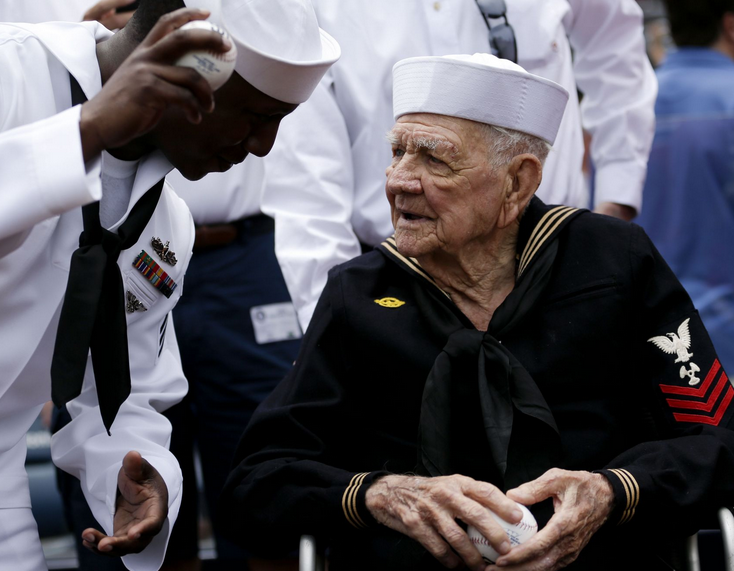 VA deputy: Accountability push is making a difference
The Veterans Affairs Department’s top deputy is confident that his months of accountability efforts are helping to clean up operations throughout the agency, even if firings have been fewer than what most outsiders have wanted. | Military Times >>

VA will extend benefits to all same-sex couples
The Department of Veterans Affairs said Monday that same-sex couples in states across the country will now have access to a raft of denied benefits following the Supreme Court’s landmark marriage equality decision. | Stars and Stripes >>

Urgent care, mental health in defense bills
House and Senate lawmakers hashing out a compromise on their respective defense policy bills will mull over several military health provisions as they finalize the legislation. Discrepancies to be addressed include access to urgent care and other medical appointments, mental health services for troops, family members and veterans, pharmacy fees and birth control. | Military Times >>

U.S. forces conducted a raid to destroy a cache of weapons north of Kabul early Monday, a U.S. army spokesman said, giving rare details of unilateral activity in Afghanistan. Afghan residents took to the streets in Parwan province in protest. Solo U.S. operations are legal under a bilateral security agreement the two nations signed last year, but the document specifies they occur only in exceptional circumstances. | NBC News >>

How history will remember America’s longest war will be shaped by public debates over the United States’ failures and successes and visible consequences such as the collapse of the Taliban regime and the death of Osama bin Laden. But the U.S. engagement has also affected urban Afghan society in indirect ways, seeping into its culture, language and attitudes. | Washington Post >>

Afghanistan and the United Nations have reached agreement to transfer to Kabul’s control a controversial multi-billion dollar fund intended to rebuild the police force and pay officers, the U.N. Development Programme (UNDP) said on Monday. The deal transferring the fund over 18 months and to be signed by both parties on Tuesday is a breakthrough after months of negotiations over how rapidly it should pass to Afghan control. | Reuters >>

The director of National Museum of Iraq has revealed that he wept after learning that ISIS had destroyed relics chronicling his country’s history. “They’re just statues,” Haider Oraibi told NBC News. “But for us, they’re living things. We came from them, we are part of them. That is our culture and our belief.” | NBC News >>

Areas of marshlands in the Al-Chibayish district of Dhi Qar Province are once again being deliberately dried out, according to pan-Arab daily Asharq Alawsat. But while in the 1990s, Saddam was responsible for creating an environmental disaster in the marshes, the culprit this time is Islamic State (IS), which has cut off water supplies to the area after capturing dams along the Euphrates River to the north. | Business Insider >>

Officials say attacks inside and around Baghdad have killed at least seven people. A police officer says drive-by shooters killed a pro-government Sunni tribal sheikh along with his three guards in the town of Tarmiyah, 50 kilometers (30 miles) north of Baghdad. | Associated Press >>

He is not the Most Interesting Man in the World. But with 42 years in uniform, 59-year-old Michael Jarnevic is likely the saltiest sergeant major serving in the U.S. military. And when he retires July 8, he’ll likely be the last person in uniform whose service record includes a tour during the Vietnam War. | Army Times >>

A key step toward possibly opening the Air Force’s last male-only combat jobs to women concluded June 19. That day, the Air Force’s Air Education and Training Command finished testing 175 male and female volunteers over two months at Joint Base San Antonio-Lackland on the kind of physical challenges they would face on the battlefield, said Neal Baumgartner, exercise physiology and fitness consultant to the Air Force and AETC’s program director for fitness. | Air Force Times >>

Black socks with the PT uniform. Headphones with your uniform while in the gym. You asked for these changes to AR 670-1, and Sergeant Major of the Army Dan Dailey is looking to make them reality. | Army Times >>

A Purple Heart recipient who served 11 years in the U.S. Marines and Army says he was denied a ride on a New Jersey public bus over his service dog. Daniel Wright, who suffers from post-traumatic stress disorder, said he doesn’t go anywhere without his pit bull, Tank. | Washington Times >>

As dawn stretched its fingers over the Atlantic Ocean and onto the St. Augustine pier, seven veterans trekked over the sand toward the waiting waves. The men, some officers, others enlisted personnel, are all part of a newly formed group called the Florida Military Surf Club. Most are Iraq and Afghanistan veterans and some used to be active-duty before coming to the organization they now all call home: the Florida National Guard. | The Florida Times-Union >>

A ribbon was cut today for a new, center-city-based innovation center that will act as a national incubator for veteran-led businesses. Located inside of Benjamin’s Desk , a coworking space at 17th and Walnut Streets, The Bunker Philadelphia will provide support to new tech companies run by veterans. | CBS Philly >>

The VA has ordered helicopter training schools in Arizona, Florida, Texas, and Washington to stop enrolling new Veteran students after it has come to light that they are charging Veterans using the Post-9/11 GI Bill up to $150,000 to complete the rotary wing qualification program. | Military.com >>

MyHealtheVet is poised to undergo a major redesign that will expand core features and further improve the way veterans access their personal health records and interact with healthcare providers. | Federal Times >>