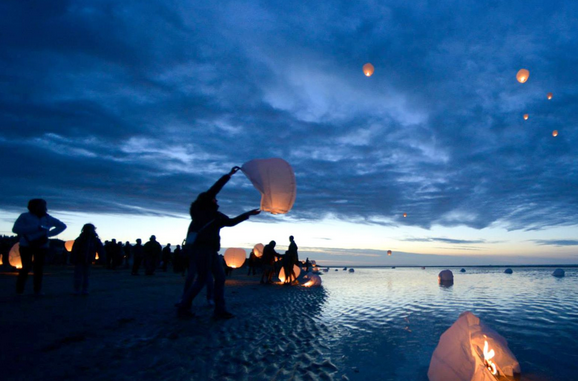 Local residents of the Normandy, France, region release paper sky lanterns Friday to commemorate those who died there on D-Day, at a place the Allied Forces named Utah Beach for the invasion of an occupied France 71 years ago. | Military Times >>

Veterans on campaign to help women
As special guest for the “Celebration of Life” dinner and program to honor area veterans Monday night at the Center for Visual and Performing Arts in Munster, Lynch, along with the keynote speaker Dr. Irene Trowell-Harris, hope to bring more attention to the plight of female veterans. | Chicago Tribune >>

Key lawmaker: Retirement reform on track
The chairman of the House Armed Services committee expects only “fine tuning” to military retirement reform overhaul proposals under consideration on Capitol Hill, not an entirely new plan or a halt to the effort. | Military Times >>

Thousands of people are being killed and wounded, and thousands of families have had to leave their homes and seek refuge elsewhere this year because of the conflict in Afghanistan, said Mark Bowden, the United Nations (U.N.) Secretary-General’s Deputy Special Representative in the country (TOLO, UN). | Foreign Policy >>

In Afghanistan, 13 women and girls are preparing for an unprecedented climb up their country’s highest mountain. Over the past two months, they’ve become leaner, stronger and more committed to making the ascent. | NPR >>

Islamic State militants staged attacks near Baghdad and the Libyan city of Surt on Tuesday, underscoring the group’s persistent strength on both fronts despite a monthslong American-led air campaign against it in Syria and Iraq. | New York Times >>

U.S. President Barack Obama is weighing expanding the number of training sites for Iraqi forces as a way to bolster the battle against Islamic State, the top U.S. military officer said on Tuesday, a move that could mean deploying more U.S. forces. | Reuters >>

Iraq’s history is writ large among the ruins of Habbaniyah military base: wrecked aircraft, crumbling buildings and much-used military hardware all telling a part of the country’s troubled tale. | CNN >>

The Army took down its homepage Monday after the site was hacked, the Army confirmed, with a group loyal to the Syrian government claiming responsibility. | Army Times >>

The economy is on an uptick, so the Navy must work harder to compete with the private sector to bring in new sailors and keep them when their service obligations end. The Defense Department’s personnel system, more than half a century old, is ripe for overhaul in this effort, as is the Navy’s inflexible bonus system, Chief of Naval Personnel Vice Adm. Bill Moran said in meeting with Washington reporters Tuesday. | Navy Times >>

The American Medical Association on Monday said there is no valid medical reason to ban transgender persons from serving in the U.S. military. The powerful physicians group, with nearly 220,000 members, voted on a resolution saying not only should transgender people be allowed to serve, they should be provided health services at the same medical standards that apply to nontransgender personnel. | Military Times >>

“It was pretty run down,” Arturo Aguirre said of his home in Raymondville. “It needed a lot of work.” So a group of veterans is working to repair the 26-foot by 24-foot house on East Gem Avenue, where Aguirre keeps his son’s portraits. | The Monitor >>

Although the Missouri Patriot Paws organization has been pairing service dogs with Missouri military veterans for about a year, a special event took place Friday, May 29, at Veterans Memorial Park in Rolla. | The Rolla Daily News >>

Wounded veterans on a 2,000-mile journey were welcomed to Roanoke on Monday. Participants in the 2015 Road Warrior Ride received a police escort through the city before being greeted by local veterans and civilians as rain poured down at the American Red Cross Blood Donation Center. | Roanoke Times >>

Army Secretary John McHugh plans to leave his post as the service’s top civilian by November, according to an email sent Monday to Army Times by the Army’s chief of public affairs. | Army Times >>

Hudson, 52, now has a home, a job and a future — all because of an effort launched more than a decade ago to convert an underused building on the West Los Angeles Veterans Affairs campus into residences for chronically homeless veterans in need of medical or mental health treatment. | LA Times >>

Some veterans advocates have accused the for-profit education industry of aggressively targeting veterans because of their federal GI Bill money. Critics say the schools are too expensive and a waste of money not just for students, but for taxpayers who fund the GI Bill and other loan and grant dollars used by a large chunk of students to help pay to attend for-profit colleges. | Associated Press >>