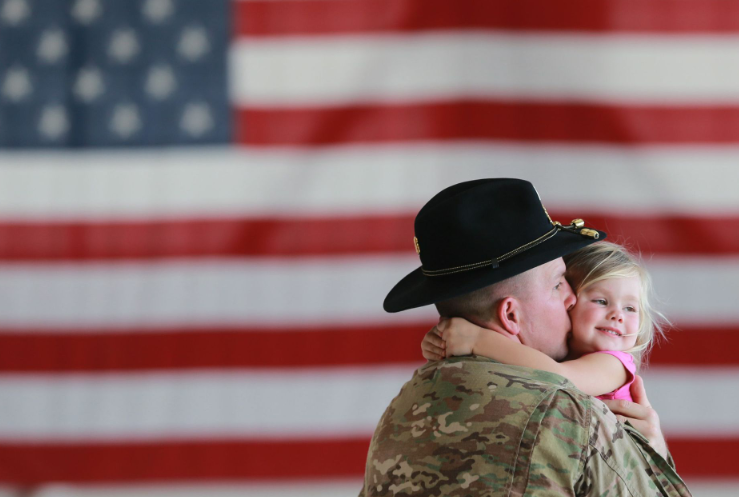 Army 1st Lt. Derek Phillips kisses his daughter, Leah Phillips, 2, as she gives him a hug at the conclusion of a casing of the squadron colors ceremony at Fort Bliss’ Biggs Army Airfield in El Paso, Texas. | Military Affairs >>

PTSD veteran: I’m not crazy
According to a Department of Veterans Affairs study, 80% of veterans diagnosed with PTSD are given psychiatric drugs. Of them, 89% are given anti-depressants. And, according to ongoing research conducted by New York University psychiatrist Dr. Charles Marmar — funded, in part, by the Department of Defense — troops are given these drugs despite estimates that only 20% of veterans suffering from PTSD are treated “effectively.” | CNN >>

House faced with VA budget fix or no health care services
House lawmakers said Wednesday they felt forced to fill a $3 billion budget hole at the Department of Veterans Affairs that could halt outside health care treatment at the end of the month and shutter hospitals and clinics after Aug. 20. | Stars and Stripes >>

A suicide bomber attacked a market crowded with shoppers Wednesday in northern Afghanistan, killing at least 19 people and wounding 38 amid other Taliban assaults in the area, authorities said. | Associated Press >>

Trudging halfway up a jagged goat trail, guide Mohammad Ibrahim extolled the panoramic view — a vast, ancient landscape of russet-hued cliffs that is on the frontline of Afghan efforts to jumpstart warzone tourism. | AFP >>

Afghanistan has banned the sale of imitation Kalashnikovs and other fake guns after the toys caused injuries to more than 100 people during Eid al-Fitr celebrations. | The Guardian >>

Iraqi security forces and Sunni tribal fighters launched an offensive on Tuesday to dislodge Islamic State militants and secure a supply route in Anbar province, police and tribal sources said. In other action, bomb attacks across the country killed at least 32 people. | Reuters >>

With Iraq facing “one of the most difficult phases in its modern history,” the Government, its leadership and, most of all, Iraqis themselves, will need “continuous and massive” support and assistance from the international community, the top United Nations official in the country told the Security Council today. | UN News Centre >>

One by one, the cities around this Iraqi town have fallen. Fallujah. Ramadi. The walled community of Hit. Islamic State fighters have slaughtered thousands of people as they have tightened their grip on Iraq’s western province of Anbar. But Haditha has remained an outpost of resistance. | Washington Post >>

A Navy officer and a Marine fired their sidearms hoping to kill or subdue the gunman who murdered five service members last week in Chattanooga, Tennessee, according to multiple military officials familiar with internal reporting on the tragedy. | Navy Times >>

Marine second lieutenants have done progressively worse on a standardized test administered at The Basic School over the last 35 years, a new report finds — but Corps officials say this doesn’t mean the quality of its leaders is any lower. | Marine Corps Times >>

The secretary of the U.S. Air Force says her visit to Fargo was meant to update members of the North Dakota Air National Guard base on her priorities. Secretary Deborah Lee James met Tuesday with members of the 119th Wing, as well as elected and civic officials. She says her goals include taking care of people, striking a balance between readiness and modernization, and ensuring that public officials act as good stewards of taxpayer dollars. | Associated Press >>

Since March, retired Marine Capt. Andrew Bement has been trekking the Appalachian Trail ,  despite the fact that life as an infantryman turned him off hiking as a sport. Yet he continues on, accompanied only by his service dog, Mozzie. For it’s on the trail that he’s discovered the therapeutic power of nature, as he struggles with the physical and hidden injuries of two wars. | Task & Purpose >>

For Charlie Andrews, being a veteran with post-traumatic stress disorder used to mean experiencing flashbacks to his time in Iraq, being hypervigilant around his wife and children, and dozing off at work because he couldn’t sleep at night. Andrews, 42, has now learned to manage his anxiety and is using new coping skills to volunteer at his daughters’ schools and Girl Scout troops. He attributes that to Augusta’s Veterans Curation Program, vocational training that prepares veterans for the workforce through the preservation of prehistoric artifacts. | The Augusta Chronicle >>

Jimmy Farlow is a former Marine who was partially paralyzed by an enemy attack during the Vietnam war. His injuries have made it difficult to complete routine jobs like staining his back porch. A group of his fellow combat vets from Lynchburg are trying to help. They’ve spent the last few weeks staining Farlow’s deck and taking care of other jobs like cleaning out his shed and repairing the gutters on his house. | WDBJ 7 >>

Is Trump correct that that McCain — a Vietnam prisoner of war and current chairman of the Senate Armed Services committee — hasn’t helped his fellow veterans? The Trump campaign never got back to us, but McCain’s office did, and, not surprisingly, they begged to differ. They provided a wide variety of examples of things McCain has done for veterans during his nearly three-decade congressional career. Here are a few of the most recent ones: | Politifact >>

Sen. Steve Daines (R-Mont.) and Marine veteran Rep. Duncan Hunter (R-Calif.) introduced a bill Tuesday that would give troops the ability to carry weapons at military recruitment centers, following fatal attacks on service members last week in Chattanooga, Tenn. The bill is called the Securing Military Personnel Response Firearm Initiative Act, or “SEMPER FI” — a shortened version of the Latin phrase for “Always Faithful,” the motto of the Marine Corps. | The Hill >>

With partisan battling over abortion on the rise, a Democratic senator withdrew a bill Wednesday expanding government fertility services for wounded veterans and blamed what she said was a Republican attack on women’s health care. A GOP senator said the changes he was pushing were designed to set priorities for an overburdened Department of Veterans Affairs. | Associated Press >>