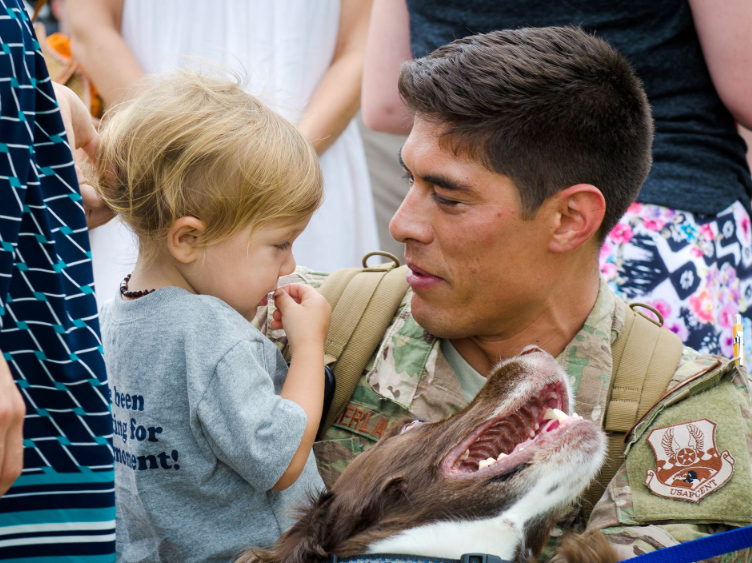 Capt. Trevor Sutherland, a pilot in the 165th Airlift Squadron, embraces his family during a homecoming ceremony at the Kentucky Air National Guard Base in Louisville, Ky. | Military Times >>

Deadline to plug VA budget shortfall looms for Congress
Congress has about three weeks left to sort out a $3 billion hole in the Department of Veterans Affairs budget or else risk shutting down some VA hospital operations. Officials from the department and key congressional committees have said they’re confident a plan can be worked out before the end of July, preventing any disruption in services to veterans. | Military Times >>

Veteran Community Backs New Accountability Bill, But This Government Union Stands In The Way
Congress’ latest attempt to reform the Department of Veterans Affairs by expanding firing authority to include all employees has been met with stringent opposition from the American Federation of Government Employees. Last year, Congress passed the Veterans Access, Choice and Accountability Act. This piece of legislation allowed Robert McDonald, the secretary of the VA, to fire senior executives in the department. | Daily Caller >>

The New Goal at the VA: Treating the Root Causes of Veterans Pain
Alternative therapy — from acupuncture to yoga — is a key part of the VA’s new effort to reduce vets’ dependence on highly addictive pain medication. The Minneapolis Veterans Medical Center is helping lead the effort, with a first-in-the-nation chronic pain program that emphasizes education and other alternatives to drugs. | Minneapolis Star Tribune >>

At least 33 people were killed and 23 others wounded in a suicide attack near a U.S. base in eastern Afghanistan, officials said. A suicide car bomb went off near a coalition forces base in the city of Khost on Sunday evening, according to Faizullah Ghairat, police chief of Khost Province. | CNN >>

The Islamic State of Iraq and Syria (ISIS) released an online audio clip Monday they claim came from the leader of an Afghan affiliate that authorities there say was killed in a U.S. airstrike. | Associated Press >>

Born in Long Island, the Davidson soldiers — two brothers and a cousin, all Army colonels — have served all over the globe. Now they’re all together again, this time in Kabul, Afghanistan. It may not be the kind of family reunion they were hoping for, but they’ll take it. | NY Daily News >>

The Iraqi government declared on Monday that it was beginning a major military operation to retake the western province of Anbar from the Islamic State, which occupies much of the area including its major cities, Ramadi and Falluja. | New York Times >>

The U.S. on Monday delivered the first lot of F-16 fighter jets to the Iraqi government to be used in the fight against Islamic militants. Brett McGurk, the administration’s deputy special presidential envoy to the coalition against the Islamic State in Iraq and Syria (ISIS), confirmed the deliver on Twitter. | The Hill >>

[Video] A wave of car bombs and suicide blasts in mainly Shi’ite districts of the Iraqi capital has claimed at least 35 lives. Paul Chapman reports. | Reuters >>

The Army’s principal regulation for military awards has been updated to reflect several policy and procedural changes since the last major revision nine years ago. The new Army Regulation 600-8-22 was published June 25 and will take effect July 25. The Army last updated the regulation with a series of rapid action revisions in June 2013, and a major revision in December 2006. | Army Times >>

The U.S. Navy is currently in the midst of Pacific Partnership 2015, — the largest annual multilateral humanitarian-assistance and disaster-relief preparedness mission in the Indo-Asia-Pacific region, according the Navy. | Stars and Stripes >>

Three aircraft and dozens of airmen in a New York-based Air National Guard unit are heading to Greenland as part of its annual mission to support the National Science Foundation. The LC-130 cargo planes and more than 70 members of the 109th Airlift Wing are departing Monday morning from Stratton Air National Guard Base in Scotia in Schenectady County. | Air Force Times >>

One New York City veteran has started a moving company, Veteran Movers NYC, and 17 of his 20 employees are fellow vets. Jesse Gartman worked as a mover after his time in the Marines, which included a deployment to Iraq. | My Fox NY >>

Be on the lookout for Navy Veteran Chris Ring and his crew swimming down the Mississippi River the next few days. Last week we told you about Ring’s story as he swims the length of the Mississippi River to honor our fallen heroes. At the time he was at Camp Ripley and today (Monday) and tomorrow (Tuesday) will be in the St. Cloud area. | WJON >>

Dozens of “Wounded Warriors” are one step closer to healing after riding the waves this weekend. The 11th Annual Watersports Festival for injured servicemen and women was held in the Rockaways Sunday. | CBS New York >>

Two cases of criminal activity at the Department of Veterans Affairs involve, separately, kickbacks and stealing of gravestones. In a case out of New Jersey, a former supervisory engineer at a Veterans Affairs facility in East Orange, N.J. is headed to prison for 46 months for accepting more than $1.2 million in kickbacks from contractors, and for falsely claiming one of the companies was owned by a service-disabled veteran, according to federal prosecutors. | Washington Post >>

Over the coming weeks leading to DAV’s 2015 National Convention in Denver, Colorado, we will be alerting you, other DAV supporters, and convention delegates to the critical issues and emerging threats facing VA health care in the aftermath of the 2014-2015 access-to-care crisis and how DAV believes the system can be reformed to better serve the health care needs of the men and women for whom this system was designed. This alert is the first of those messages. | Disabled American Veterans >>