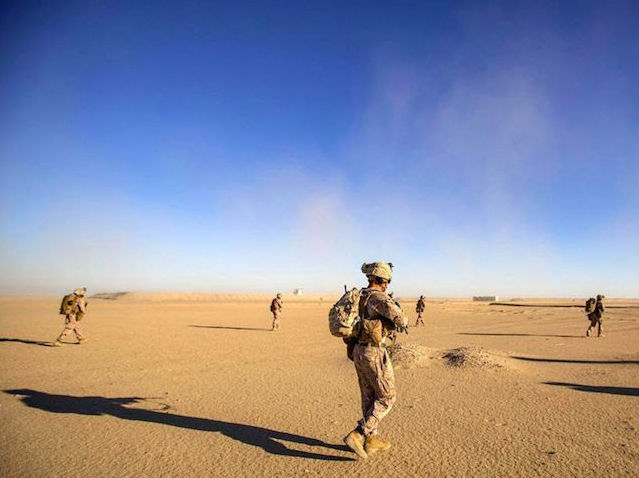 Marines patrol during a tactical exercise at an undisclosed location in Southwest Asia. | Military Times>>

Despite Recent Gains, Restrictions Persist For Service Dogs At VA Facilities
In recent years, there have been significant policy changes at the Department of Veterans Affairs regarding the admittance of service dogs at healthcare facilities, though in some cases they still face restrictions. Specifically, service dogs are prevented from staying overnight during inpatient care. | Task & Purpose >>

Actual Veterans Are A Scarce Sight In Top Veterans Affairs Hospital Jobs
Despite a long-running government-wide push to hire veterans, only 13 percent of the top officials managing Department of Veterans Affairs (VA) healthcare system medical facilities are veterans and only two of those facilities are run by doctors who served in the military, according to an analysis by The Daily Caller News Foundation. | The Daily Caller >>

Two wounded American soldiers and the body of a third have been evacuated from a battlefield in southern Afghanistan after hours of clashes, a U.S. military official said Wednesday. | CBS News >>

The United Nations Assistance Mission in Afghanistan (UNAMA) today condemned a spate of bombings in civilian areas of Kabul by the Taliban in the first few days of the New Year. | UN News Centre >>

Federal prosecutors filed additional charges Wednesday against a U.S. terror suspect, accusing him of assisting in a 2009 bombing attack on a U.S. military installation in Afghanistan. | USA Today >>

The US-led coalition that has been carrying out air strikes against the Islamic State group in Iraq and Syria killed about 2,500 jihadists last month, a military spokesman said Wednesday. | AFP >>

While many Iraqi Shiites took to the streets in outrage over Saudi Arabia’s execution of a prominent Shiite cleric, the country’s prime minister has had to walk a more cautious line, trying to contain Iraq’s own explosive sectarian tensions. | Associated Press >>

Iraq dispatched its foreign minister to Tehran on Wednesday with an offer to mediate in an escalating feud between Saudi Arabia and Iran, reflecting Baghdad’s fears that new sectarian conflict could unravel its campaign against Islamic State. | Reuters >>

Women hoping to join U.S. Special Forces will face a temporary delay, Pentagon spokesman Peter Cook announced Tuesday. In a briefing with reporters, Cook said that Gen. Joseph Votel, Commander of U.S. Special Operations Command, “requested and was granted a short extension in order to give Special Operations Command the time to collaborate thoroughly with the services.” | CNN >>

The ashes of World War II veteran Elaine Harmon are sitting in a closet in her daughter’s home, where they will remain until they can go to what her family says is her rightful resting place: Arlington National Cemetery. Harmon piloted aircraft in World War II under a special program, Women Airforce Service Pilots, that flew noncombat missions to free up male pilots for combat. Granted veteran status in 1977, the WASPs have been eligible to have their ashes placed at Arlington with military honors since 2002 . | Associated Press >>

GSA officials appeared before a House subcommittee on Jan. 6 to show how the agency is fixing the bungled management of an Army childcare subsidy program. The hearing, held by the House Subcommittee on Government Operations, was convened to evaluate the agency’s progress in cleaving down a backlog of nearly 26,000 service requests made as a result of the agency’s management of the Army Fee Assistance Program. | Federal Times >>

Gunnar Counselman used the no-B.S. communication style he learned in the Corps to launch his own company around reforming education. A lot of us slow down after the military. We served the country and are ready to enjoy some of the fruits of that service. Cold beer on a warm night; that kind of stuff. And then there’s Gunnar Counselman. | Task & Purpose >>

Boulay is a veteran of the Iraq war. He enlisted in the Marine Corps Reserve in 1997 and served in the invasion of Iraq in 2003. His experience as a soldier and veteran is central to his art currently on exhibit at Chemeketa Community College’s Gretchen Schuette Art Gallery. | Statesman Journal >>

One of the worst moments in Judas Recendez’s life helped him find a new voice. After losing both legs in an IED explosion in Iraq, the U.S. Army veteran who spent his youth in Visalia has found a way to express himself through art. | Visalia Times-Delta >>

The [Los Angeles] Board of Supervisors Tuesday approved $7 million in funding to help get homeless individuals — particularly women and veterans – – off the street and into housing quickly. Supervisor Mark Ridley-Thomas recommended transferring $2 million to Housing for Health, a program run by the Department of Health Services that he said has a proven track record of quickly sourcing supportive housing . | Los Angeles Daily News >>

The Pentagon is poised to order the military services to review more than 1,000 medals issued since the 9/11 terror attacks for possible upgrade to the Medal of Honor, the country’s highest award issued for valor in combat, according to documents obtained by USA TODAY. | USA Today >>

A key executive in the wait list scandal at the Phoenix Veterans Affairs Health Care System claims he’s been held on paid administrative leave for 19 months because the VA lacks evidence to fire him. | Stars and Stripes >>