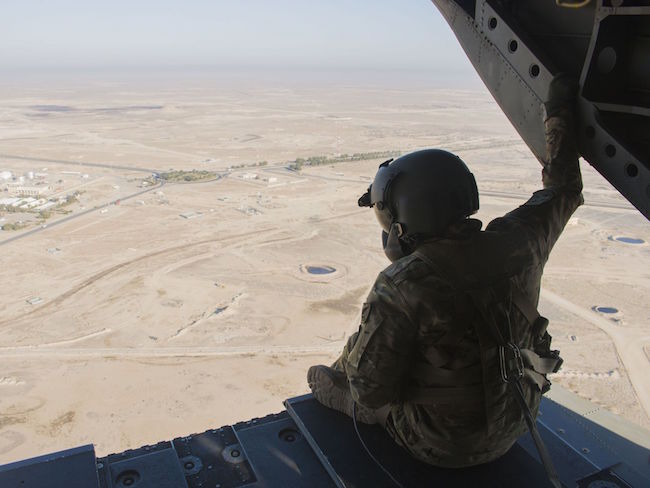 Some VA workers in disbelief as two controversial executives return to high-paying jobs
Some employees across the scandal-ridden Department of Veterans Affairs reacted with disbelief when two directors were reinstated Monday despite findings of wrongdoing and as VA Deputy Secretary Sloan Gibson tried to tamp down the controversy. | Stars and Stripes >>

Afghan government and Taliban representatives are expected to meet in Islamabad by the first week of March for their first direct talks since a previous round of the peace process broke down last year, officials said on Tuesday. | Reuters >>

Afghan ground forces and coalition airstrikes have killed up to 43 Islamic State militants in attacks in eastern Afghanistan, officials said Tuesday. The group, which has occupied large areas of Syria, Iraq and Libya, has been struggling to establish a foothold in Afghanistan over the past year. It continues to face tough resistance from security forces and the local Taliban. | Stars and Stripes >>

Following two incidents in the past week that put access to health care in Afghanistan under attack, the United Nations mission in the country has urged all parties to refrain from targeting hospitals and to take all feasible precautions to prevent casualties among their patients and personnel. | UN News Centre >>

The government of Iraq’s semi-autonomous Kurdistan Region said Tuesday that Kurdish troops had rescued a 16-year-old Swedish girl who was “misled” by an Islamic State of Iraq and Syria (ISIS) militant and travelled to Syria and then onto the extremists’ stronghold in Iraq. | CBS News >>

The number of private contractors working for the U.S. Defense Department in Iraq grew eight-fold over the past year, a rate that far outpaces the growing number of American troops training and advising Iraqi soldiers battling Islamic State militants. | Defense One >>

ISIS isn’t just losing in Benghazi. In its home base in Syria and Iraq, it’s lost up to 30 percent of its territory from its peak in August 2014. And it’s tried expanding abroad, officially declaring a wilayat — which literally means “province” and refers to ISIS’s foreign franchises — in roughly a dozen countries. | Vox >>

The Army expects to make its recruiting goal of 62,000 soldiers annually in 2016 and 2017, but recruiters will face “significant challenges due to lower entry pools and a more competitive recruiting environment,” according to budget materials submitted to Congress in early February. | Army Times >>

Former NATO commander and retired Navy admiral James Stavridis speaks often of his proposal to develop a fifth U.S. military service branch — a cyber force that would own operations in the virtual domain. But comments last week from Chief of Naval Operations Adm. John Richardson and Marine Corps Commandant Gen. Robert Neller indicate the time has not come for that idea just yet. | Military.com >>

Today marks 71 years since U.S. Marines raised the American flag atop Mount Suribachi on the Japanese island of Iwo Jima. The iconic event took place during one of the most significant battles of the Pacific Theater in World War III. Throughout the day, the Marines Corps’ official Twitter account has been live-Tweeting the battle as if it was happening in real time. | cleveland.com >>

In 2014, more than 530,000 service members received treatment for post-traumatic stress disorder at facilities run by the US Department of Veterans Affairs. Before he even left the military, Goldsmith says PTSD began to affect his life. He was written up in 2007 for missing his flight to Baghdad for his second deployment. The reason why Goldsmith wasn’t on that plane? He was in a hospital after attempting suicide the night before. | Public Radio International >>

Kristopher Maham’s life as a college student is anything but traditional. He is a U.S. Air Force veteran, husband, father of two girls and a first-time undergraduate student at the age of 37 in Arizona State University’s Ira A. Fulton Schools of Engineering. Now he is further distinguishing himself through a prestigious internship with the National Aeronautics and Space Administration (NASA). | ASU Now >>

Task & Purpose interviews James D. Dever, a former Recon Marine, about his career as a military advisor in Los Angeles. There are plenty of obvious career opportunities for men and women separating from the military. The skills, knowledge, and mindset a person acquires in the service translate seamlessly into jobs in law enforcement, defense contracting, and project management. | Task & Purpose >>

House Republicans urging a steep increase in the Pentagon’s budget have received $10 million in campaign contributions over the course of their congressional careers from defense contractors that would benefit from higher levels of military spending. | Associated Press >>

Magnasco, who served as an Army infantry medic, works as a district representative and veteran’s liaison for Congressman Seth Moulton (D-MA). Magnasco told ABC News he gets great care from the VA, but it’s difficult to gain access to the system. The issue is one Moulton, a fellow veteran, has been working to solve. He introduced the Faster Care for Veterans Act last month with Congresswoman Cathy McMorris Rodgers (R-WA). The bill is designed to improve the way veterans access health care by introducing self-scheduling technology that could be used on a smartphone or computer. | ABC News >>

Members of the group Burn Pits 360 are in Washington D.C. this week pushing for legislation to help veterans with health problems from exposure to burn pits. The open-air fires were used by the military in Iraq and Afghanistan to burn trash that often included rubber and plastic items. A national registry shows approximately 56,000 soldiers were exposed to the toxic fumes. | KRIS-TV >>