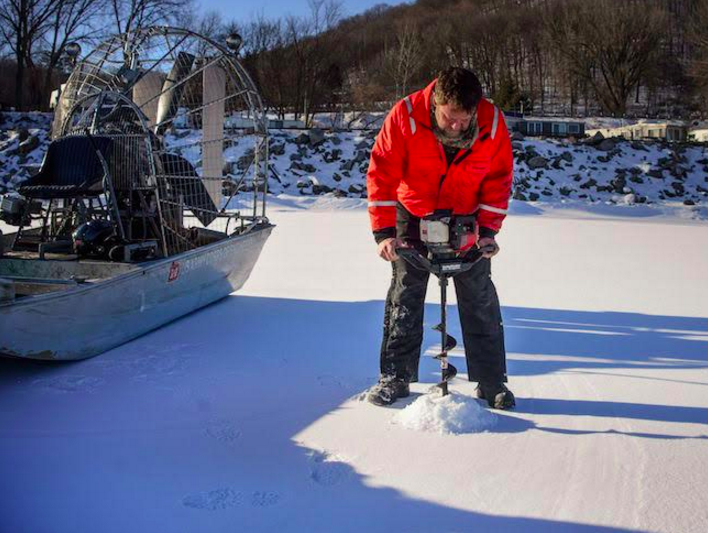 William Chelmowski drills a test hole in frozen Lake Pepin in Minnesota. A team from the Army Corps of Engineers tested the ice thickness on Lake Pepin to get an estimate for when the first towboat might break through to St. Paul to open the season. | Glen Stubbe/Star Tribune via AP >>

Veterans Seek Greater Emphasis on PTSD in Bids to Upgrade Discharges
In recent years, less than honorable discharges have dropped drastically; and today, troops with PTSD are more likely to be medically discharged with benefits. But that has done little to help those like Mr. Goldsmith who were discharged before the changes. | New York Times >>

Lawmakers push to link veterans’ COLA with Social Security
Veterans always get the same annual cost-of-living increase as Social Security recipients. But there’s no guarantee that will continue. That’s why lawmakers are again pushing for new legislation that would permanently tie together the two rate increases, and thus avoiding a potential payout hiccup if congressional politics stalls what is normally routine business. | Military Times >>

CT Leads the Way on Fight Against Veteran Homelessness
Connecticut Governor Dannel Malloy gave us a taste today of what can be achieved when good government works closely with caring and motivated constituents — the end of veteran homelessness in his state. How Connecticut accomplished this feat is worth highlighting as others try to reach the same goal. | Huffington Post >>

The U.S. Air Force says that one of its drones has crashed at a base in southern Afghanistan but there were no casualties and no hostile fire is suspected. | New York Times >>

For all the conflicts in the world in which Washington is at odds with Moscow, the deteriorating security situation in Afghanistan has been one area where the Obama administration’s interests and Russia’s concerns coincide. | New York Times >>

Five Red Cross staff members, kidnapped by a group of armed men in the central Afghan province of Ghazni on Tuesday, were released unharmed, the aid group said on Friday. “We are immensely relieved to know our five colleagues are free and in good health,” Jean-Nicolas Marti, head of the International Committee of the Red Cross delegation in Kabul said in a statement posted on the group’s Facebook page. | Reuters >>

“El-Humdelilah.” That’s what Iraq’s deputy health minister, Dr. Jassim al-Falahi, told CNN on Sunday: “Thank God.” Al-Falahi’s sigh of relief was over the discovery of some potentially deadly radioactive material that had been missing for months. | CNN >>

As fighting in Iraq raged last summer, Iranian Major-General Qassem Soleimani came across unexpected opposition to his plans to defeat Islamic State. Soleimani is the commander of Iran’s al-Quds brigade and has been a key figure in the fight against the Sunni Islamist group in Iraq. That fight has been led not by Iraq’s army but by Iranian-backed Shi’ite militias. | Reuters >>

The U.S. Air force’s lumbering swing-wing bomber, the B-1B Lancer, is taking a back seat in the air campaign against the Islamic State. Lt. Gen. Charles Q. Brown, commander of the Air Force’s Central Command, told reportersThursday that the B-1s had been redeployed back to the United States for scheduled upgrades to the aircraft’s cockpits. | Washington Post >>

No plan survives first contact with the enemy, according to the old military adage, so military equipment is designed to work under a variety of circumstances. What if, though, the Army could know exactly what kind of drone scout they’d need tomorrow, and could print it in 24 hours near the battlefield, ready to use the next day? Earlier this month the Army selected on-demand 3D-printed drones as one of the technologies they’ll test in the 2017 Army Expeditionary Warrior Experiments. | Popular Science >>

U.S. Marines are operating in an Arctic nation this month — an effort that includes learning to “drift” 60-ton M1A1 Abrams tanks like they’re part of “The Fast and The Furious” movie franchise. The training is one of the more novel aspects of Cold Response 2016, a joint military exercise beginning this month in Norway that includes 16,000 troops from 13 countries, including Britain, Germany and Poland, as well as 3,000 U.S. service members. | Washington Post >>

“He’s a Korean [War] vet who owns it and he just wants to give back,” Henline said. “He’s had it for 25 years and he wants to train other veterans to have their own restaurant.” Now, Henline plans to follow in his friend’s footsteps by opening a restaurant fully-run by fellow veterans. “My plan is to hire a veteran to be my manager,” Henline explained. “We want to hire veterans to work for us, too. I hate asking for money. I don’t feel like anyone owes us veterans anything. We chose to do this. We chose to go and serve.” | Wide Open Country >>

Eleven years ago, Gulf War veteran Bryan Ashley-Selleck tried to take his own life. Suffering from post-traumatic stress disorder, he said, he’d sought help from the Department of Veterans Affairs and been in and out of psychiatric wards. Now a weekly gathering with other veterans to ski in the winter and kayak, hike and bike at other times of the year is giving him a chance to help other veterans by sharing his story. He says it’s also helping him to heal himself. | AP >>

How do you tell the story of the man who saved your life? To even try to describe why a man would risk death for another, I think you have to begin with the things he cherishes most in life: home and family. My savior is an Iraqi, a Muslim, a husband and a father. Not long ago, we were soldiers in the Iraq war. I wore the Stars and Stripes on my shoulder. He carried the Red, White and Black of Iraq on his. To protect him and his family, I’ll call him the Captain. | National Geographic >>

One major reason the Veterans Affairs Department can’t fire troublesome employees: Bernie Sanders. The Obama administration is moving to undo the Democratic presidential candidate’s past work as Senate Veterans’ Affairs Committee chairman in an effort to clean up the department, considering a change in employment rules for VA executives that Sanders fought for vigorously just two years ago. | Military Times >>

[Video] Gary Tuchman speaks with several veterans in South Carolina to find out where they stand ahead of the state’s primary. | CNN >>