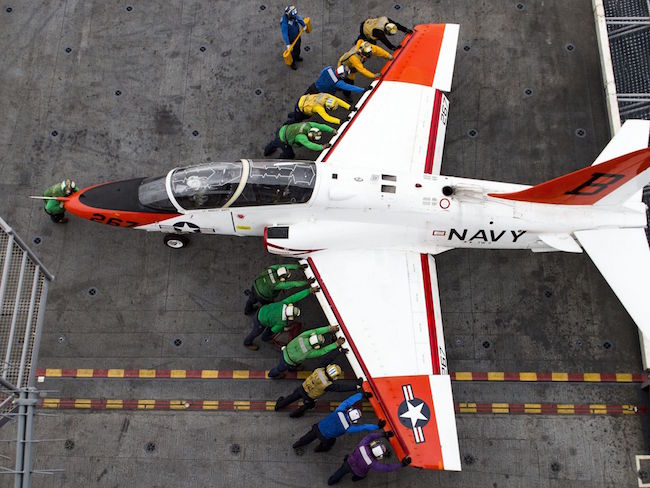 Obama proposes 5 percent hike in VA budget
The discretionary budget for the embattled Department of Veterans Affairs would rise by about 5 percent under President Barack Obama’s proposed 2017 budget, which includes spending increases to improve the much-criticized claim appeals process and using some funds aimed at giving veterans access to outside care to pay for VA staffing and infrastructure. | Stars and Stripes >>

Troops’ kids face deep cut in GI Bill housing stipend
Military dependent children using transferred Post-9/11 GI Bill benefits would see their housing stipends cut in half under legislation being considered Tuesday by the House of Representatives. That stipend is one of the most valuable parts of the Post-9/11 GI Bill, calculated in most cases based on the Basic Allowance for Housing, or BAH, that active-duty service members would receive if stationed where the school is located. | Military Times >>

In the Pentagon’s new budget, the Air Force won and the Navy and Army lost
The U.S. government released its proposed $4 trillion budget for fiscal 2017 on Tuesday, and the Pentagon’s slice of the pie is about $582.7 billion. That represents less than a 1 percent increase over the $580.3 billion budget for fiscal 2016 at a time when the U.S. military is balancing operations in Iraq, Syria and Afghanistan, aggressive actions by Russia and China and the modernization of a force that has been at war since 2001. | Washington Post >>

The Pentagon will deploy dozens of additional U.S. military advisers to southern Afghanistan in coming weeks, a U.S. military official said, part of an effort to rebuild the Afghan army unit that has faced a bloody fight in Helmand province. | Washington Post >>

At least 15 Taliban insurgents have been killed in a joint Afghan and foreign troops air strike in southern Helmand province in Afghanistan. The air strike took place in Nad Ali and Greshk districts of the province in which a vehicle of the insurgents were also destroyed, reports TOLO News. | Business Standard >>

Despite Taliban gains and the Islamic State’s emergence in Afghanistan, one amazing Kabul school continues to teach 4,000 students (half girls) to think independently and to believe in tolerance. The private Marefat school, along with its founder Aziz Royesh and several girl students, is the subject of Jeffrey Stern’s moving new book, “The Last Thousand: One School’s Promise in a Nation at War.” | The Vindicator >>

Iraq’s war against the Islamic State is gaining momentum. Intensified U.S. airstrikes and more than a year of U.S. training of Iraqi soldiers seem to be paying off. ISIS supply lines have been cut and its access to oil has been reduced. When Iraqi forces with coalition airstrikes retook the western city of Ramadi, it was the latest in a series of successes. | NPR >>

Iraq’s Mosul Dam has long been branded the world’s most dangerous dam, at risk of collapsing and sending water crashing over millions of people. That prospect is even greater than was previously believed after the Islamic State group captured the dam briefly in 2014, according to a new report by U.S. Army engineers. | Associated Press >>

Iraqi forces recaptured territory east of Ramadi from Islamic State militants on Tuesday, linking the Anbar provincial capital to a major army base nearby, and officials appealed for international funding to help clear the city of explosives. | Reuters >>

The Navy is turning to a former Cold War air base for a familiar mission — hunting Russian submarines. The service is asking for funds to upgrade an aircraft hangar at its former base in Keflavik, Iceland, as part of the Defense Department’s fiscal 2017 budget request, according to Navy officials. | Stars and Stripes >>

Marines applying for tuition assistance for the first time must now take a new introductory online course. Effective immediately, completion of the Higher Education Preparation course is mandatory for approval to the program and replaces the previous College 101 requirement at all installations, according to Marine administrative message 040/16. | Marine Corps Times >>

First, the good news: The Army’s top general has approved a proposal allowing soldiers to wear earbuds when working out in a gym in their PT uniform. The bad news: It’s not quite official yet, so leave those earbuds at home tomorrow morning. | Army Times >>

Jamel Herring laughs at the memories. The undefeated 30-year-old lightweight is allowed to do so. All real tough guys are permitted such releases. It is like a special club that only the brave are allowed to join; it comes from an inherent steely resolve constantly whispering in their heads saying they can grin down danger. Herring has experience in that department. He has seen roadside IEDs blow up. He has had RPG rockets whizz across his head. | SherDog >>

Four years ago, Lt. Bradley Snyder was recovering from a bomb blast that took his eye sight and required numerous reconstructive surgeries on his face. Today, his inspiring recovery from blast survivor to U.S. Paralympic champion is the subject of a forthcoming film. | Navy Times >>

A near-homeless U.S. Navy veteran from Parrish, who got help from Goodwill Manasota and Turning Points, has been named program manager for the group’s new Homeless Veterans Reintegration Program. New York native Rich Lopez, 47, is the perfect person to run the program because he’s gone through what many veterans experience, including struggling to find work and keeping a roof over his head, said Veronica Brandon Miller, Goodwill’s vice president. | Bradenton Herald >>

The presidential campaign issue of veterans health care is worth keeping a close eye on, even if you aren’t a veteran or a close family member of one. The matter came up at both of the two most recent presidential debates. It’s in the news not only because of the scandal over long wait times for care at Veterans Administration hospitals and the cover-up of the same scandal, but because the differences between Republicans and Democrats on the issue illuminate a stark ideological divide. | New York Sun >>

The U.S. Department of Veterans Affairs has once again turned down an effort by Navy veterans to get compensation for possible exposure to Agent Orange during the Vietnam War. | The Virginian-Pilot >>