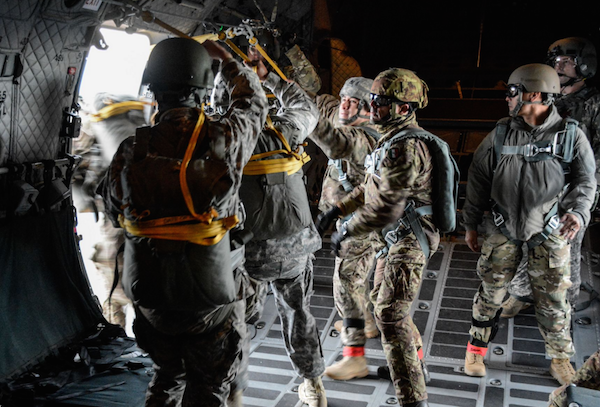 Every U.S. Military Dog Will Be Brought Home, Thanks To New Law
The heroic pups who courageously serve and paw-tect our country are finally getting the recognition they deserve. President Barack Obama signed a bill into law last month that guarantees the safe return of all retired military dogs to the United States after serving abroad. | Huffington Post >>

VA Program Helps Incarcerated Veterans Transition Back Into Society
“What we’re trying to do is ensure that when veterans do have contact with the criminal justice system, that there are effectively off-ramps into needed treatment,” Clark says. That’s why each VA medical center in the U.S. has at least one person who has to reach out to vets behind bars. | NPR >>

Newly appointed VA regional director opts out of job
A Department of Veterans Affairs administrator who was assigned to lead the beleaguered Southwest regional health-care system has opted not to take the job at the last minute. A spokeswoman for the VA Southwest Health Care Network, known as VISN 18, said Skye McDougall elected to take a similar assignment in Mississippi just as she was scheduled to take the helm at the regional office based in Gilbert. | The Arizona Republic >>

At least three Taliban gunmen have launched an attack at the airport in the southern Afghan city of Kandahar, according to multiple news reports. An Afghan official told The Associated Press that the attacks started with the Taliban targeting the facilities main gate. The clashes are reportedly still underway. | Washington Times >>

International medical charity, Doctors Without Borders, on Monday submitted a petition to the White House requesting an independent investigation into the US’s October 3 attacks on a trauma center in Afghanistan. | The Independent >>

More than 50 people have been killed and dozens more wounded in renewed fighting between rival Taliban factions in Shindand district near the western Afghan city of Herat, a local police spokesman said on Tuesday. | Reuters >>

Iraq asked NATO on Tuesday to put pressure on alliance member Turkey to withdraw its troops immediately from northern Iraq after Ankara said it would not deploy any more but refused to pull out those already there. | Reuters >>

Iraqi troops on Tuesday retook a neighborhood on the outskirts of Ramadi, a provincial capital west of Baghdad that was captured by the Islamic State group earlier this year, officials told The Associated Press. | Fox News >>

As the debate on how best to contain the Islamic State continues to rage in Western capitals, the militants themselves have made one point patently clear: They want the United States and its allies to be dragged into a ground war. | New York Times >>

Soldiers’ Social Security numbers will no longer be part of their dog tags, the Army announced Tuesday. The change, which some have argued is long overdue, is the first update to the ubiquitous identification tags in more than 40 years. | Army Times >>

Speaking at the U.S. Naval Institute’s annual Defense Forum on Monday, Adm. John Richardson said the sea service today finds itself in a challenging position, with financial constraints, limited buying power and key global competitors, including Russia and China, who are quickly developing parity in terms of ability. As technology develops at an exponential rate, Richardson said he sees the Navy lagging behind. | Military.com >>

After an IED strike took part of his arm, James Sides received a prosthetic hand that seems plucked from a sci-fi movie. On July 15, 2012, Marine Staff Sgt. James Sides’ life was dramatically changed when he was badly injured during his second tour to Afghanistan. Sides served as an explosive ordnance disposal technician and was attempting to disarm an improvised explosive device when it detonated underneath him. | Task & Purpose >>

A 27-year-old military veteran is driving from the Florida Keys to Houston, Texas, raising money along the way to give to others who’ve struggled since leaving the military. | WJCT News >>

Naval Postgraduate School student Army Maj. Dennis “DJ” Skelton, of Elk Point, South Dakota, has been given a rather unfortunate moniker — one he likely would prefer not to have. In 2011, following devastating injuries Skelton had suffered in combat, he was coined the “Most Wounded Commander in U.S. Military History.”
| Department of Defense >>

Federal officials could save almost $6 billion a year by shifting tens of thousands of military jobs to civilian employees, according to a new report from the Congressional Budget Office. Researchers estimate that up to 80,000 retail supply jobs across the services could be performed as effectively and likely cheaper by nonmilitary personnel, whose benefits and training demands add significantly to overall costs. | Military Times >>

The Army has recommended that David H. Petraeus, the retired general and former CIA director who quit in a scandal three years ago, not face further punishment for having an affair with his biographer and providing her with top-secret materials, according to Pentagon officials. | Washington Post >>