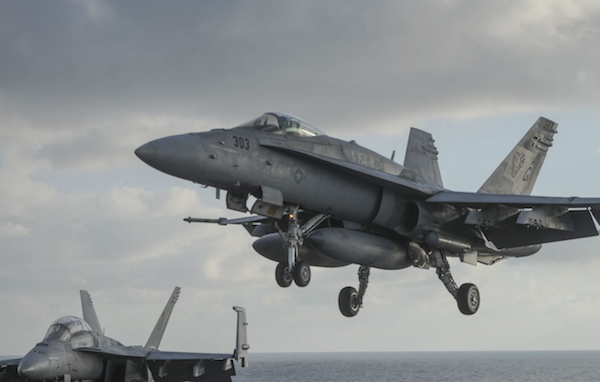 An F/A-18 Hornet lands aboard the nuclear-powered aircraft carrier Harry S. Truman during a visit by Ukraine’s Prime Minister Arseniy Yatsenyuk at an undisclosed position in the Mediterranean Sea, south of Sicily. | Military Times >>

Are Better Days Ahead for Our Veterans?
Homelessness, suicide and unemployment, along with physical and mental health problems and drug and alcohol abuse issues, have continued to plague our veterans from recent wars. But there are some encouraging trends. | Huffington Post >>

Army Says It Will Review Cases Of Dismissed Soldiers With Mental Health Problems
The acting secretary of the Army, Eric Fanning, promises to conduct a “thorough, multidisciplinary review” to determine whether thousands of combat soldiers with mental health problems or traumatic brain injuries have been unfairly kicked out of the Army for misconduct. | NPR >>

Vietnam Veterans Still Have PTSD 40 Years After War
Diane Evans puts down the phone to remove her pecan pie from the oven in preparation for holiday festivities with her family. When she returns, she continues recounting her war terrors — this time, the ones that came back to her in dreams: bloodied faces and dismembered bodies of soldiers and children covered in third-degree burns, patients she treated and some she watched die in Vietnam more than 40 years ago. | U.S. News & World Report >>

A joint Afghan-U.S. special forces operation freed at least 40 Afghan prisoners from a Taliban prison in the southern Helmand province, authorities said Friday. The troops carried out a helicopter assault on the prison in Nawzad district Thursday night, according to a statement from U.S. forces in Afghanistan. | Fox News >>

The United Nations mission in Afghanistan today condemned the recent killings of nine civilians when an explosive ordinance was fired into the village of Shahi Khil in Wardak on 4 December, allegedly by Afghan forces. | UN News Centre >>

When U.S. soldiers and Marines returned from Iraq and Afghanistan, many left behind local translators who they’d worked closely with. These people often became the target of reprisals and death threats, forcing them to flee their own country. For the past few months, Aaron Fleming, a former Marine sergeant, has been trying to help his former translator, Sami Khazikani, make it to the U.S. after he had to leave Afghanistan. | NPR >>

The Islamic State of Iraq and Syria (ISIS) is increasingly using human shields — particularly children — to prevent the U.S.-led coalition from carrying out airstrikes in key areas such as Ramadi, according to a senior Obama administration official who briefed reporters at the White House. | CBS News >>

The U.N. human rights office in Iraq said on Friday that it has received reports of 16 mass graves discovered near the town of Sinjar after it was liberated from the Islamic State group last month. The reports were the latest among many instances of mass graves being uncovered in territory wrested from IS militants in Iraq and Syria — thousands of people have been killed in summary and extrajudicial killings by the Sunni militants and the graves have been a dark testimony to the group’s brutality. | Associated Press >>

Paul Bremer, the former American diplomat who presided over the initial stages of the U.S. occupation of Iraq, wants the Obama administration to redeploy 10,000 U.S. troops to the country to aid the fight against the Islamic State. | Washington Post >>

The U.S. Army on Thursday grounded aircraft for active duty aviators at 11 posts across the country following a series of deadly crashes in recent weeks. According to a release from the U.S. Army Forces Command, the order “will permit Army aviation leaders specific time to review Army aviation-training procedures and helicopter-safety precautions to manage risk, and to avoid accidental loss of aviation personnel and equipment.” | CNN >>

A Vermont National Guard soldier is the first woman in the U.S. Army to qualify as a combat engineer. Spc. Skylar Anderson, of Derry, New Hampshire, says it was a “big eye-opener” when her instructors told her over the summer that she was the first woman to complete the course allowing her to work alongside combat troops. | Fox News >>

Within a year, maybe in just a few months, a young soldier with a horrific injury from a bomb blast in Afghanistan will have an operation that has never been performed in the United States: a penis transplant. | New York Times >>

Marine veteran James P. Connolly (Sirius/XM Radio, Comics Unleashed) hosted the 6th Annual Veteran’s Day Benefit Comedy Show “Cocktails & Camouflage,” at Flappers Comedy Club in Burbank, California in early November. All funds raised were donated to Veterans in Film & Television (VFT), a non-profit networking organization that unites current and former members of the military working in film and television and offers the entertainment industry the opportunity to connect with and hire veterans. | We Are The Mighty >>

Navy combat veteran Chris Ring of San Diego became the first American to swim the entire length of the Mississippi River on Friday (Dec. 4). Ring, a 28-year-old SEAL, arrived at Mile Marker 0, where the river empties in the Gulf of Mexico at Venice, at 3:52 p.m., a spokesman for the project said. The swim lasted 181 days and covered over 2,350 miles. | The Times-Picayune >>

A local army veteran was recently diagnosed with testicular cancer and is taking a unique positive approach on his diagnosis. Rather than announcing the news in a somber manner on Facebook, Anthony Woolf drew a picture of himself sitting next a three-eyed smiling figure wearing a nametag that reads, “Hello, I’m Cancer.” | KSL >>

The renewal of the expiring Zadroga 9/11 Health and Compensation Act continued to move forward in Congress on Thursday but still faces the hurdle of reaching an agreement on how to cover its $7 billion cost, activists and lawmakers said. | Newsday >>

“I didn’t lose my legs in a bar fight,” said Tammy Duckworth, one of the first Army women to fly combat missions during the Iraq War, after the Pentagon announced Thursday that it would open all combat roles in every branch of the U.S. armed forces to women starting on January 1. “Of course women can serve in combat.” | The Atlantic >>

In the wake of backlash against the Department of Veterans Affairs for not cracking down hard enough on employee accountability, its watchdog group released three new reports this week that demonstrate continuing problems at VA hospitals. | Washington Times >>