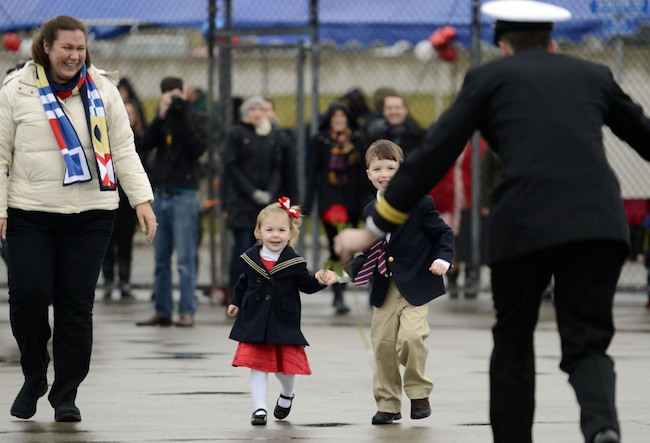 Navy Lt. Gregory Storer, right, races to greet his children, Mary and John, and wife, Elizabeth, as the attack submarine Hartford returns to the U.S. Navy Submarine Base in Groton, Conn., on Dec. 18, following a six-month deployment to the European Command Areas of Responsibility. | Military Times >>

Combat-related lung diseases lack diagnosis guidelines, researchers say
Evidence is mounting that veterans are suffering from pulmonary disorders related to deployment to the Middle East, but little is being done to diagnose and treat these illnesses, say researchers who are proposing new guidance for treating affected troops. | Military Times >>

How Cities And States Are Fighting Veteran Homelessness
The Obama administration, in June 2014, challenged local governments to find a home for all veterans who want one by the end of this month. At least nine states and 850 municipalities tried to meet the goal, but Virginia and 15 municipalities were the only ones that succeeded. | Huffington Post >>

Homeless Veterans Surviving Rape and Indifference
Female veterans are the fastest-growing segment of the homeless population in the United States and are four times as likely to be homeless as other women. Many of them are survivors of what the Department of Defense calls military sexual trauma, with symptoms including depression, substance abuse, paranoia and feelings of isolation. Yet, Ms. Calvert learned, these women are a hidden population. | New York Times >>

In one of the deadliest attacks against American forces in Afghanistan this year, a Taliban suicide bomber on a motorcycle drove into a military convoy near Bagram Air Base on Monday, killing six American soldiers, a United States official said. | New York Times >>

A U.S. Army veteran who became an aid worker was shot dead in her Kabul apartment building on Sunday night, officials said. Lisa Akbari, a dual U.S.-Afghan citizen had been living in the Karte Char area of the Afghan capital for three years, a senior police official said on condition of anonymity as he was not authorized to speak to journalists on the matter. Interior Ministry spokesman Sediq Sediqqi also later confirmed that Akbari had been fatally shot. | NBC News >>

The U.N. Security Council extended sanctions against the Taliban for 18 months in a resolution that warned of the increasing presence and potential growth of Islamic State affiliates in Afghanistan. | Associated Press >>

Islamic State militants are preventing civilians from leaving Ramadi ahead of an attack planned by the Iraqi army to retake the western city that the militants captured in May, an Iraqi Defence Ministry spokesman said on Monday. | Reuters >>

Ramadi fell to ISIS in May, embarrassing the Iraqi government and spurring criticism from the Pentagon that Iraqis lacked the will to fight. ISIS stormed the city, taking over the government headquarters and sending locals fleeing and spurring reports of massacres. The UN estimates that more than 180,000 people were displaced since ISIS began its push for Ramadi last April. Six months later, Iraqi commanders are preparing an assault on the center of the city. | MSNBC >>

New mandatory PME requirements kick in this year — as early as Jan. 1 for some — as the Army makes some sweeping changes to the way it educates soldiers. Under a new strategy called STEP, or “select, train, educate and promote,” soldiers must have the right level of education before they can be promoted to the next rank. | Army Times >>

For years, Tops in Blue has been derided by airmen who think it’s an outdated waste of money that should be shut down. But those complaints have been ignored — until now. The Air Force announced in a release Monday it is canceling the 2016 season of its traveling song-and-dance troupe to allow “an extended review of the program.” The Air Force had directly asked rank-and-file airmen — for the first time — what they think of the group in October. | Air Force times >>

Nuclear-armed U.S. submarines that went more than a decade without calling on foreign ports in part because of post-Sept. 11 security concerns are once again visiting other countries, a shift intended to underscore their global presence and lift sailor morale. | Associated Press >>

Donald Trump’s controversial vow to ban Muslims caused concern for many people, including an 8-year-old girl — but an Army veteran responded to the child’s concern in the perfect way that offered comfort, hope and an army of Americans to defend her. | Pix 11 >>

When Anthony Martinez joined three Greenway Automotive dealerships in Orlando as the stores’ reconditioning director two years ago, he was given these marching orders: Cut the time it takes to recondition and prepare used vehicles for sale. Drawing on his discipline as a former U.S. Army captain and his training in workflow management, Martinez increased the department’s productivity and reduced redundancy by combining some employees’ duties. | Automotive News >>

Walking down a creaking staircase in an old Fresno farmhouse last week, Guy Adams with The Heart of the Horse Therapy Ranch looks past the dust and debris to see what he hopes the place will one day become: a home for veterans. | Fresno Bee >>

A diverse group of organizations has filed briefs urging the Supreme Court to hear the case of a military child whose medical malpractice suit was dismissed because her injuries stemmed from complications during birth from her active duty mother. | Military Times >>

The massive $1.1 trillion spending bill passed by Congress and signed into law by President Obama last week contains an early Christmas present for the nation’s veterans. Or it could be a lump of coal — depending on your view about opioid pain medication. Buried in the 2,009 page document is a provision requiring the Veteran’s Administration to implement a number of measures to stop the “overdose epidemic” among veterans, including adoption of the controversial opioid prescribing guidelines being developed by the Centers for Disease Control and Prevention (CDC). | Pain News Network >>

Recognizing that hepatitis C is a major health problem among veterans, especially Vietnam-era veterans, Congress has earmarked $1.5 billion in the just-passed budget for the Department of Veterans Affairs to treat veterans with hepatitis C. | Military.com >>