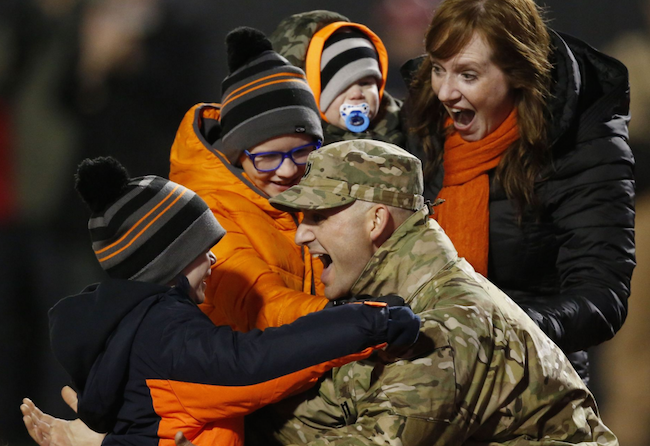 Air Force Capt. Dustin Ash, right, surprises his family during a timeout in an NCAA college football game between Oklahoma and Oklahoma State on Saturday in Stillwater, Okla. Ash came home early from a deployment in Kandahar, Afghanistan. | Military Times >>

Why evacuating wounded troops by air might do more harm than good
Over the last 15 years, the United States has flown its wounded troops out of combat zones to hospitals around the globe. The logic: get those hurt in places where medical supplies are limited to places where they are not. The fastest way to do this? By air. Yet according to a new, first-of-its-kind study conducted by the University of Maryland School of Medicine, rapid air evacuation has the potential to cause more damage to those patients suffering from an extremely prevalent battlefield affliction–traumatic brain injury. | Washington Post >>

Higher drug co-pays among new military health care changes
Congress is promising to launch a sweeping reform of the military health system next year, but lawmakers still made a few near-term tweaks to military medical policy in the 2016 Defense Authorization Act signed by President Obama just before Thanksgiving. Among those tweaks: An increase in the amount some Tricare beneficiaries will pay for prescription drugs, and new programs designed to improve patient care. | Military Times >>

The U.S. Embassy in Afghanistan issued an emergency message for U.S. citizens in the country’s capital Monday, saying it had received “credible reports of an imminent attack” within the next 48 hours. The statement said that there were no details available regarding the attack’s time, target or method. However, it urged Americans in Kabul to “exercise extreme caution if moving around the city.” | Fox News >>

By day, Stephanie Case is a human rights officer for the U.N. Office of the High Commissioner for Human Rights in Gaza. After hours, she operates the nonprofit Free to Run … and she’s probably running, too. In 2012, the competitive long-distance runner moved to Afghanistan, where she met women in a shelter who had experienced domestic abuse. | PBS >>

The leaders of Pakistan and Afghanistan met in Paris on Monday to discuss ways to resurrect peace talks with Taliban insurgents and to improve relations between the neighbors that soured earlier in the year after a string of militant attacks in Kabul. | Reuters >>

Warning of a further “dramatic” worsening of the humanitarian situation in Iraq, a senior United Nations relief official today urged increased international support to assist millions in need and to rebuild areas retaken from the Islamic State of Iraq and the Levant (ISIL) so people can return to their homes “voluntarily and safely.” | UN News Centre >>

Defections of Islamic State fighters — a closely watched measure by officials of U.S.-led coalition — have begun to thin the ranks of the militants in Iraq in the last month, intelligence reports and drone footage show. | USA Today >>

The Pentagon’s glitch-prone, $2.7 billion system of radar-equipped blimps — designed to safeguard the nation’s capital against cruise missiles and other airborne threats — has long been a source of frustration to military leaders. A month ago, it became a punch line. | Tribune News Service >>

In late August, the 29-year-old Cheek completed his nine years of service with the Army National Guard and recently moved back home to Monroe County. Cheek, a 2005 graduate of Tellico Plains High School and current Sweetwater resident, said he couldn’t get that conversation with the homeless veteran out of his mind. “I got woke up from a dead sleep,” he said. “Something told me I needed to do something.” Thus began Vittles 4 Vets, just one project of many that Cheek has in the works. | The Advocate & Democrat >>

When she was sworn into office in 2013, she became not only the first Hindu and the first American Samoan elected to Congress, but also one of the first female combat veterans. So it is no surprise that leaders in both parties have kept an eye on Ms. Gabbard, a risk-taker who loves to surf and ordered her wedding dress five days before her ceremony in April. | New York Times >>

The Defense Department’s inspector general is stepping down after a little more than two years on the job. Jon Rymer, the independent watchdog appointed by the White House, is leaving after overseeing a series of high-profile investigations. | Military Times >>

Congress returns from its Thanksgiving break with full stomachs and a full schedule of work leading up to another possible government shutdown Dec. 11. While budget negotiations go on in the background, congressional committees will focus much of their work on the aftermath of the Paris terrorist attacks. Defense Secretary Ash Carter will testify before the House Armed Services Committee on Tuesday, and House Foreign Affairs members will delve into the attacks later in the week. | Army Times >>

There is legislation moving in Congress that would change how VA medical centers handle patient pain management and prescription pain killer distribution. The bill is called the Jason Simcakoski PROMISE Act, in honor of the Stevens Point veteran that died after receiving a toxic cocktail of pain medications through the Tomah VA Medical Center a year ago. | WSAU >>