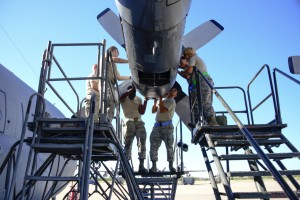 The job fair, focused on providing employment opportunities solely for veterans, was filled with a variety of mostly men of all ages and backgrounds. Some young, some old, others clean cut and others wandering in rumpled suits. | USA Today >>

Three days after Matt Fetterman was sworn into the Navy at the U.S. Merchant Marine Academy, he stood with his twin brother, Mark, and the other plebes behind their school overlooking the Long Island Sound and watched the second plane fly into the World Trade Center. | Stars and Stripes >>

“My path forward in the military was well-defined; I pretty much knew what my next position would be,” says Daniel Savage, veterans program manager at LinkedIn, who served as an infantry officer. But that clarity was lost when he began navigating the professional world as a civilian. | New York Post >>

Militants are increasingly targeting young professionals, schools, and educated members of society in Afghanistan and neighboring Pashtun areas in Pakistan. Experts say the tactic is aimed at increasing the number of uneducated youth – a prime demographic targeted by militant group recruiters. | Voice of America >>

Hoshyar Zebari should have been preparing for loan negotiations that could save his country from economic collapse. Instead, Iraq’s finance minister sat in his office waving a file of papers he claims prove that billions of dollars of state money was embezzled by rival politicians. | Financial Times >>

The speeches from the governor and the senator were over, the Sunday morning ceremony in front of the giant American flag complete, and the 710th Area Support Medical Company, members of the Illinois Army National Guard, was headed to Afghanistan. | Chicago Tribune >>

Paul Caruso at the National Earthquake Information Center says sound waves from an explosion that’s part of the test registered as a 3.8 magnitude earthquake on U.S. Geological Survey seismographs as far away as Kansas. | CBS News >>

Chris Lynch is easy to spot walking the Pentagon’s sprawling corridors: He’s the guy wearing a hoodie and sneakers amid all the crisp military uniforms. Instead of a placard with his name, the sign outside the office he leads says “Rebel Alliance.” | Stars and Stripes >>

Stockwell usually competes with a “Never Forget 9/11/01” sticker on her American flag-themed bike. The sticker is just above the handlebars, so she can see it while she’s racing. | Military.com >>

“Deployments are simple,” said Cyle Briggs, 29, who served in Iraq in 2008-2009 as an infantryman with the Marine Corps Reserve out of Broken Arrow. “You wake up, go on a mission, come back, work out, go to bed and do it again. Civilian life is hard. There’s bills and finding a job so I can feed my family.” | Stillwater News Press >>