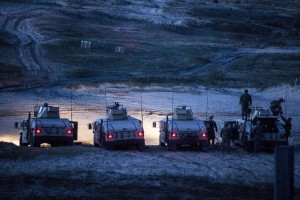 In most cases, when an employer pays a signing bonus to attract new workers, that payment is understood to be essentially unrecoverable. But the Pentagon has a different understanding — and it’s ordering the California National Guard to claw back thousands of dollars paid to soldiers who reenlisted to fight in Iraq and Afghanistan. | NPR >>

THE ISSUE: There are an estimated 21.6 million veterans in the United States. Among them, nearly 9 million are enrolled in health care provided by the Department of Veterans Affairs. About 4.3 million veterans get disability compensation from the VA and nearly 900,000 have been diagnosed with post-traumatic stress disorder. | Military.com >>

Iraq’s parliament has passed a law forbidding the import, production or selling of alcoholic beverages in a surprise move that angered many in the country’s Christian community who rely on the business. | The Guardian >>

“Right now we see them very focused on trying to establish their caliphate, the Khorasan caliphate, inside Afghanistan,” General John Nicholson said in an exclusive interview with NBC News. | NBC News >>

Kurdish forces claimed new advances against Islamic State in the battle for Mosul on Sunday, but the extremist fighters hit back with a third straight day of attacks in the northern city of Kirkuk and a new strike in western Anbar province. | The Wall Street Journal >>

A trio of technicians from Fort Bragg, North Carolina, took top honors in the annual EOD Team of the Year competition, besting five other teams in a series of mental and physical obstacles at Virginia’s Fort A.P. Hill. | Army Times >>

Sergeant Major of the Marine Corps Ronald Green and his advisers also are seeking more input from the fleet Marine Corps on opportunities to serve in special duty assignments like embassy security, recruiting stations and the drill instructor billets. | Marine Corps Times >>

This fall, the Navy revealed it was suddenly removing all 91 of its enlisted ratings. This so-called “modernization” effort has been billed as a way to broaden training and career opportunities for sailors. It also satisfies the Navy’s desire to strip “man” from its titles, i.e. fire controlman, corpsman and seaman. | Military Times >>

“The purpose is to raise awareness for the approximate number of 22 veterans that commit suicide in this country each day, that’s one every 72 minutes,” says Aaron Krebs, who participated in the march. | WKOW >>

About once a month, Dave Misiura and his three partners at the Lox Hair Wax Co. meet near Richmondale at a place they call Asgard, the mythological home of the Norse god Odin, to cook a batch of Battle Wax. | Military Times >>