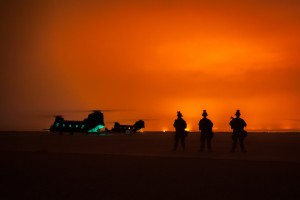 The US House Armed Services Committee faces a shake-up in the Nov. 8 election that will affect defense policy and dollars. Aside from any additional members possibly voted out of office, the committee is sure to lose 10 members, including the chairmen of the Seapower and Military Personnel subcommittees. | Defense News >>

This month, workers will finish the exterior of the 71,000-square-foot clinic, which is expected to open September 2017 after interior work is done, said John Shealey, assistant director of the VA’s Northern Indiana Health Care System. The $38 million facility, to be staffed by up to about 190 employees, will be called the St. Joseph County Health Care Center. | Stars and Stripes >>

Post Falls Police said around 9:30 a.m. they received a 911 call from a man who said he was suicidal and outside the Real Life Ministries on North Cecil Road. When police arrived on scene, they found a man with a gun to his head under the cross in the church parking lot. | KPNX >>

Iraqi Kurdish peshmerga forces stormed an Islamic State-held town northeast of Mosul on Monday, clearing a pocket of militants outside the city while Iraqi troops wage a fierce urban war with the jihadists in its eastern neighborhoods. | Reuters >>

The Panjshir Valley, about 50 miles north of Kabul, has been one of the safest places in this country. But a growing number of inhabitants fear the Taliban’s recent resurgence could bring violence to their quiet region. | Stars and Stripes >>

Working about 28 miles from ISIS-controlled territory in Iraq, researchers have discovered evidence of a large Bronze-Age city that dates approximately to the year 3,000 BC, according to the University of Tübingen in Germany. | Fox News >>

Ever feel like going on an adventure but the sofa’s just a little too cushy to make the effort? Youtube has partnered with USA Today for a project that will ensure you get a sense of real adventure without ponying up for expensive safety gear or risking actual death. | Maxim >>

The incident happened Oct. 27 at Marine Fighter Attack Training Squadron 501, a fleet replacement squadron for the Marine Corps consisting of 20 F-35B aircraft. One of the aircraft experienced a fire in the weapons bay while conducting a training mission over Beaufort, 1st Lt. John Roberts, a spokesman for 2nd Marine Aircraft Wing, told Military.com. | Military.com >>

The US Navy’s brand new $4 billion warship is an incredible technological feat. The futuristic DDG 1000 Zumwalt-class destroyer is equipped with two guns that can hit targets from a stunning 80 miles away. The only problem? Rounds for the guns cost over $800,000 each. And the Navy has now decided that it can’t justify spending that much. | Gizmodo >>

But the former airman believes he was just doing his job when, in November 2009, he jumped into a cold Afghanistan river in hopes of saving two 82nd Airborne Division paratroopers and again, two days later, when he charged an enemy fighting position across an open field to take out fighters armed with rocket-propelled grenades, a machine gun and sniper rifles. | Military.com >>

But on April 4, 2009, Thomlinson’s life changed forever when his armoured vehicle drove over a Taliban roadside bomb while on patrol. Both of his legs were amputated and he suffered multiple other injuries. | Huffington Post >>

About 120 motorcycle riders took off from the Huntington Beach Pier on Sunday morning for the second annual Veterans Honor Ride, a fundraiser and show of support for veterans hosted by volunteers from the Association of the United States Army and the American Legion. | The Orange County Register >>