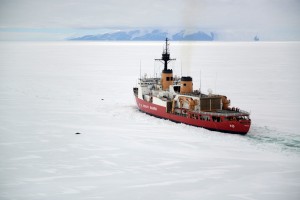 The crew of the Coast Guard Cutter Polar Star operates near two seals off the shore of Antarctica, Jan. 16, 2017. David Mosely | Coast Guard >>

The move comes just a few months after Congress dropped a ban on the procedure for veterans and their spouses, the result of a yearslong push from advocates who called the restrictions unfair to individuals who sacrificed for the country. Limited fertility counseling is already available to veterans, and active-duty troops who suffer service-related injuries are eligible to receive advanced fertility treatments including IVF services. | Military Times >>

Organizers of a glitzy inaugural ball for military veterans canceled the event late Wednesday, citing “security reasons and events beyond our control,” according to its website. But what led to the unraveling of the Veterans Making America Great Again gala, which was slated for Friday night, is a bit murkier. | The Washington Post >>

A group of military veterans gathered in the office of Arizona Sen. John McCain on Thursday to demand that he lead a vote against confirming Rex Tillerson as secretary of state. About 10 veterans came to McCain’s senate office and stood in military formation. The protest was live-streamed on Facebook. | Business Insider >>

On Jan. 17, al-Abadi told reporters that he wants a “thorough investigation” of the decision-making process by which American military forces went from “liberating” the country from Saddam Hussein’s regime to “occupying” it. | Task and Purpose >>

Afghanistan suffered its deadliest year on record for journalists in 2016, according to a report released on Thursday which said the country is the second most dangerous for reporters in the world after Syria. As least 13 journalists were killed last year, the Afghan Journalists’ Safety Committee (AJSC) said, adding that the Taliban was behind at least ten of the deaths. | News 18 >>

But American guidance to Iraqi counterparts all the way up to the commander-in-chief has taken on greater significance in the Mosul campaign, which entered its fourth month this week, as advisers integrated with the Iraqis to an unprecedented level for conventional U.S. forces. | Reuters >>

“I am tremendously proud of the Modular Handgun System team,” said Army acquisition executive Steffanie Easter in the release. “By maximizing full and open competition across our industry partners, we have optimized private sector advancements in handguns, ammunition and magazines and the end result will ensure a decidedly superior weapon system for our warfighters.” | Army Times >>

The Navy is likely to announce that Stackley is the new Navy secretary shortly after Trump is sworn in Friday, according to two defense officials who were not authorized to publicly discuss the decision. Stackley will remain as SECNAV until the Trump administration names a replacement, which can take a few months to work through the system — Mabus was not sworn in until about four months into the Obama administration. | Navy Times >>

Next week the Marines will get their skis and snowshoes as they prepare to spend six weeks in remote town of Porsangmoen – less than 200 miles from Norway’s Arctic border with Russia – on a first-of-its-kind deployment that is fueling Cold War-era tensions with Moscow. | Marine Corps Times >>

A veteran walking across the county has made his way to West Texas. He’s doing it to raise awareness on the struggles vets go through after serving time in the military. Ernesto Rodriguez started walking in Clarksville, TN on Veteran’s Day. So far, he’s walked over 900 miles. His goal is to walk 2200 miles to Los Angeles to honor the 22 veterans who take their lives every day. | News West 9 >>

They arrived in groups, many of them arm in arm with the brothers they’d served with on the front lines across Europe. Many sported their uniforms and carried the gear that had saved their lives in wartime. Just as they’d done before, they were fighting for a righteous cause. This time, however, they weren’t marching against the Germans. They were marching on Washington, and the year was 1932. | Task and Purpose >>

The Eisenhower Presidential Library is collaborating with the Kansas Combat Veterans Motorcycle Association (CVMA) Chapter 21-1 to raise awareness of the staggering number of veterans who commit suicide every day. The two organizations are joining forces on “Operation Veterans Suicide Outreach” as part of their War on Suicide. Outreach events are scheduled Jan. 22, April 22, July 22, Sept. 22, Oct. 22 and Dec. 22 at varying locations. | Abilene-RC >>