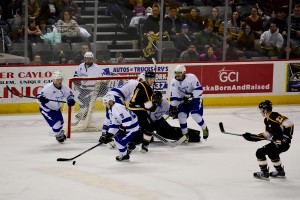 Senior Airman Robin Knight, from Davis, Calif., clears the puck away from his goal in the first period of the 4th Annual Army vs. Air Force Hockey Game Jan. 7, 2017, at the Sullivan Arena in Anchorage, Alaska. John Pennell/Army | Military Times >>

Department of Veterans Affairs Secretary Bob McDonald on Tuesday criticized President-elect Donald Trump for not yet naming his successor and expressed concern that his reform efforts would be undone. With VA employees across the country watching on live-stream video, McDonald gave his last speech to an advisory committee of outside leaders who oversee VA transformation. Besides blasting the transition process, he reiterated messages to the Trump administration to not derail progress at the agency, and to Congress to pass VA reforms that didn’t make it through the Senate last session. | Stars and Stripes >>

Esteban Santiago made his first court appearance yesterday for allegedly shooting and killing five people at the Fort Lauderdale airport on Friday. He may face the death penalty if convicted. The Pentagon has confirmed that he is a National Guard veteran who saw combat in Iraq. But experts say it’s not right to draw a connection between his military service and violent behavior. Veterans say it’s a myth they have to confront all the time. | NPR >>

The highest-ranking enlisted soldier in Congress will serve as the Democrats’ top voice on veterans issues in the House this session. Minnesota Rep. Tim Walz, a retired command sergeant major from the Army National Guard, was named ranking member of the House Veterans’ Affairs Committee late Monday after Rep. Mark Takano, D-Calif., dropped his bid for the post. | Military Times >>

As previously reported, the IMC has approximately 80,000 troops encircling Mosul that are fighting against approximately 8,000 entrenched ISIS radical Islamic terrorists. By various media accounts, 500,000+ Mosul civilians (largely of the Sunni Muslim sect) are trapped inside Mosul as “slave labor and human shields” for the ISIS terrorists. The US military contribution to the IMC numbers about 6,000 troops. The US contingent, with an “advise and assist” mission, is called Operation Inherent Resolve (OIR). Lt. General Stephen Townsend commands OIR. | Fox News >>

A double bombing by the Taliban near the Afghan Parliament office compound in Kabul on Tuesday killed dozens of people during the early evening rush hour, officials said. The assault in the Afghan capital was the deadliest of several high-profile attacks on Tuesday, including an explosion at a government guesthouse in the southern province of Kandahar that wounded the provincial governor and the visiting ambassador of the United Arab Emirates. | The New York Times >>

Iraqi forces fought their way into more districts of Mosul but advances in the city’s southeast were being slowed by Islamic State’s use of civilians for cover, military officials said on Tuesday. The United Nations said civilian casualties had streamed into nearby hospitals in the last two weeks as fighting intensified in the jihadist group’s last major stronghold in Iraq. | Reuters >>

A group of military experts are planning a visit to Spokane to determine whether Fairchild Air Force Base would be a good fit for the nation’s next generation of air-refueling tankers. The Spokesman-Review reports the Air Force has scheduled a meeting for Thursday to study the potential impacts of housing the new Boeing KC-46A Pegasus airplanes at Fairchild. | Stars and Stripes >>

Some 285 troops from Camp Lejeune, North Carolina, will find themselves above the Arctic circle in a matter of days as the first six-month rotation of a brand-new Marine force arrives in Norway. In an interview with Military.com this month, Maj. Gen. Niel Nelson, commander of Marine Corps Forces Europe and Africa, said the new deployment will be known as Marine Rotational Force Europe — and the first troops arriving as part of the rotation will be a reinforced infantry company from Lejeune’s 1st Battalion, 2nd Marines. | Military.com >>

An East Texas Purple Heart recipient is turning his personal fight with cancer into a mission, to shine a light on the challenges facing veterans. In November, Navy Veteran Joshua Johnson, who served from 2006 to 2010 in places like Afghanistan and Iraq, was told he had six months to live after his rare form of cancer, which is inoperable and incurable, progressed. Johnson tells us that he’s not going to let the diagnosis stop him from pushing on for veterans and his family. | KLTV 7 >>

The “hyper kid from the Bronx,” as Nelson Lebron calls himself, started boxing when he was 5. Now almost 42, he still competes, all over the world. His career stats are 180 wins, 36 losses, 6 draws. He has a black belt in seven styles of mixed martial arts, plus numerous belts in other styles. This month, he will be inducted into the Action Martial Arts Magazine Hall of Honors. | The Virginian Pilot >>

The event was put together by 13 therapeutic horseback riding organizations for more than 200 riders from across Texas of all ages and disabilities. The Chisholm Challenge has evolved into the largest competition for equestrians with disabilities in the whole world. One of the competitors on Tuesday was Jonathan Merchant, a quadriplegic Army veteran. He was told by doctors 17 years ago that he would never be able to ride a horse again. | CBS21 DFW >>