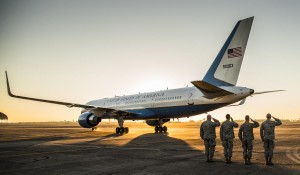 During the first two trials, psychiatrists administered three doses of the drug in eight-hour sessions to PTSD patients who’d not yet responded to other typical treatments of the condition. While under the influence, patients lay on a futon in a room filled with candles and flowers, and listened to music. | Cosmopolitan >>

The Department of Veterans Affairs’ massive network of hospitals and clinics has been under a microscope since scandalously long waiting lists and allegations of cover-ups burst into public. The management morass seemed so intractable that in 2014, President Obama pushed out a decorated former general, Eric Shinseki, and hired a former chief executive of Procter & Gamble, Robert A. McDonald, to sort it out. | The New York Times >>

House and Senate negotiators announced a compromise Tuesday that would permit the Pentagon to forgive debts owed by thousands of California National Guard soldiers who received improper bonuses during the height of the wars in Iraq and Afghanistan. | Los Angeles Times >>

The men – and one woman – from the Lions of the Tigris unit gathered on Wednesday in Shayyalah al-Imam, a village near Mosul, with some of their leaders expressing deep distrust of the politicians and saying Iraq’s governance must change once Islamic State is defeated. “Iraq needs serious reforms,” said Sheikh Mohammed al-Jibouri, the top commander of the tribesmen. “Only serious reforms will lead to the unity of Iraq.” | Reuters >>

China has long been concerned that instability in Afghanistan will spill over into the violence-prone Xinjiang region, home to the Muslim Uighur people, where hundreds have died in recent years in unrest blamed by Beijing on Islamist militants. | Reuters >>

Brig. Gen. Haider Fadhil of the special forces told The Associated Press his men were now about four kilometers (2.5 miles) from the Tigris river, which slices the city in half. He said the 19 neighborhoods constituted less than 30 percent of the part of the city east of the Tigris. | The Washington Post >>

The Navy is pressing private contractor Hewlett Packard Enterprise to pay for credit monitoring services for sailors affected by a data breach that exposed more than 130,000 social security numbers, a defense official familiar with the ongoing investigation said. | Navy Times >>

The provision would require the Army secretary to “rapidly identify and field a commercially available capability that meets tactical requirements, can integrate at the tactical unit level, is substantially easier for personnel to use and requires less training,” according to the National Defense Authorization Act report language released Wednesday. | Defense News >>

The Army plans to terminate SDAP for these soldiers over a 12-month period. On March 1, their SDAP, which is currently $150 a month, will be cut in half, and the rest of the pay will be phased out for no more than 12 months, Taylor said. | Army Times >>

“My cousin and I wrote a screenplay,” Collazo said. “If it wasn’t for the military, I would’ve never been inspired to write it. … The protagonist is a veteran returning from combat and entering a civilian life.” | CNBC >>

“There wasn’t time to think or react or do anything besides get away from the individual,” Andy Payne said. The third year engineering student is also an Army veteran who’s done two tours of duty in Iraq. | 10TV >>

For just as long, some veterans have held things in, never feeling comfortable relating their experiences to those who hadn’t been there and seen war firsthand. And a segment of the public remained in the dark. | Naples Daily News >>