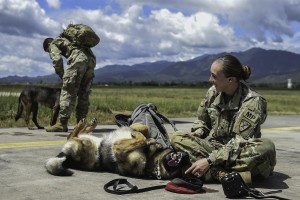 Members of Iraq and Afghanistan Veterans of America met with Blumenthal, the ranking member of the Senate Veterans Affairs Committee, in Stamford on Thursday. The group is pressing to reverse $3.4 billion in cuts over five years to housing stipends offered under the GI Bill. | Hartford Courant >>

Moral injury is not classified as a mental disorder such as the more familiar post-traumatic stress disorder, or PTSD. By definition, moral injury can develop when a veteran experiences or witnesses acts during war that violate deeply held moral beliefs. It may stem from the act of killing or witnessing death and may leave veterans struggling with their faith and experiencing inner conflict. | The Post and Courier >>

Iraq, OPEC’s second-biggest producer, will increase crude exports by about 5 percent in the next few days after an agreement to resume shipments from three oil fields in Kirkuk. | Bloomberg Markets >>

In a tiny eastern Afghanistan town in November, rifle-toting Islamic State fighters pounded on the door of relatives of Qismat Amin, a 25-year-old former interpreter for the U.S. Army, demanding he come out. Those inside insisted he’d left years ago and hadn’t been back. But months later, the militants returned and confiscated the family’s crops, saying they could be reclaimed only in exchange for Amin. | San Fransisco Chronicle >>

Iraq’s Prime Minister Haidar al-Abadi “had ordered the fast tracking of death sentences, despite international concerns over Iraq’s judicial process,” as Alison reported. She added that the “U.N. High Commissioner for Human Rights warned against the move, citing U.N. findings on a lack of due process and a reliance on torture to extract confessions.” | NPR >>

Paul Chelimo’s tale about becoming a U.S. Olympian is unusual, and the story behind his silver medal performance in the men’s 5,000 meters is stranger still. We’ll work backwards, starting with his race in Rio on Saturday night. | NPR >>

Our Air Force is now the smallest it has been since before World War II. In terms of manpower, it is smaller than at any time since it was made into a separate and independent service in 1947. Since the end of the Cold War, force structure and inventories of air and space craft have been sacrificed to pay for readiness and military personnel bills. | Air Force Times >>

In the most direct public warning to Moscow and Damascus to date, the new US commander of American troops in Iraq and Syria is vowing to defend US special operations forces in northern Syria if regime warplanes and artillery again attack in areas where troops are located. | CNN >>

The odds of a military veteran being a victim of suicide are frighteningly high.
Some statistics show as many as 22 veterans die by their own hands each day. Josh Butts and his fellow soldiers who served in the 1st Battalion, 503rd Infantry Regiment during combat in Ramadi, Iraq, lost two members of the battalion to suicide last year. | Tulsa World >>

The owner of Because We Can, Because We Care horseback therapy ranch on the outskirts of Santa Clarita says he doesn’t embrace the traditional school of thought that involves dominating the animal. | The Santa Clarita Valley Signal >>