On Monday, the VA reported that the disability backlog decreased by more than 1,600 claims last week, meaning about 238,000 veterans are waiting125 days or more for their disability compensation claim decisions from the VA. While the number of total claims increased slightly, there are still about 518,000 veterans overall who have claims pending at the VA.

In order to reduce the backlog to zero by the end of FY 2015, the VA will need to process about 6,000 claims per week over the next 40 weeks. Overall, the backlog is down more than 62 percent since March 2013. The graphs below show the change in total pending claims and backlogged claims since last year, as well as the projected decline through 2015. 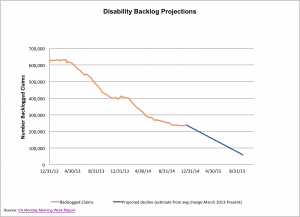 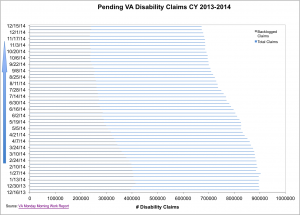 While the decrease in the backlog has been relatively steady and there has been some good news in the improvement in the accuracy rating for processing claims, there is still much to be done. Specifically, the number of pending appeals has increased by 13 percent in the same timeframe. As the VA works to decrease the disability backlog, it must not forget the disability claims and appeals not grouped in the backlog bundle.

In early 2014, IAVA released the 2014 Red Tape Report, which includes multiple recommendations for improvements to the VA disability compensation system.

The VA has made great strides in reducing the backlog since last year, yet the work to ensure that the nation’s veterans and their families do not have to wait for the benefits promised to them continues.

* Note: IAVA continues to track and report backlogged claims to include claims not counted in the VA’s Rating Bundle. IAVA does this because we believe that claims from all veterans and their families should be included in the goal to end the VA Backlog by 2015. For more on this, please see IAVA’s blog post from July 22, 2013, “Is the VA Moving the Goalpost?“