Read: Tumbleweeds on Capitol Hill, but IAVA Fills the Void!

The House and Senate are out on recess this week, so traffic is light, but still plenty going on. We continue to see successes in terms of support for our priorities as a result of our IAVA members in town for our recent Storm The Hill. If you really want to have an impact, please apply for the next one! Congress enjoys hearing directly from their constituents. You want to see some #VetsRising? Catch up with what they – and previous Stormers – did at StormTheHill.org!

Tuesday evening, Chief Policy Officer Melissa Bryant and Research Director Stephanie Mullen attended an excellent event at the Center for New American Security highlighting an amazingly diverse group of women veteran authors. All panelists exemplified IAVA’s #SheWhoBorneTheBattle campaign as they discussed the unique challenges women veterans face, the unspoken burdens of and recognition of intersectionality in the service of women in the military, and much more. 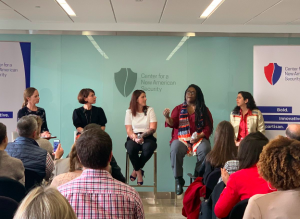 This week, Melissa, Steph, and I were back on the Hill talking with Congressional offices on IAVA’s Big 6 Priorities, including learning more about the new task force at the House Veterans Affairs Committee focused on women veterans. Melissa also had a discussion with Department of Defense senior officials on the financial readiness of our military forces. In their recent survey, approximately 70% of active and reserve service members reported being comfortable in their finances. Approximately 44% of the same reported being in a better financial position than last year. This is a positive trend, and IAVA will continue to advocate for policies aimed at continuing these improvements.

I also participated in my fourth press conference in as many weeks – this time alongside VSO partners in defense of the Post-9/11 GI Bill and education benefits as the Department of Education considers weakening protections for veteran students (5:30 mark). I also appeared briefly in a BBC program, Cut Through The Noise, focused on the state of the Afghanistan conflict and the future of American forces there (8:00 mark). 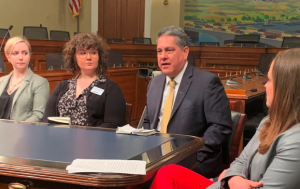 And on Friday, Steph attended Department of Labor’s monthly meeting with Veteran Service Organizations to discuss the 2018 Employment Situation Report for Veterans, which shows the employment trends and unemployment rates for veterans across gender, era of service, disability status and more. See Steph’s recap video here. Meanwhile, I attended a legislative conversation hosted by Nurses Organization of Veterans Affairs (NOVA) to discuss IAVA’s priorities and agenda for the 116th Congress.

And our rockstar policy intern, Minho Shin, published his first blog today! We’ve been hearing about issues surrounding privatized military housing for a while now, but Minho brings his own powerful narrative to this issue as an Army Reservist currently living in one of these housing facilities impacted by poor management and unsatisfactory safety standards. Read up on his take on this important issue here.

And, for IAVA, that was a quiet week in DC. Stay tuned as next week both House and Senate are back in town, we’ll hear live testimony from Joint Chiefs Chairman Dunford, Acting Secretary of Defense Shannahan, and VA Secretary Wilkie. We’ll be trackin’!

Don’t see your Member of Congress as cosponsor here and here? Contact them by going through our Take Action page to ensure their support!