Sunday, February 12, 2017 marks the second anniversary of the signing of the Clay Hunt Suicide Prevention for American Veterans (SAV) Act into law. IAVA led the fight on this legislation and we’ve carefully followed its progress. 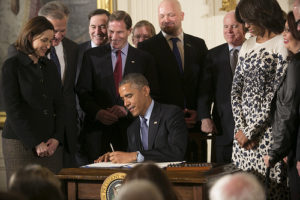 The Act is named after Clay Hunt, a former Marine and friend of IAVA who after leaving a distinguished military career and came home to continue his service as leader at IAVA and Team Rubicon. But as Clay was fighting for his brothers and sisters in arms, he also struggled with depression and post-traumatic stress. And he lost that battle, eventually taking his own life in 2011.

The Department of Veterans Affairs estimates that 20 veterans a day die from suicide. IAVA’s own members have shared their stories of heartache and loss. Nearly half of those who took IAVA’s member survey told us they know at least one post-9/11 veteran who has died by suicide.

We’re heartened to see steady progress, but we know it’s been imperfect. We’ve been working with VA to navigate those bumps. The VA team overseeing this is definitely committed to getting this right and we’re committed to making sure they do.

Clay Hunt may be gone, but he will never be forgotten. We won’t stop until this issue is addressed for every veteran. You can count on that.