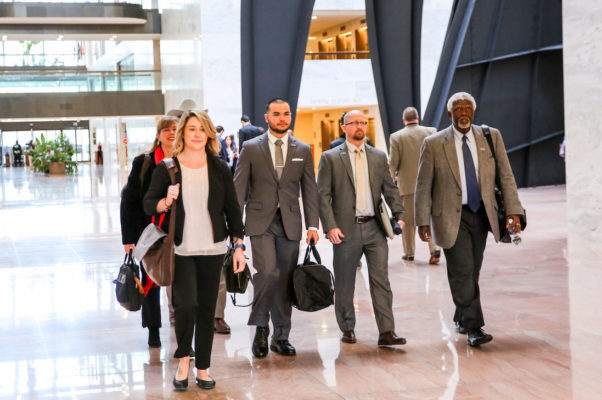 If you would have told me exactly one year ago that I would be in Washington, DC, on Capitol Hill, telling my story to Senators, Representatives and their staff and speaking about issues near and dear to my heart — well I just wouldn’t have believed it!

Iraq & Afghanistan Veterans of America’s (IAVA) has given me that opportunity. Storm the Hill week is truly opening up the eyes of our lawmakers as veterans have the opportunity to sit down face to face with them. During this time, I had the unique ability to advocate for real issues that veterans are facing on a day-to-day basis. Each veteran has a unique story, and each of the veterans I was with had a different experience and perspective to share that truly humbled me to my knees!

I am a recently separated U.S. Army Combat Medic of 10 years, who has been deployed to multiple combat theaters throughout my time in service. I am also like the 44% of Post-9/11 veterans who have had suicidal ideations due to my mental health, more specifically Post-Traumatic Stress Disorder (PTSD). In January of 2019, I walked the fine line between life and death! Thoughts and memories would flood my head, making me disoriented and not able to make rational decisions. This was rock bottom and I knew it! The thoughts of — “But how do I get up from this bottomless pit? I feel like I have left crumb trails for everyone to find me at this point! But why doesn’t anyone see me?”

Reaching out for help was one of the hardest things I have ever had to do! That is the case for thousands of veterans everyday. I thought that other veterans have it way worse than myself. “I don’t need or deserve help since I have friends without arms and legs,” I would say to myself on a daily basis. “They have it worse than I do.”

Then came the time to make the biggest decision of my life, and that was — Do I fight or give up?  A decision to give up becomes permanent! SUICIDE is the only word in my vocabulary that I can associate with SO MANY DIFFERENT EMOTIONS. Before I finally gave up though, I somehow found the ground in that bottomless pit and was able to stand up! And when I finally “stood up”, people saw me for what I thought was the first time in 10 years!

I was fortunate enough to have outside healthcare resources other than the VA, because the VA does not fund or give grants to some alternative treatments that have been found to work best for veterans suffering with PTSD (Post-Traumatic Stress Disorder) or depression/anxiety. These therapies are different from the typical medications that alter the chemical balance in your brain, altering your mental status. These types of treatments focus on alternative methods to combat PTSD,  getting at the root cause of the trauma instead of masking it with medications. I can say with 100% conviction that this type of treatment, especially EMDR (eye movement desensitization reprocessing), saved my life!

I walked out of that facility a new person with a new outlook, but at the same time I was the same Zack! I had to face my trauma head-on and accept it. And for the first time in my life, that’s exactly what I did! I accepted and faced my trauma head on! For the first time ever, I  finally was at peace with the traumatic events that had occured that had been torturing me and ruining my life! NOT ANYMORE was I going to allow my past to dictate my future, nor was I allowing myself to change what I had accomplished thus far!

I left that house knowing that I will do anything so another veteran doesn’t get as deeply lost as I was. It took roughly 7 months before I was comfortable telling my story, though that was only to family and close friends. That’s when IAVA came into the picture, when I was looking at different Veteran Service Organizations (VSO) that I would like to work with and advocate for.

Some may call it fate; others may say it was coincidence. I don’t care what you call it, but IAVA announced their 2020 Storm the Hill dates and released the application just a few days shy of the 1 year anniversary of my checking into the PTSD Recovery Center. I applied immediately, and after an extensive selection process full of interviews and essay questions, I was selected to represent over 400,000 Post 9/11 veterans that are members of IAVA, as well as thousands of veterans of other foriegn wars.

Arriving in Washington, DC, was very surreal, being as it was the first time I had ever been in our nation’s capital! Meeting the other veterans that I would be spending the next week with really opened my eyes to the extensive issues that we face with the VA. The first day we went over what IAVA’s basic legislative agenda is, The Big 6. This focuses on the top 6 issues that veterans have expressed are priority through IAVA’s most recent member survey that was released on March 4th, 2020. This extensive survey, besides basic data about demographics, also covered feedback on a variety of questions, such as whether members approved of allocating funds from the military for the border wall.

But the most startling data came with regards to veteran suicide. 62% of all veterans have known someone who has lost their life to suicide; 67% of veterans reported having had thoughts of suicide since joining the military! Both of those statistics have increased dramatically since the last survey was conducted in 2019. More importantly, it shows that we are failing our veterans, and that includes me as well.

17 — That is the number of my friends, my brothers, my heroes that I had to render one final salute to their flag-draped coffins. Some of those salutes were to the infamous boots and rifle ceremonies. And that is only from the past 9 years. I know veterans who have known way more than 17 veterans who died by suicide, and some who don’t know a single one. I wanted my story to be heard, and I was willing to be put in the most vulnerable position, telling my story, to speak for other veterans who may not be able to tell their story yet.

Our farewell dinner somehow snuck up on us and it was bittersweet. I had become so close with all the stormers that it was going to be hard to get back to the reality of daily life! Yet I was so excited to get back home to see my son and also to continue advocating for veterans and anyone who suffers from PTSD. Looking back, now that we are a month out from our Storm The Hill, I am able to see how much those 6 days in DC changed me as a person and also my aspirations in life! IAVA, Southwest Airlines, Phoenix Park Hotel, and all of those who donated through my Facebook fundraiser — there are simply no words or actions that could adequately express my sincere and deep gratitude for everything you have done for me during that week in DC. To my family, thank you for making sure I was able to have this experience at the drop of a hat. I Love You All!

Most importantly, to each and every veteran out there — If you are going through a hard time, going through your troubled waters, PLEASE REACH OUT to someone for help! Though those seas seem high and wild, I promise you your calmest waters are ahead of you. People are here and want to help. THANK YOU FOR YOUR SERVICE!