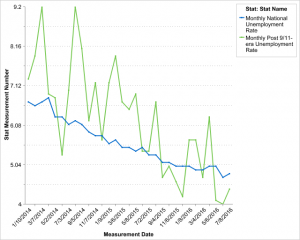 Over the last two years, there has been a downward trend in unemployment rates among veterans.  This is likely in large part due to a focus on veteran employment efforts nationally. IAVA’s advocacy work has focused on this for years. Through our efforts, we celebrated the implementation of the New GI Bill and the Vow to Hire Heroes Act among others. But our work is not done. It’s tempting to abandon some of the policies that have led to these successes. By doing that, we risk reversing these trends that we’ve worked so hard to improve.

In IAVA’s recently released 7th Annual Member Survey Report, we saw a similar trend in unemployment rates among IAVA members. Unemployment decreased from 10 percent in 2014 to eight percent in 2015. However, our members also highlighted the employment continues to be a challenge, particularly during transition. Forty-five percent of respondents also said they felt they were underemployed. IAVA members are telling us just how important it is that employment initiatives continue with a focus on the transition period and an emphasis not on simply finding a job, but more importantly, a career.