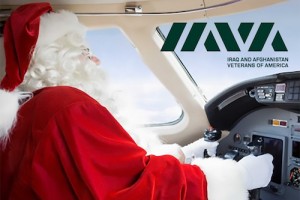 Holidays are a special time to be with family. And over the last decade and a half of war, we know IAVA members have spent more holidays away from their families than just about anyone.

Well, Santa loves America’s veterans. And he knows you all have been VERY good this year! You’re serving your community, you’re working hard, you’re busting your butt in school, you’re a great parent, and you’re what America is all about! You’re #VetsRising. And Santa’s extremely grateful!

That’s why he stopped by IAVA HQ with a special early present for all the good little boys and girls: tickets to fly IAVA vets home for the holidays.

Thanks to our generous friends at Southwest Airlines (the official airline of IAVA), we’re flying several lucky IAVA members and their families home for the holidays! On planes. (Not Santa’s sleigh).

Tickets are round trip (or one way) but must be used BEFORE January 1, 2017. If you’re interested, you must be an IAVA member registered in IAVA’s Virtual Veterans Hall. Register by December 22 at noon. We’ll draw winners to get free roundtrip tickets home for the holidays, and let you know if you’ve won by 8 PM on December 22.

And yes, you can get one for your spouse or kid. But they’re limited. And we expect them to go faster than Rudolph on Christmas Eve. If you want to be in the mix, tell us why you’ll make the most out of this special holiday gift in 300 words or less. And if you aren’t selected, we hope you stay involved and help us make every day Veterans Day.

Enter online today for a chance to win. There are no dues–you paid your dues already when you served in uniform. So IAVA membership and programs are ALWAYS 100% free.

This is just one example of why IAVA membership is one of the best deals around.