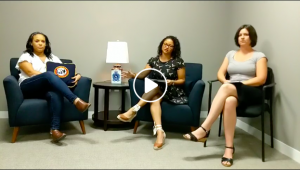 IAVA is the leading veterans empowerment organization for this era veterans and represents nearly 425,000 veterans, family members and supporters, providing advocacy and assistance for veterans across the country. IAVA’s advocacy team works everyday in Washington, DC implementing critical policy changes that impact the veteran community through our 2018 Big 6 Policy Agenda. Simultaneously, IAVA’s Rapid Response Referral Program (RRRP), IAVA’s premier case management program, works with veterans and family members across the nation seeking assistance for a wide variety of needs, including those at-risk of suicide and family members who have lost a veteran or service member to suicide.

Patrice Sullivan, one of IAVA’s Senior Veteran Transition Managers (VTMs) with RRRP works on the front lines every day providing support for veterans and their families. Patrice is also the survivor of military suicide and lost her boyfriend, best friend and Marine, to suicide in 2005. This Facebook Live event was hosted by the Tragedy Assistance Program for Survivors (TAPS) and Patrice provided a meaningful introduction by sharing her own personal experiences losing her boyfriend to suicide and the important and transformative role that TAPS has played in her journey toward healing and recovery. IAVA and TAPS work closely together to ensure that those who have suffered the loss of a veteran or servicemember have the support, resources and sense of community that they need.

This event covered IAVA’s Policy and RRRP team wins over the past three months, which were substantial. IAVA gained a total of 80 new co-sponsors for the Burn Pits Accountability Act, VA Medicinal Cannabis Research Act and the Deborah Sampson Act, increased national media presence and executed an impactful Suicide Awareness Activation on the National Mall as part of IAVA’s quarterly Storm the Hill. On the RRRP side of the house, IAVA served 158 clients and provided front line intervention and support for 6 veterans at-risk of suicide and 25 veterans and family members facing homelessness. We hope that you were able to join our event and if you missed it you can check it out here to learn more about the positive impact IAVA is having on veterans and their families every single day. Please stay tuned for IAVA’s next quarterly Facebook Live event which will happen in December.

If you or a veteran you know is in need of support, RRRP’s Veteran Transition Managers are standing by to assist. Contact us today.

Ensure that your Member of Congress supports all of IAVA’s Big Six priorities and your voice is heard by going through our Take Action page here.