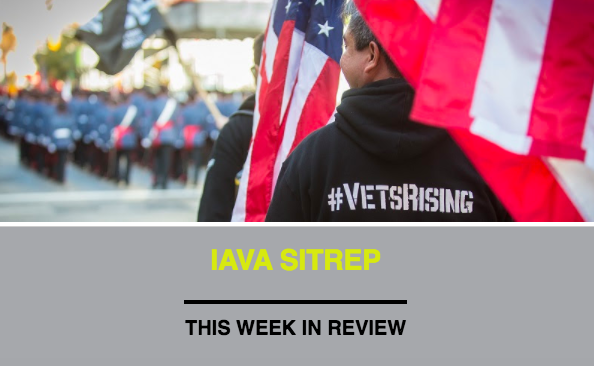 “I think now most agree there needs to be an end to the U.S. military presence in Iraq and Afghanistan in terms of combat footing …,” Butler said. “At the same time, those who have fought there and lost friends and family members there want to make sure to go through the drawdown for the right reasons and the appropriate timetable.” That is why Butler said it is important to have conversations about intentions and strategic goals.

By Keita Franklin and Kim Ruocco

COVID-19 is exacerbating the suicide crisis. Calls to suicide hotlines have increased by 800 percent, according to some estimates. Texts to crisis lines have seen a similarly alarming spike, doubling in some cities.

ConnectingVets.com: A 29-year-old Marine is dying of a rare brain cancer. Burn pits caused it, his family says.

Duva is dying of cancer. He and his family are adamant — Duva’s cancer was caused by toxic exposure during his service in Afghanistan, where pits of burning trash smoldered and smoked all day and all night, spewing noxious fumes into the air he breathed.

Rep. Jackie Speier (D-Cal.), chair of the House Armed Services Committee subcommittee on military personnel, unveiled the I Am Vanessa Guillen Act. It’s a long-awaited bill that defines sexual harassment and makes it a crime in the military. It draws its name from a social media effort in which service members around the country shared their own stories of sexual trauma and demanded reform.

September is National Suicide Prevention Month. We want to establish this moment, Sept. 22, 2020, as the first annual Veteran and Military Suicide Prevention Day; and we’re asking all of you, military and veteran alike, to join us.

An outbreak at a Hawaii veterans home has killed 18 residents and yielded three different investigations by state and federal officials. There have been 69 residents at the Yukio Okutsu State Veterans Home that have tested positive for the coronavirus.

“It would be completely irresponsible if the 116th Congress ends its legislative work this December without having at least passed this bill,” stated Jeremy Butler, CEO of Iraq and Afghanistan Veterans of America, in recent testimony before the Veterans’ Affairs Committee. “There has been plenty of talk but not nearly enough action to address the worsening crisis of veteran suicide.”

Federal News Network: VA workers are the US health care system’s fail-safe. Why isn’t the VA listening to them?

Many VA workers are concerned that VA officials in Washington, D.C. won’t do what is necessary to ensure we can do our jobs and keep veterans safe. That’s because the response to the pandemic from VA Secretary Robert Wilkie and the Department of Veterans Affairs has been an unmitigated disaster.

Federal News Network: How did VA do with rescheduling appointments canceled because of the pandemic?

The Department of Veterans Affairs office of inspector general has found critical flaws in two important functions at the Veterans Health Administration. They have to do with financial controls and whether it has a good grip on the millions of veterans’ medical appointments canceled because of the pandemic.

The Department of Veterans Affairs is offering debt relief to veterans impacted by natural disasters, including the wildfires plaguing the West Coast and Hurricane Sally.

Positive results on the Primary Care-Posttraumatic Stress Disorder Screen were associated with an increased risk for suicide mortality among veterans, according to study results published in JAMA Network Open.

Housing advocates aren’t wondering whether the ongoing coronavirus pandemic will lead to an increase in homeless veterans, but instead how big the increase will be.

Veterans tell us transition can be stressful and confusing. They also let us know during this time they are often flooded with so much information they can’t digest and retain it all. VBA is using data/information collected from veterans to identify how VA can make changes that meet veterans’ needs. VBA connects with veterans up to a year before leaving the military to inform them about benefits and services through the Transition Assistance Program (TAP).

The House passed bipartisan legislation Tuesday to change the Department of Veterans Affairs motto to be more inclusive of women who served. Some female veterans and advocates, such as Iraq and Afghanistan Veterans of America, have pushed for a gender-neutral version of the motto since 2017. The VA initially rejected the proposal.

After more than two months of declining active cases of the coronavirus among Department of Veterans Affairs patients and staff, those cases are beginning to rise again. But since Sept. 17, VA recorded more than 500 additional active cases, an about 20.8% increase in less than a week.

Senators have ramped up efforts to add three new diseases to the Department of Veterans Affairs’ list of Agent Orange-related diseases, pressing the House and Senate Armed Services Committees to include them in the final version of the national defense policy bill.

The Department of Veterans Affairs told Fox News that it has cancelled an event on race and microaggressions after appearing to defend it as in compliance with President Trump’s recent executive order on critical race theory.

The Boston Globe: Judge rules firing of Holyoke Soldiers’ Home boss was ‘invalid’; 76 veterans had died of COVID-19 at facility

Governor Charlie Baker and his state health and human services chief lacked the authority to fire Bennett Walsh as superintendent of the Holyoke Soldiers’ Home, where at least 76 elderly veterans have died of COVID-19 amid the pandemic, a judge ruled Monday.

To date, more than 200,000 veterans have linked their chronic medical issues  — including cancer and respiratory illnesses —  to the exposure of dangerous toxins released from burn pits. Matthew Betley, an author and former Marine who deployed to Fallujah, Iraq in 2006 described himself as a “supremely fit 35-year-old Marine captain” who began to develop symptoms of lung damage within a month of redeploying to the U.S.

The Department of Veterans Affairs is still denying close to 80% of all burn pit related claims veterans file. VA officials told Capitol Hill lawmakers on Wednesday that 2,828 of the 12,582 disability claims filed by veterans related to burn pit exposure from 2007 to 2020 were approved — about 22%.

The House passed sweeping bipartisan legislation Wednesday that would give up to $174 million during the next five years to state and local organizations that provide suicide-prevention services to veterans and their families.

Local VA facilities could expand in-person services to offer more routine care if downward trends in coronavirus cases continue, says Secretary Wilkie, but they have to be cautious to protect vulnerable patients.

Active cases of coronavirus at Veterans Affairs hospitals have increased again in recent days as the total number of deaths from the pandemic among VA patients topped 3,300 this week.

The House unanimously passed sweeping legislation on Wednesday aimed at improving veteran mental health care and preventing suicide. Now, that bill heads to the White House and the president to become law.

On the same day that House lawmakers questioned whether Veterans Affairs officials are doing enough to help veterans with serious injuries believed caused by burn pits, Senate lawmakers advanced legislation to extend new testing and benefits for veterans who have suffered a range of toxic exposure injuries.

The Department of Veterans Affairs should do a more thorough job of determining the cause of veterans’ suicides on VA campuses, the government’s chief watchdog agency stated in a recent report.

About 60% of veterans surveyed reported feeling disconnected from their family, friends, or community. Half of veterans agreed their mental and physical health has worsened since social distancing themselves.

The U.S. Department of Veterans Affairs announced Thursday that it is allowing home mortgage loan deferments for veterans who have experienced financial hardships due to the COVID-19 pandemic.

Senators are upping the pressure on Congressional leaders to ensure a measure that would expand care to thousands more veterans sick from Agent Orange makes it into the annual national defense bill.

Veterans receiving government benefits will see a cost-of-living boost in 2021, if Social Security officials approve one for their recipients later this year.

Military veterans voted for President Donald Trump by a margin of nearly 2-to-1 in 2016 – this time things could be different.