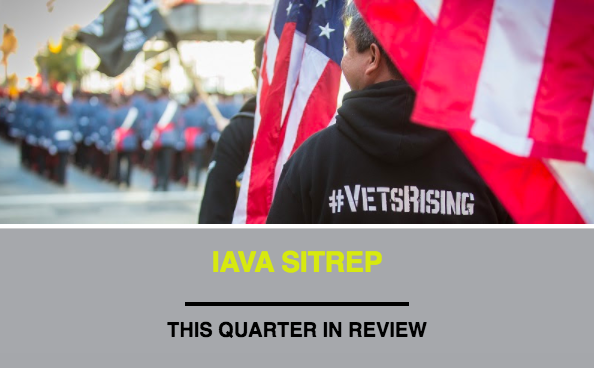 As the leading voice for the post-9/11 veteran community, IAVA continues to advocate on behalf of all veterans and create awareness about issues and topics impacting our community. Below are important articles and news sources from the past quarter:

Military veterans exposed to toxins from burn pits while serving overseas are fighting to get disability pay for respiratory illnesses linked to the smoke. The Iraq and Afghanistan Veterans of America (IAVA), a nonprofit organization that fights for veteran rights, conducts a Burn Pit and Toxic Exposure survey every year. Last year’s survey revealed that 86 percent of respondents reported exposure to burn pits or other toxins, and that 89 percent of those exposed reported symptoms that might be caused by that exposure.

Experts testified at a Senate Armed Services Committee hearing about the long-term health effects of exposure to burn pits. Tom Porter, executive vice president of government affairs for the Iraq and Afghanistan Veterans of America organization, told senators that he suffered lung damage due to burn pit exposure. “Before I went downrange, I had completely healthy lungs. Shortly after I arrived in Kabul in 2010, where the air is particularly bad, my lungs had a severe reaction and became infected. It was controlled with medication, but I was diagnosed with asthma as soon as I got back home a year later,” he said. “I have to still take the medications to keep breathing.”

As it stands, nearly 80 percent of veterans’ requests to have suspected burn pit ailments acknowledged by the government are rejected, said Tom Porter, executive vice president of the Iraq and Afghanistan Veterans of America (IAVA). “We owe it to them to at least ensure that they get the health and disability benefits that they deserve for volunteering to go into harm’s way,” said Porter, a former Navy officer who spent a year in Afghanistan in 2010 and 2011 and has been diagnosed with asthma. An IAVA poll found that 82 percent of those questioned said they were exposed to burn pits or other airborne toxic chemicals. And of these people, 90 percent said they are or may be suffering from symptoms linked to that exposure.

“I’m more optimistic than I have been at any time working on this issue,” said Tom Porter, executive vice president for government affairs at Iraq and Afghanistan Veterans of America, who has been lobbying Congress to pass the “PACT Act.” Though Biden did not make any new commitments during his remarks yesterday, Porter noted the significance of the president saying that the federal government would err on the side of providing exposed veterans medical care and benefits, even if the science is not yet definitive.

Texas Public Radio: Burn pits: Behind the ‘silent killer’ ignored by the U.S. government for years

The U.S. military used burn pits for years. They’re sometimes as large as 10 acres. They use them at many bases abroad, but especially in Iraq and Afghanistan. Clouds of black smoke from the pits would billow for miles, and pilots sometimes reported using the smoke as visual confirmation of a base’s location. A survey from the Iraq and Afghanistan Veterans of America finds that nearly 90% of post-9/11 veterans were exposed to the smoke from the burn pits. And that smoke was toxic.

Newsweek: What Is a Burn Pit? Joe Biden Unveils Plans to Help Veterans in State of Union Address

The VA uses the Airborne Hazards and Open Burn Pit Registry, which it launched in 2014, to track and monitor vets exposed to burn pits during service. According to the Iraq and Afghanistan Veterans of America (IAVA) it is estimated that 3.5 million service members and veterans were exposed to burn pits.

Jeremy Butler, chief executive of Iraq and Afghanistan Veterans of America and a New York City resident, said that while the city has a large population of veterans, its VA hospitals are not widely used in part because they face fierce competition from world-class private hospitals. “It’s a long process, and we need to think holistically,” Butler said of the restructuring proposals. “And we need to stay away from the ‘This is my city and keeping the hospital open because it’s my city is the only thing I care about’” mentality.

Jeremy Butler, CEO of the Iraq and Afghanistan Veterans of America, an advocacy group headquartered in New York City, said the VA system is in great need of an update. He said he didn’t think people should make snap judgments about the far-reaching plan. “Let’s focus on maximizing veterans’ access to these facilities,” Butler said. “Part of that you do by making sure that they’re designed in a way that is appealing to the new generation of veterans.” The different opinions on the hospital plans could signify an age divide.

(MSNBC) IAVA Joined MSNBC to Discuss our Afghan Allies and Advocates’ Efforts: Matt Zeller, Senior Advisor for IAVA, spoke with MSNBC’s Andrea Mitchell on the plight of our Afghan allies and the advocates dedicated to ensuring we keep our country’s promise and bring them to safety…Watch here.

The Washington Post: Thousands of Afghans were evacuated to the U.S. Will America let them stay?

“Six months ago exactly, these people were telling us they ‘would do anything to support veterans in this cause.’ Whatever we needed, they were ‘right there’ with us, they were ‘just as appalled,’ ” Matt Zeller, a senior adviser to Iraq and Afghanistan Veterans of America (IAVA) and a founder of the nonprofit group No One Left Behind, said in February.

NPR: Left Behind, A War Story

In 2014, Khan, who worked side-by-side with U.S. forces from 2004 to 2008, applied for a special immigrant visa to the U.S., and it was meant to streamline the immigration process for Iraqis and Afghans who helped U.S. forces. Matt Zeller is an Army veteran, senior adviser to the Iraq and Afghanistan Veterans of America and board chair of the Association of Wartime Allies. Zeller is still working on getting Afghan interpreters out of the country.

Most of those who escaped the fall of Afghanistan in August were sequestered on U.S. military bases under humanitarian parole status, a short-term designation that provides no access to the government services and resettlement programs other refugees normally enjoy. The best way Congress can show its support for military personnel is to support the Afghan Adjustment Act, said Matt Zeller of Iraq and Afghanistan Veterans of America.

“It can already be a struggle for women veterans to access high-quality breast cancer care even without a long commute. I was proud to testify in support of this bill in Committee and IAVA applauds Senate passage of the MAMMO for Veterans Act,” stated Iraq and Afghanistan Veterans of America Executive Vice President Tom Porter.

(Blavity) How Systemic Inequities Kept Many Black Veterans From Building Black Prosperity: “The negative effects many Black veterans faced under the GI Bill may seem irreversible, but there is still an opportunity to rectify these inequities,” wrote Jeremy Butler, CEO of IAVA…Read more.

“Veterans consistently and passionately have communicated that cannabis offers effective help in tackling some of the most pressing injuries we face when returning from war,” Iraq and Afghanistan Veterans of America CEO Jeremy Butler told a joint House and Senate committee.

Iraq and Afghanistan Veterans of America’s CEO spoke about how medical cannabis is “proven…to be much more effective than traditional opioids and pain pills” for many military veterans.

The War In Ukraine

Politico: Biden faces another global crisis. This one resonates differently at home.

“It’s an unfortunate sign of the political times that there would be this much division around one of the major parties in terms of how we respond, or maybe even if we respond in some cases, to someone that is literally disrupting the world order at a magnitude that we haven’t seen since the end of World War II,” said Jeremy Butler, chief executive officer of Iraq and Afghanistan Veterans of America.