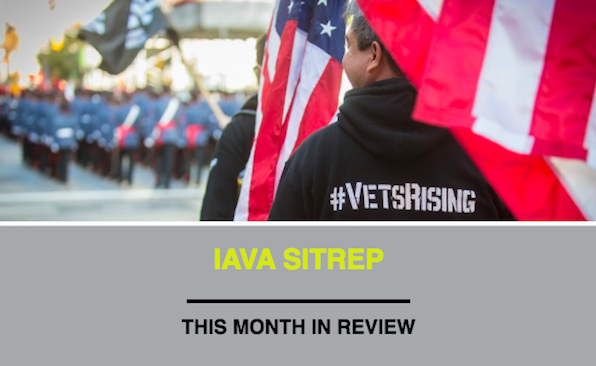 As the leading voice for the post-9/11 veteran community, IAVA continues to advocate on behalf of all veterans and create awareness about issues and topics impacting our community. Below are important articles and news sources from the past month:

Task & Purpose: Rep. Madison Cawthorn decided that a hearing on burn pits was a good time to clean his firearm

Rep. Madison Cawthorn (R-N.C.), a 26-year-old lawmaker and sweetheart of the far-right, “fiddled with his black pistol” for several minutes during a House Veterans Affairs Committee hearing on Wednesday, according to The Daily Beast. The hearing’s focus was the lasting impact of toxic exposure from burn pits on U.S. service members — a topic that advocacy groups have fought to have more attention on for years. “Here we are taking time out of our day, including the representatives, to talk about a very important issue — a life or death issue for many veterans — and it’s like, I’m sorry am I boring you? You’re not paying attention,” Jen Burch, an Air Force veteran who currently works with the Iraq and Afghanistan Veterans of America (IAVA) and who spoke during Wednesday’s hearing, told Task & Purpose.

Marine Corps Times: Everyone wants to help military toxic exposure victims. Not all want to pay.

In recent months, congressional lawmakers have rallied around the goal of providing better care and better benefits for troops exposed to toxic chemicals during their military service. But how much that will cost remains a problematic stumbling block for legislators hoping to advance those new ideas.  Wednesday’s event was designed to restart legislative work on the Promise to Address Comprehensive Toxics (PACT) Act, a sweeping veterans toxic exposure bill introduced last summer that could lead to new benefits or services for as many as one out of every five living American veterans. “Cost wasn’t a driver when Congress and the White House sent us to war, so we shouldn’t shy away from paying for what was incurred,” said Jen Burch, a communications associate with Iraq and Afghanistan Veterans of America who served with the Air Force in Afghanistan. “The time to act is now, for the sake of the current veterans and our future veterans.”

Times Leader: Younger veterans: ‘Guys get out and they just want to move on’

Honorably discharged in March of 2021, Colon, 27, of Kingston is about to embark upon his next journey as a student veteran and full-time member of the workforce. Unlike veterans of previous generations, however, Colon is not a member of either the Veterans of Foreign Wars or American Legion, although he says he’s been to a few VFW posts. While recognizing the importance of the services these organizations provide, “a lot of them just aren’t appealing to a younger generation,” Colon says of the locations themselves. Aside from the VFW and American Legion(s) — both of which are staples for servicemembers reintegrating to society, navigating the VA and healthcare and benefits — there are a number of other charity organizations working to assist veterans in a number of ways, such as: Hope for the Warriors; Iraq and Afghanistan Veterans of America (IAVA).

Senate Veterans’ Affairs Committee Chairman Jon Tester (D-Mont.) and Ranking Member Jerry Moran (R-Kans.) today hosted a roundtable discussion with veterans stakeholders and advocates to discuss measures to improve the servicemember-to-veteran transition and suicide prevention efforts. “Mental health and suicide prevention has long been one of Iraq and Afghanistan Veterans of America’s (IAVA) top legislative priorities,” said Hannah Sinoway, Executive Vice President at IAVA. “IAVA is grateful to Chairman Tester and Ranking Member Moran for holding this roundtable discussion to address specific mental health challenges for transitioning service members, removing the stigma around getting help, and the importance of improving veterans’ access to life-saving care and resources—including IAVA’s Quick Reaction Force program. These are top priorities for our organization, and we look forward to continuing to work with the Committee to incorporate these solutions into future legislative efforts.”

Marine Corps Times: What the controversial ‘accountability’ Marine officer is up to next

Until a series of controversial social media postings demanding accountability from senior military and political leaders led to his eventual military court-martial and discharge, now former Marine Lt. Col. Stuart Scheller was a star on the rise in the Corps. Now that Scheller is a civilian, kicked out of the Corps as part of a plea deal right before Christmas, he told Marine Corps Times in a phone interview that he plans to transform his calls for accountability into concrete action. In December 2021 a bipartisan group of veterans’ organizations helped secure the inclusion of the Afghanistan War Commission in the 2022 NDAA. Although it will not produce results or actionable items for at least four years, the inclusion of the commission in the NDAA, according to Iraq and Afghanistan Veterans of America’s Matt Zeller, is indicative of the latent political power of veterans and veterans’ organizations.

WFTV 9: Independent commission to investigate all aspects of war in Afghanistan

As the world watched heartbreaking images of the chaos in Afghanistan following the U.S. troop withdrawal over the summer, many service members said they were left questioning the value of their service. Now a law signed by President Joe Biden this week will create an independent commission to investigate the nearly 20-year war from start to finish. “I don’t think there was ever a truly agreed-upon understanding as to why we were in the country and what our aims and goals were going to be,” said Jeremy Butler, Chief Executive Officer of Iraq and Afghanistan Veterans of America (IAVA). IAVA has been pushing for an independent panel to investigate the war in Afghanistan and this week, that goal became a reality.

Months after the United States pulled out of Afghanistan, the country is receiving international food aid — but much of it is being diverted to the Taliban, says Matt Zeller of No One Left Behind. Meanwhile, Afghan families who arrived in the United States need sponsors and translators to adjust to living here, and Congress is establishing a bipartisan Afghanistan War Commission to review the history of the 20-year war.