Read: I enrolled at the VA! And it wasn’t that bad! It was kinda good!

Today I decided to fulfill my New Year’s Resolution (before the end of January!) and head over to the VA to complete my enrollment.

I was wearing my USMC backpack when I went, which I didn’t do on purpose (I just had a lot to carry today), but it helped me feel protected. I figured no one would mistake me for anything but a veteran with that giant pack. I got an “Oohrah” from a vendor outside. When I went through security, the guard asked if I was a veteran or a guest. I said “veteran.” He then asked for my card. I explained that I didn’t have one (that’s why I was there). He jumped up to help and pointed me in the right direction.

I actually got a little bit emotional once I got in the building. From the outside, it’s imposing. And I had made this such a big deal in my head. Once I was there, it was a nice space and there were a few other people who looked like me. I actually took a lap before heading to “Eligibility” just to check it out, and I was pleasantly surprised. 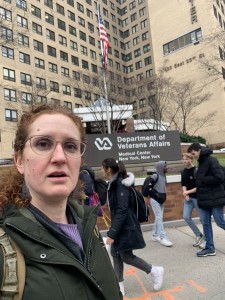 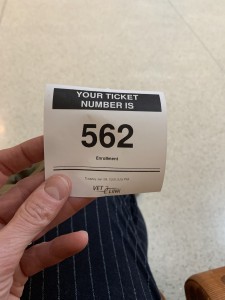 Then I went to the kiosk and took a number. Less than 5 minutes later, I was talking to a very professional and very helpful VA employee. He answered all my questions. I’m not sure if he was oversimplifying it… but I think I might have overcomplicated VA benefits in my head. He said I get comprehensive VA care. I don’t have any co-pays for 5 years post separation (I have one year of eligibility left because I got out in 2015) and then I’ll have some co-pays, but it sounds like they’re cheaper than what I would pay under even TRICARE. I have to investigate that more.

So… not to brag, but he said I filled out the online portion perfectly! He said I was probably the second person he’d seen in his entire career who had done so. I asked if I got a gold star on my VA card for it. (Apparently no…) What this tells me is that the VA is used to folks not getting the paperwork right, and they help them work through it. That was nice to hear. The sad news is that my card won’t come in the mail for at least two more weeks. I was hoping to have it today!

Finally, he asked if I had chosen my primary care doctor yet. I told him I got an appointment, but I wasn’t given a choice of provider. He said that women have fewer choices, because we are all enrolled in the women’s center. But, if I don’t like my doctor I can always switch. It was interesting to me that they automatically vector the women away from the general population of male veterans.

In the civilian world, primary care doesn’t have to be gender-segregated. I appreciate that the VA is putting more resources toward women veterans, but I’m concerned that segregating women from the rest of the population doesn’t address the overarching climate issues. Women are never going to be adequately cared for at the VA if we have to be segregated to be protected from the evils of the bigger system.

That being said, at least for today there was no need for protection… it was a pretty good experience!