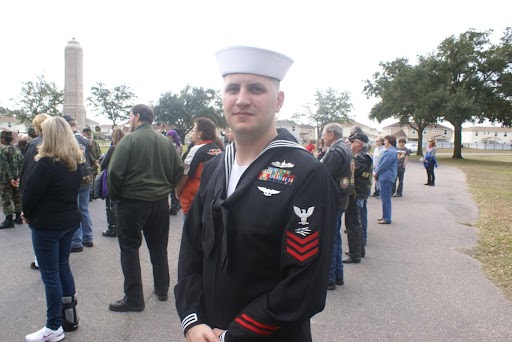 I am a medically retired United States Sailor, and I’m gay.

Having served in the United States Navy from 2003 to 2020, a huge portion of my time in service was under the “Don’t Ask, Don’t Tell” or “DADT” policy. During those years, I saw many of my friends get kicked out of the Navy under DADT and many even died by suicide. But there were others like me that survived the discriminatory policy but not without a couple of close calls.

My survival has left me constantly conflicted – I feel grateful for not suffering some of the horrors my fellow comrades did. However, sometimes I feel guilty for focusing on myself when others were facing tragedies. It’s unbelievable that while we were fighting to ensure the freedoms of others, our own freedoms were being denied to us.

In 2002, I surprised my family by wanting to follow in my father’s footsteps and joined the US Navy. I went into active duty following my graduation from high school. During basic training, I was always looking over my shoulder, constantly worried that my sexuality would get me discharged from the military. This was a common theme during my service. Sometime later in my career, I learned that some of my fellow shipmates tried, unsuccessfully, to have an investigation launched against me by our command leadership with the goal of having me discharged. It was my Command Master Chief, the senior enlisted leader of my command, who stopped that from happening. He believed in my skills, acknowledged my work ethic, and basically protected what he saw as a successful career. If he hadn’t intervened, who knows what my life would be like today.

My best friend wasn’t as fortunate and died by suicide driven by false allegations that would’ve resulted in his discharge from the Navy. Following that tragedy, I decided to step up and become a sort of advocate, speaking for so many who were afraid to speak for themselves.

This inspired me to join Citizens for Repeal which is now known as the Modern Military Association of America, and created and led the Virginia Chapter. In 2009, I marched in Washington D.C. in protest of discrimination and to advance LGBTQIA+ equality. I also toured with the Servicemembers United’s “Voices of Honor,” and shared my story in cities across the US. Additionally, I was asked by HBO to be an interviewee for “The Strange History of Don’t Ask, Don’t Tell.”

Despite knowing that my outspokenness could lead me to be discovered and discharged, I advocated for my cause anyway. I spoke to members of Congress, wrote letters, and used my voice to be a champion for myself and others like me – and I was finally heard in 2010, along with thousands of other veterans, when in a late-night vote by the Senate, the repeal of DADT was approved. That day I lay in my bed and I cried because I knew my life was about to change. It wasn’t until September 20, 2011, that the full repeal went into effect. I served the remaining 9 years of my career open and honest about who I was. It wasn’t always amazing and there are still pockets of injustice in our military. However, I was content with being out, proud, and serving my country.

In 2020, during my last couple of months of active duty, I was selected to join IAVA in Washington D.C. to bring attention to the issues that plague our veterans during their annual advocacy event on the Hill. This opportunity to continue my work in advocacy has given me purpose in life. As a veteran and the spouse of an active-duty sailor, I’m encouraged by the work IAVA continues to do on behalf of all veterans. This is the kind of work that will reverberate for my husband and his peers when he retires and for generations of veterans to come. Happy Pride Month.